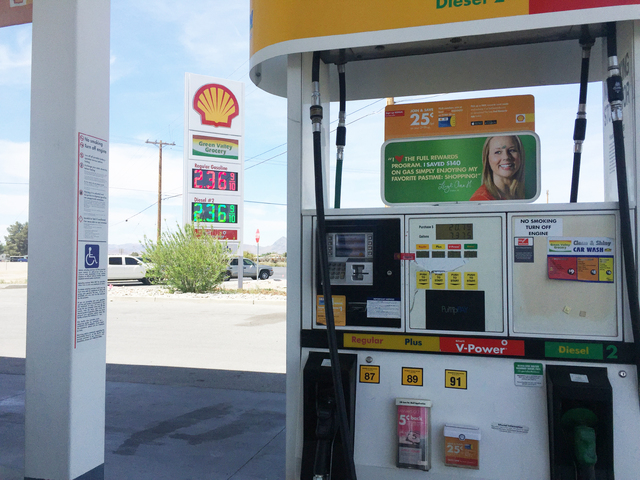 Although gas prices held steady in Pahrump this week, Nevada is near the top of most expensive gas prices in the nation.

The cheapest advertised retail cash price of gasoline in town on Tuesday was $2.15 per gallon, the same as last week, but in the state gas prices rose 2 cents per gallon to $2.45, according to GasBuddy.com.

“Gasoline prices increased last week in 49 of 50 states, thanks to a sudden jump in the price of crude oil tied to speculation of a change or freeze in oil output at this weekend’s meeting in Doha, Qatar,” said Patrick DeHaan, senior petroleum analyst for GasBuddy. “At the conclusion of the talks over the weekend, no decision was made, not at all a surprise given the recent disagreements between major players Saudi Arabia and Iran. The lack of a clear vision to cut or even freeze crude oil production will likely lead to a sharp sell-off in oil markets to start the week as global oil production continues to outpace demand.

“While typically we’re used to seeing gasoline prices racing higher in the spring, the direct impact of this weekend’s meeting could cause gasoline prices this week to reverse temporarily as oil markets react.

The price has risen 67 cents in the past seven weeks in Pahrump, but is still lower than this time last year, as during the same week in 2015 the average gas prices in town were 2.47 a gallon.

The survey group came up with the average through a daily survey of 1,130 gas outlets in Nevada.

The rise in the state was below the national average, which increased 6.9 cents per gallon in the last week to $2.11 per gallon.

Despite the heightened figures, gas prices in Nevada are lower now than the same time last year, as prices this week were 34 cents per gallon lower than the same day in 2015 statewide.