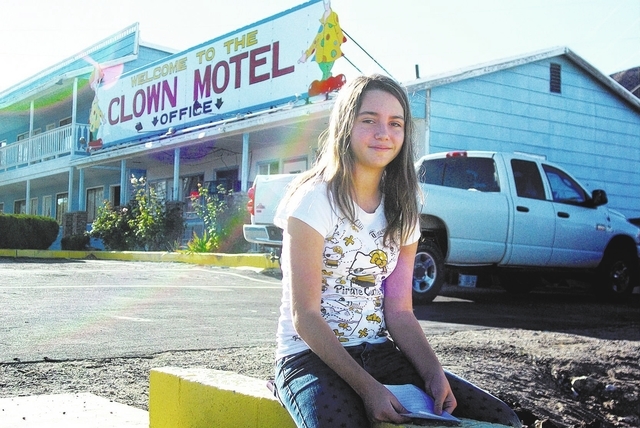 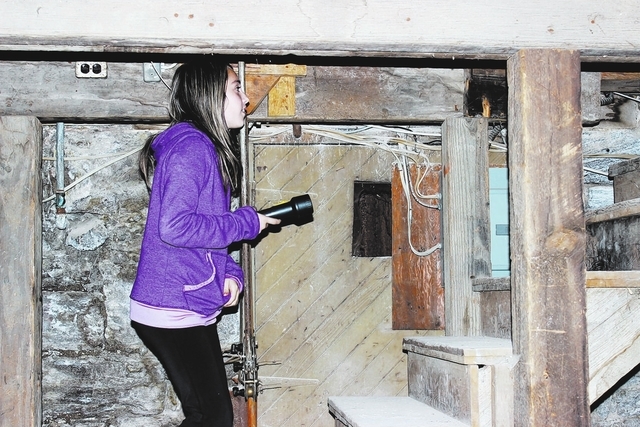 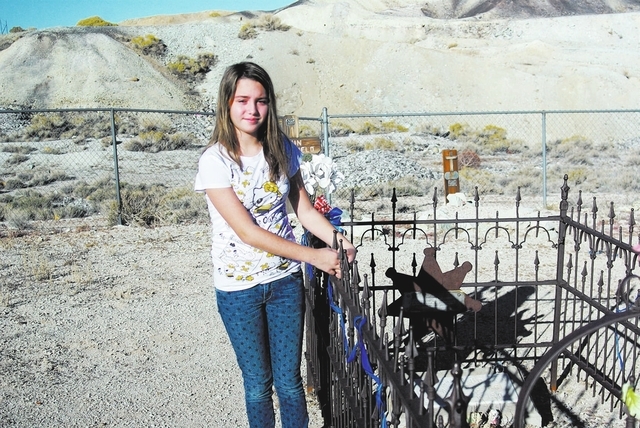 Halloween is upon us and soon all the little children will be coming out dressed in bright, colored costumes as ghosts, demons and ghouls of all kinds — with the exception of one young lady in Tonopah named Katherine Mizzi.

Mizzi is not the typical junior high school cheerleader, not by any means. She likes to hang out at the old Tonopah Cemetery near the Clown Motel. To her, ghosts and demons are real and she does not shy away from them, in fact she likes spirits and her favorite thing to do is ghost hunt.

Mizzi lives with her father Joe Mizzi and uses their home, the Clown Motel, as a base of operations.

Tonopah is the perfect place for hunting spirits with many of the buildings on Main Street claiming to be haunted. In fact, Katherine lives in one of the most haunted towns in Nevada.

The Mizpah Hotel is the most famous haunted place in Tonopah. They have maids and employees that can tell some interesting tales. The hotel is known for haunted rooms and employees even point guest to the hot spots of spiritual activity.

There are the less famous buildings, too. Just talk to anyone on that street and they will tell some sort of ghost story. Right across the street from the Mizpah is a place with good eats and great coffee. Even Cori Gonzales, the owner of the Kozi Korner Deli &Coffee Bar, will talk about spirits.

“My old building was built around 1907. I rent from the Masons upstairs and this place used to be a bank and a pharmacy. I have felt a presence inside the store and we have seen bread fall off the shelf and a bell has gone off on its own. My father passed away, and I think it might be him,” Gonzalez said.

Katherine has been interested in ghost hunting since she was 6 years old, which happens to coincide with the first time she ever watched her favorite show, “Ghost Adventures,” on the Travel Channel.

Living in the motel, Katherine has seen many ghost hunters come through town. Her father said his daughter gets excited when a group of paranormal researchers come to Tonopah. She talks to the hunters and asks them all sorts of questions.

Her father said, “I would usually talk to them to see if it was OK if Katherine could talk to them. We have had many teams come through like Las Vegas Paranormal and then a couple of teams that have radio shows. “Ghost Hunters” came through, “Ghost Adventures” and the “Haunted Highway” with Jack Osborne. My daughter always hits them up for information.”

When it comes to Katherine and her ghoulish interests, her father thinks it’s “OK.” The young girl has grown up with the graveyard and it’s more like a backyard to her than a cemetery; ghost hunting is just an extension of her chosen environment.

“I am glad she is interested in it and she is excited about it. She loves doing it. I got her the ghost hunting kit for her 10th birthday, but she has been interested in hunting since she was 6,” he said.

Katherine has been going to the graveyard for a long time and will usually go there with friends.

“Katherine clings onto people,” her father said. She will take tourists down there and she will always offer them a tour. She has gone there at night time too. She will go out there with customers, with older kids. She has seen things out there and has come back scared,” Joe said.

On Oct. 18, Vegas Valley Paranormal, a Las Vegas Paranormal group, arrived in Tonopah and part of the team stayed at the Clown Motel. Joe asked the group leader if his daughter could ask questions and see part of the investigation. He did more, he let her tag along during setup and let her go see the building with an adult Katherine had known for a long time, Janice Six, a longtime resident of Tonopah.

Six has known Katherine since she was born, is a good friend of the family and agreed to walk with Katherine.

“She is very intuitive and very into learning about ghost hunting. She really wanted to be in contact with the spirits and she was really eager to learn. I think that was really neat. She did not seem to be afraid at all. I was really surprised she was there. I think the kids are very susceptible and open-minded and would make good hunters,” Six said.

The target of the investigation was Bill Tucker’s building, which is next to the former and now demolished Montgomery Ward. Tucker had Vegas Valley do a preliminary investigation, which revealed some signs of paranormal activity, and the group was back to do a more thorough investigation.

“Since I have renovated the place, I really have not experienced anything. My cat gets a little excited now and then. I live in the basement of the building and have really never seen anything. I do hear some noises now and then,” Tucker said.

With permission, Katherine jumped right into the investigation. Right away she saw spirits and picked up ghostly readings with a borrowed K-2 meter. The K-2 meter is hand-held and detects electromagnetic fields, which paranormal experts believe spirits emit. As she entered the building, she held a doll with an EMF detector embedded inside it. It lit up like a Christmas tree and got Katherine even more anxious to start.

She was unafraid and helped set up cameras. She learned how to detect spirits with a Mel Meter, another form of EMF detection device.

Katherine explored with her friend Six and discovered some “shadow people.”

“I was pretty scared last night. There was one time I was walking down the hallway and I saw this shadow standing in the doorway. I also heard some footsteps, too,” she said.

Katherine wants to be a ghost hunter when she gets older. She even put together a small group at school.

When asked what she would ask a ghost if she came face to face with one she replied, “I would ask them, if I could, what it is like being a ghost. I slept with a bunch of pillows after the investigation. I told my dad that I was protecting myself from the ghost, but I had fun that night.” She also said she could not wait to do it again.