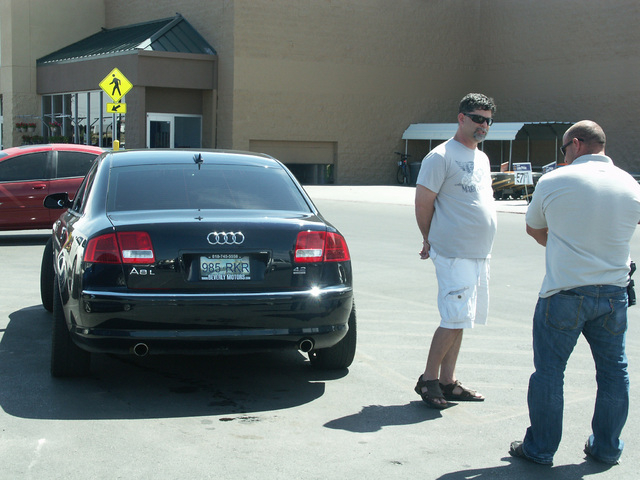 The chairman of the Nye County Republican Central Committee was arrested on Monday and preliminarily charged with impersonating a police officer.

Bill Carns, 45, was taken into custody just before 3 p.m. after Nye County Sheriff’s detectives received information the vehicle he was driving had fictitious license plates attached to his black Audi.

According to the press release, detectives initiated a traffic stop in the parking lot of Walmart along Highway 160 and made contact with Carns, who allegedly identified himself as a Las Vegas Metropolitan police officer.

On Tuesday, Carns said he was a Metro police officer during a brief stint in the mid 1990’s.

“I knew he was just jamming me up and I imagine that this charge will never see the light of day,” he said. “The way to do it is fighting it in court and that’s exactly what I’ll do. I would be surprised if the DA’s office even got this case but we’ll see.”

Carns said he will be at the Aug. 3 court date “with bells on.”

“Mr. Carns was employed with us from February of 1995 to May of 1996,” Rodriguez said on Tuesday. “He was classified as a police officer and separated from the department in May of 1996, when he resigned.”

Nye County detectives said Carns provided a Metropolitan Police Department personnel number with the purpose of avoiding a citation for registration violations during the initial stop.

Detectives also noted Carns was contacted on two previous occasions by authorities who allege he provided a Metro personnel number to avoid getting a citation.

Carns disputes that claim as well.

“I got pulled over and cited by a Nye County Sheriff’s Office deputy four or five years ago and I never said anything about having been a cop because it was not pertinent,” he said. “I got pulled over by (Nevada Highway Patrol) a couple of months ago and I was debating back and forth with this guy based on an equipment violation. He asked me if I was a cop and I told him no but I used to be one with Las Vegas Metro back in the nineties.”

Nye County Sheriff Sharon Wehrly did not respond to an email inquiring about the nature of the two previous incidents by press time.

When asked what he thought made the officer contact him on Monday, Carns said he didn’t know.

“My vehicle is registered to a different entity outside of Nevada and when he was looking at that registration and saw that I had Nevada insurance, he was debating with me about the fact that I have to have the car registered here,” Carns said. “I can’t get into some of the specifics on this, based on the attorney that I’m speaking with so we’re just going to have to leave it at that. ”