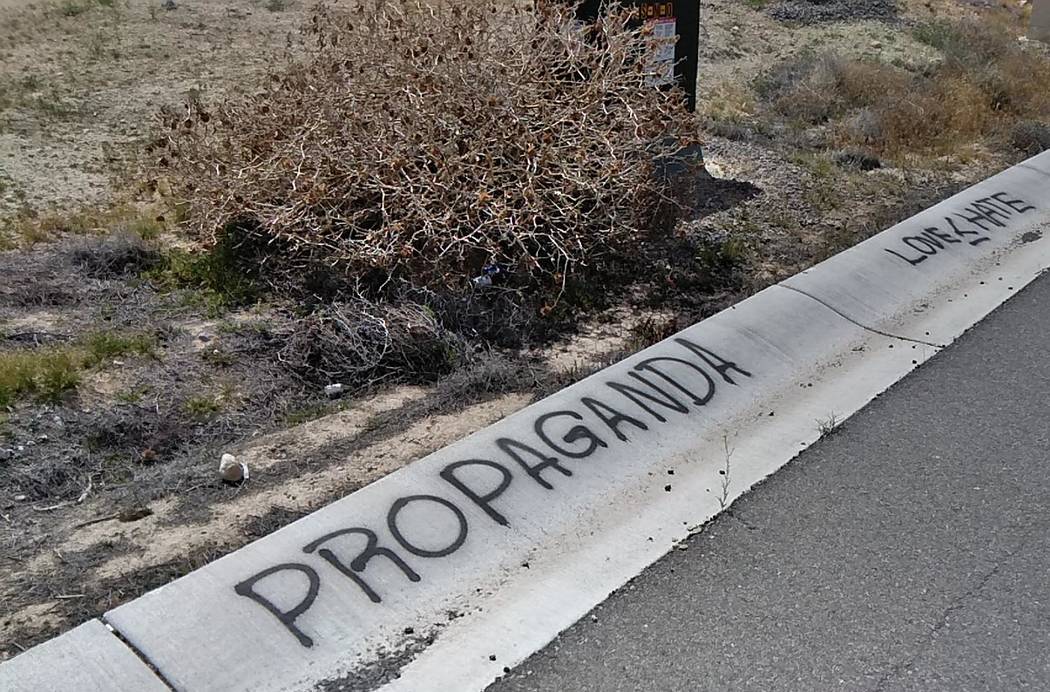 Selwyn Harris/Pahrump Valley Times Pahrump resident Ron Leu is not pleased with the recent graffiti scrawled along the street in the Ishani Ridge subdivision. Leu is also the owner of several unoccupied lots in the area. 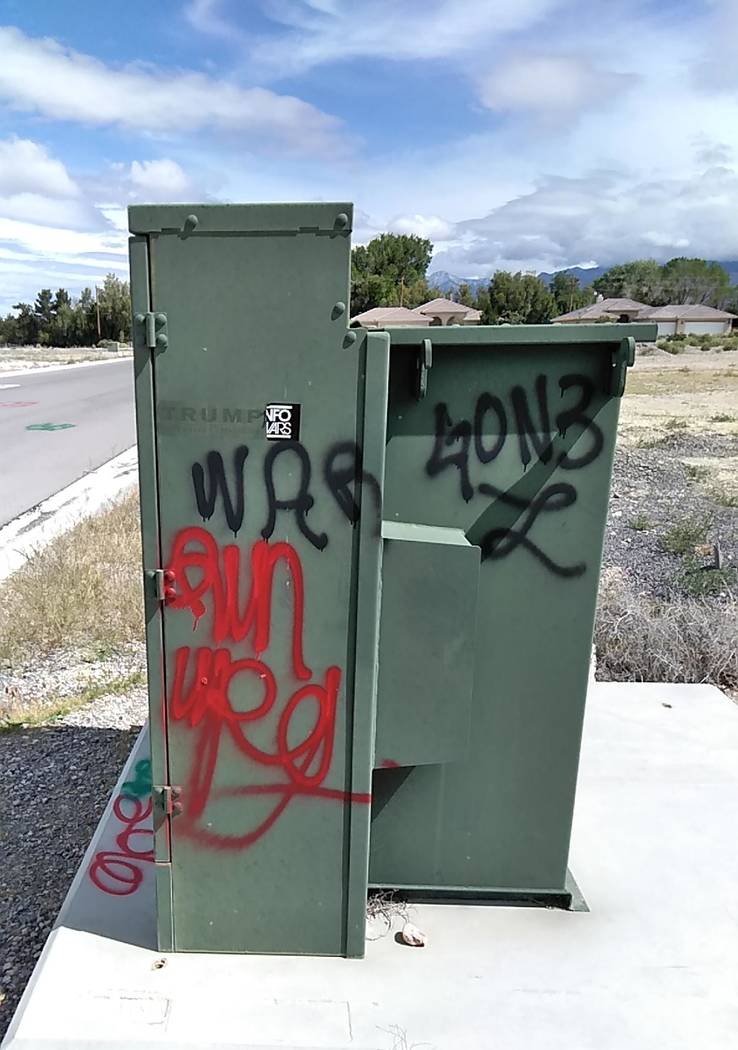 Selwyn Harris/Pahrump Valley Times Leu said he’s also witnessed the aftermath of prostitution and heavy drug use in the subdivision. He believes some type of surveillance system could possibly help to catch the culprits.

The quiet subdivision of Ishani Ridge off of Wilson Road has seen its share of problems over the years in terms of development, progress and infrastructure.

At present, another problematic issue has arisen, in the form of vandalism, or more to the point, graffiti.

Ron Leu has been a Pahrump resident for more than 10 years.

Leu, who lives literally a stone’s throw away from Ishani Ridge, owns 12 undeveloped lots in the neighborhood.

Just recently, Leu discovered graffiti scrawled along the pavement and curbs as well as a utility box.

As a result, he has concerns about what appears to be signs of blight physical decay in and around the subdivision.

“It worries me because some of the graffiti that I saw was very disgusting,” he said. “I think it’s a symptom of a psychotic person because some of that stuff was very disturbing. I would think it would be in the best interest of everyone if this person is apprehended, to at least get him some mental health therapy.”

Though Leu has yet to contact local law enforcement, he did manage to get a description of what he believes is the vehicle of the suspect.

“It was a gray-colored minivan,” he recalled. “I thought it was just kids drinking beer but then I realized it had to have been the graffiti guy. I didn’t go out there to challenge him because I’d rather have the sheriff’s office do that in case they are armed. I live right next to it, and I purchased the adjacent lots to keep people from building next to my house. I bought a bunch of the lots over there, and that’s why I have been keeping track of it more.”

Graffiti aside, Leu said there have been many other unsettling incidents that he’s also witnessed in the Ishani Ridge subdivision.

Reader beware, as Leu’s description is quite graphic.

“I can show you where somebody had diarrhea about a week ago,” he said. “The guy was on a motorcycle and he took off his pants and had diarrhea. He left all of his poopy clothing right there, so I figured he must have rode home naked. There was another guy who I thought was dead, so we kind of kicked his foot a little and he stirred around. He was just real stoned from the drugs. I’ve seen people stopping on the lots to defecate and urinate.”

Additionally, Leu said he’s also witnessed the aftermath of prostitution and heavy drug use in the subdivision.

“There have been drug addicts who left hypodermic needles on the ground,” he said. “I contacted the sheriff’s office about the hypodermic needles, and I gave them about four or five, but I must have thrown away around 50 of them. I picked them all up with tongs.

“The girl who was performing the acts of prostitution, I think is in jail, because that seemed to have stopped.”

After witnessing the alleged criminal acts over the years, Leu believes he may have a possible solution, at least in regard to the graffiti.

At present, only 10 occupied homes exist in the Ishani Ridge subdivision.

He believes some type of surveillance system could possibly help to catch the culprit.

“If we could set up a hidden camera somehow, it would be great if we can catch this vandal,” he said. “I’m thinking of calling the sheriff’s office in the next few days. They were increasing their patrols over here for a while, which is one of the reasons some of the crime dropped. They were coming around at nighttime catching some of these people. It’s also apparent that the entire subdivision needs to have controlled access. A gated community model is the only model that will work to limit the liability issues, limit the cut-through traffic issues and limit the criminal activities that have been occurring in this area.”