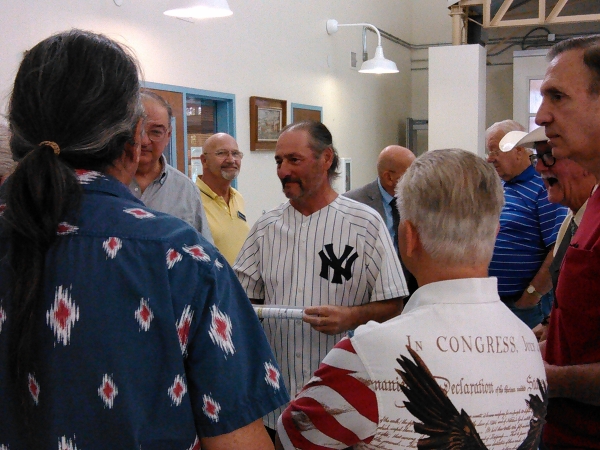 Resident Anthony Greco was sentenced to probation on Monday for felony insurance fraud connected to a house fire last year.

Fifth District Court Judge Robert Lane handed down probation instead of sending Greco to prison for 19 to 48 months. Lane explained Nye County Parole and Probation could not justify the length of the recommended prison sentence.

Greco was convicted of insurance fraud, a class D felony, in May. He was acquitted of felony arson and aiding and abetting charges during that trial.

Following the hearing, Greco said he will appeal his conviction.

“I am going to appeal this conviction because I don’t want a felony on my record and I’ve never been convicted of anything in my life,” he said. “I have lost my right to vote, which is very important to me because I’m 59 years old and I’ve been voting every year since I was 18.”

Greco said he was expecting to go to prison.

“I am really surprised by Judge Lane when he overturned parole and probation’s recommendation for prison because he usually makes it worse than what they do,” he said. “Maybe he was actually listening to what was going on. I wasn’t afraid of going to jail.”

“I think it was the right decision,” he said. “When you have no criminal history and it’s a non-violent property crime, I think generally that will be a probation case and that’s what the judge decided.”

The Las Vegas-based Printy also spoke about the county parole and probation department’s decision to push for the maximum sentence.

“I’m kind of stunned that they got up and admitted that their recommendation was based on stuff that they didn’t even put in the pre-sentencing investigation report,” he said. “I have never heard of that, so I don’t know if that swayed the judge where he felt maybe my client should not be given prison time because of parole and probations actions.”

Deputy Attorney General Michael Kovac, who prosecuted the case for Nye County, said pretty much expected Lane to rule in favor of the defense.

“Greco had no discernible criminal history and as far as Judge Lane’s decision, what he explained was correct,” he said. “You can suspect certain things but if there’s no proof of certain things, it goes nowhere. Judge Lane can only go by what the conviction was, what his record was, and his decision was good reason to make that ruling.”

Prior to the ruling, Lane said his instinct suggested that Greco did in fact commit the crimes of arson and insurance fraud.

“It appeared to me there was substantial proof that was presented at the trial regarding the arson,” he said. “Nonetheless, he was acquitted by the jury for the arson charge. My gut tells me the recommendation is the right one made for the shenanigans Mr. Greco pulls all the time. I have to do what’s fair, as I would for any other person based on his criminal history and the conviction he received in this case. I am going to sentence him to 19-to-48 months suspended for five years, with all the standard fines and fees.”

Still, Greco remained defiant in terms of his self-proclaimed innocence.

“I know I didn’t do anything wrong,” Greco said following the hearing. “When parole and probation recommended no parole and the maximum sentence I was saying to my lawyer I don’t understand why.”

Additionally, Greco displayed sympathy for his onetime co-defendant who broke ranks and testified on behalf of the state.

Kathy Rinaldi decided to plead guilty to conspiracy to commit a breach of peace, a gross misdemeanor.

As part of the terms of the plea agreement, Rinaldi received a 364-day suspended jail sentence, while agreeing to cooperate in the prosecution of Greco.

She was also ordered to pay the attorney general’s office $500 for prosecutorial costs as well as pay more than $14,000 in restitution to the Allstate Insurance Company.

“I truly feel sorry for Ms. Rinaldi because she was railroaded in all of this,” he said. “Nobody has realized that she is the victim here because her house was broken into and set on fire by vandals which is arson and she lost her home. Kathy Rinaldi did not get justice because she is still a victim.”

As a parting shot, Printy said he was astonished by parole and probation’s actions in relation to the pre-sentencing investigation report on the case.

Additionally, Greco was ordered to pay $5,000 in attorney’s fees, while he and Rinaldi will pay more than $15,000 in restitution costs to the insurance company.

Both were originally charged in Aug. 2010 after an investigation into a suspicious fire at their 5920 Pahrump Valley Blvd. home in what authorities say was a plan to collect money on the insurance policy.

Prosecutors claim the defendants would have collected roughly $20,000 after the home was paid off by insurers, according to court records.

Rinaldi is his former girlfriend.