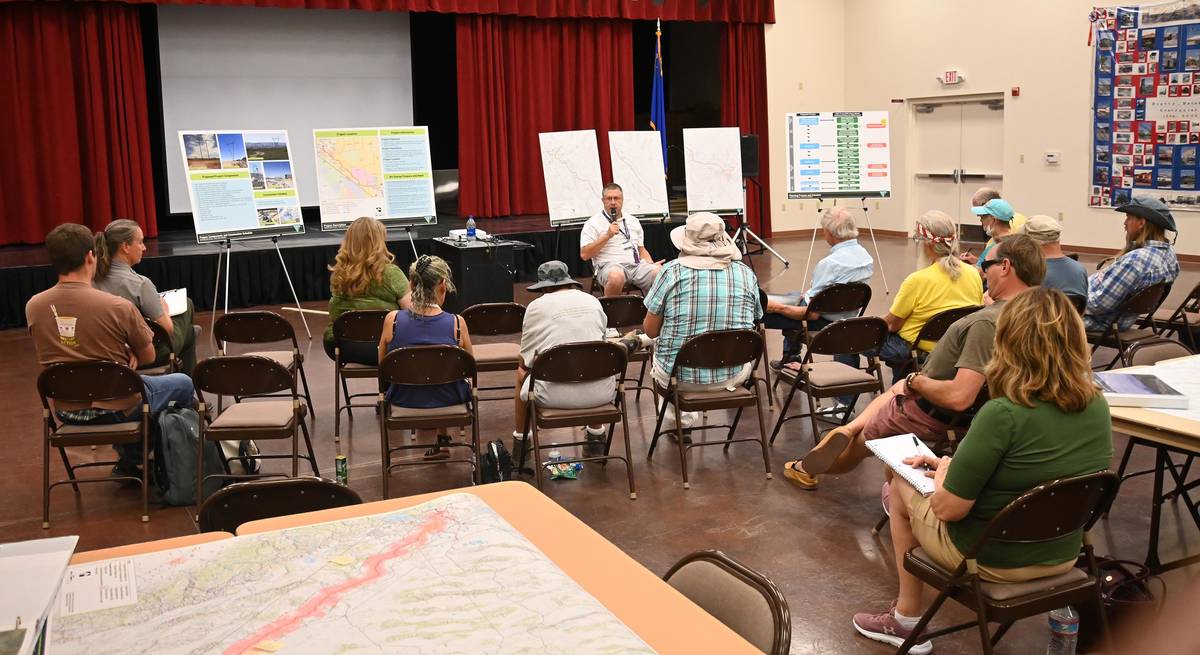 Richard Stephens/Special to the Pahrump Valley Times Greg Helseth answers questions in the first workshop on the Greenlink West Project in Beatty. The map in the background displays the route, with a wide pink area marking the visual impact--from where the powerline might be visible.

Richard Stephens/Special to the Pahrump Valley Times Greg Helseth answers questions in the first workshop on the Greenlink West Project in Beatty. The map in the background displays the route, with a wide pink area marking the visual impact--from where the powerline might be visible.

“If you build it, they will come,” is a familiar line from the movie “Field of Dreams.” That promise is proving true for NV Energy’s proposed Greenlink West Project.

Greenlink West involves the building of a system of high-capacity transmission lines, with accompanying substations, and other related components, including a substation near Big Dune in Amargosa Valley, to carry electricity from solar and other power-generating sources to northern and southern Nevada. The proposed transmission line extends 354 miles from northeast of Las Vegas near I-15 all the way to Reno.

The possibility of this infrastructure being built has already attracted several applications for solar projects, including two near Beatty—one extending from just south of Beatty near Highway 95 over to and across Highway 374 toward Death Valley, and the other in the Sawtooth Peak area.

A number of residents of Beatty and the surrounding area turned out at the Beatty Community Center Tuesday, June 22, for a pair of public workshops on the project.

They expressed a variety of concerns, including possible effects on wildlife and vegetation, water usage, aesthetics, and human health.

Bureau of Land Management project manager Greg Helseth, who conducted the two-session workshop, listened to and addressed their concerns in question-and-answer sessions following a brief presentation outlining the project.

One concern voiced by Beatty Town Advisory Board Treasurer Erika Gerling was the possible impact of the power lines on mountain bike and off-highway vehicle trails.

She said that the economic impact of mining was temporary and that “Beatty is building its economic future on recreation.”

Helseth said that he personally enjoys off-roading, and that he loves to find a power line road to follow.

NV Energy says that the project “improves access to the most economically viable renewable energy zones and provides a reliable statewide transmission grid system by which renewable energy industries can set up and have market access in Nevada.”

Hilseth said the project would also be an improvement to what he characterized as Nevada’s “old, antiquated” power grid.

Hilseth said that, so far, the solar energy project proposals in the Beatty area “are at the bottom of the pile,” and that they may or may not be approved.

This series of public workshops, including the one in Beatty, are not part of an environmental impact study, something that will come later.

If approved, NV Energy’s goal is to have the Greenlink Project in service by December of 2026. This would have construction starting in 2023.