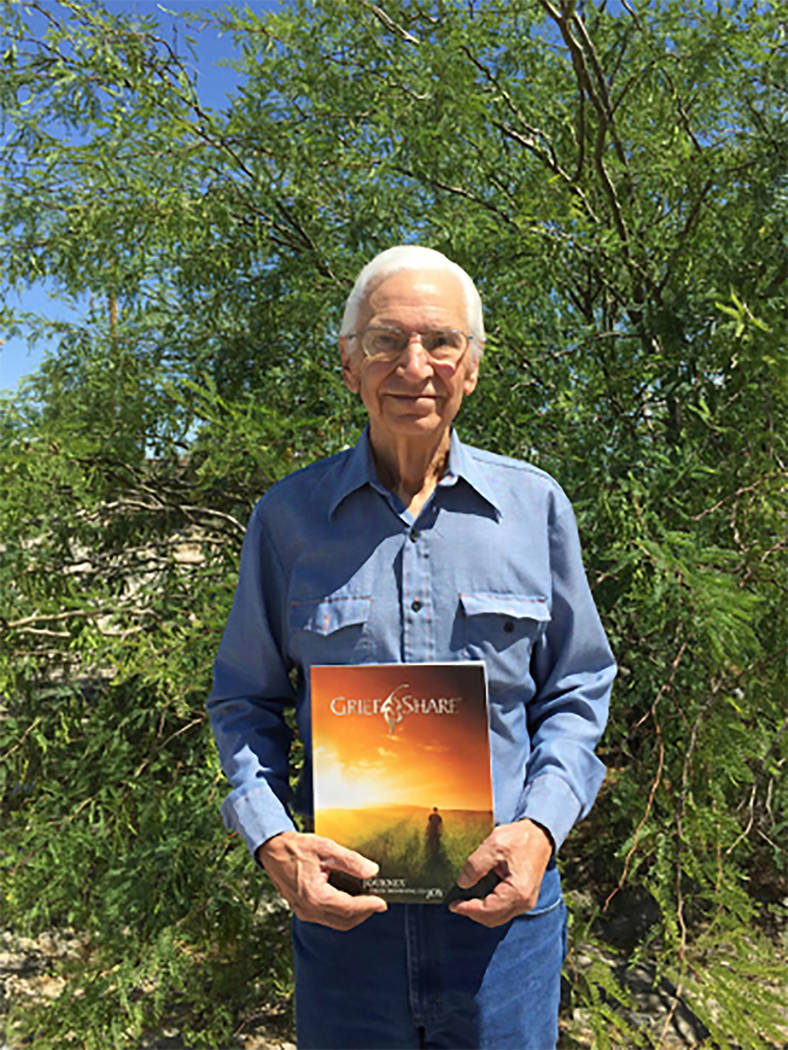 It was the day that Giordano’s wife of more than 55 years, Anne, passed away.

“My wife had COPD and she was on oxygen 24/7, but that was not the cause,” he recalled. “She had an aneurysm that she was diagnosed with. Doctors did repairs on it, but two years later she and I were in bed and we told each other we loved each other. All of a sudden I heard her moan when the aneurysm ruptured. The next day she had passed away.”

As a result of his loss Giordano stayed with his daughter, who suggested he seek grief counseling.

Not long afterward, Giordano learned of a support group known as “GriefShare.”

He noted the group helped him to recover from his loss and move on without his wife.

“The Pahrump GriefShare group started July 11, 2015,” he said. “The meetings are held on Saturdays from 1-to-3 p.m. at Central Valley Baptist Church on Blagg Road. It doesn’t matter which religion you subscribe to because if you lost a loved one, you are welcomed to join. It runs three times a year with 13-week cycles. When I finished, I saw the good that it did me, and other people there. We are going to start again on August first.”

Giordano said each member of the GriefShare support group has lost a loved one.

He noted the meetings consist of three different components.

“There is a video that we show which averages about 35 minutes and it’s about people who have lost loved ones as well as grief counselors who have all lost someone,” he said. “The second component is a group discussion of the video and how it relates to them, as well as how it may be helping them realize that they are not the only ones that are suffering a loss. The third component is a workbook which is very important. They will take the workbook home with them and create a journal while watching the video.”

Additionally, Giordano said GriefShare has a special session during the holidays each year.

“Just before Thanksgiving and Christmas, we have a session that’s called ‘Surviving the Holidays,’” he said.

“It’s about facing the holidays after losing a loved one for the first couple of years. My first Christmas without my wife, I didn’t even put up a Christmas tree, which was the first time since I was a baby there was no Christmas tree in the house. I had no decorations whatsoever.”

Giordano also said GriefShare has actually changed the way he feels about the holidays.

“The second year, after being involved with GriefShare and attending the meetings every week, it helped me to realize that Christmas is not about my wife, because it’s about Jesus Christ,” he said. “The second year I put up a tree and decorations and celebrated Jesus. I gave my wife’s picture a kiss and told her Merry Christmas. I think about my wife every day. It gets easier, but time does not heal all wounds. We were married for more than 55 years.”

Giordano noted that GriefShare has existed for more than a dozen years worldwide.

He said he was shocked to learn that Pahrump did not have a chapter.

“We are a community of 37-to-38,000 people and there’s nothing here to help them when they lose a loved one,” he exclaimed. “If we can help one person, I would consider that a success. So far, we have helped nearly 40 people get on with their lives so far, right here in Pahrump. I can relate to those who have lost loved ones because they are going through the same thing that I went through.”

Giordano did mention there are a few rules to adhere to during the series of GriefShare meetings.

“We don’t want people to come just to be looking for a date,” he said. “The most important one is, confidentiality, because what is said in that room, stays in that room, so there are certain guidelines to be maintained. The registration fee is $15 for a lifetime association, but if they can’t afford the $15, we will take care of it for them.”

Following the series of GriefShare meetings, Giordano said a special event is held.

“On week 14 we have a potluck dinner as well as a sing-along where I bring my guitar,” he said. “We sing some songs for them, and I get people to join in and sing. We also have a bunch of helium balloons where members write notes to their loved ones and we go outside where the pastor says a prayer and we release the balloons to the heavens. It’s very poignant.”

“It was terrible,” he recalled. “It’s probably the worst thing in the world to lose a wife, a husband or a child. There was nothing like this available back then.”