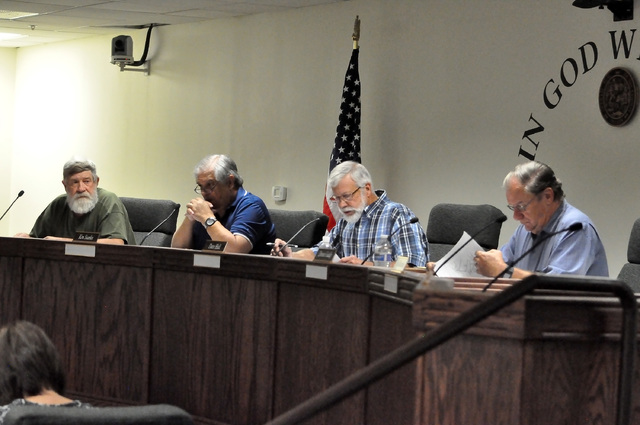 The county water board continues to go through the Ground Water Management Plan even though parts of it have already been forwarded to State Engineer Jason King.

During the lengthy discussion, members of the Nye County Water District Governing Board talked about how to better implements parts of that plan.

“Essentially, we are through the largest part of the (Ground Water Management Plan) except for some items that in my humble opinion, were sent to the state engineer out of context, and I want to talk about those,” board interim general manager Oz Wichman said.

One of the recommendations forwarded to King by the Nye County Commission was requiring meters on new domestic wells and limiting them to a half-acre foot annually. The suggestion is based on the notion that the basin water resources cannot support the drilling of domestic wells, Wichman said.

The Legislative Commission’s Subcommittee to Study Water in August agreed to allow King to limit withdrawals for new domestic wells.

“We will have to wait and see what the legislative subcommittee puts up as proposed change,” board member Ken Searles said. “Depending on what comes out of that proposal, we may want to make some very serious inroads to get any language we do not approve changed.”

Additionally, board members decided to continue educating new well owners on the use of supplemental water rights, another item that had been sent to King.

“Before we embark on a costly public outreach component as part of the groundwater management plan, we need to have some more facts and figures presented to us in an understandable manner,” Wichman said. “So, probably the reality of this item is it would be a next year discussion.”

An aquifer storage and recovery project, with redistribution of pumping; and preparation of a utility backbone infrastructure plan with the Public Utilities Commission of Nevada were included in the Professional Engineering Report.

“The place to start is to include it in the (report) subjects, capture the bang for the buck, capture some of the subtleties of dealing with PUC and utilities regulated by the PUC and frame the discussion in context with bang for the buck,” Wichman said about the infrastructure plan.

Board members also discussed several items from the management plan that Nye County commissioners had taken no action on. Among them were groundwater modeling, growth control and water importation.

They said that they will monitor groundwater modeling through the Central Nevada Water Authority and other venues to see what other steps legislature will propose, and then act accordingly.

“I don’t know at this point in time if this board should do anything except monitor what the state Legislature is proposing to do with the help of Central Nevada Regional Water Authority and then take steps as pre-emptive as possible, meaning as soon as we find out what they are leaning towards, make our desires and our wishes are known prior to the legislation actually being passed,” Searles said.

Water importation to Pahrump was held until more information is available.

“I would have to say on the information that I have at this time, if you want to grow this community north of 80,000 to a 100,000 people, maybe a little bit more, you are going to have to import water and it’s got a big price tag,” Wichman said.

“If this board wants to pursue this as an option, you need to budget up and you need to start today because it is a journey literally of 1,000 miles,” he said.

They also discussed growth control and directed staff to pursue the item as outlined.

“Basically, all that the groundwater committee asserted was that the Pahrump master plan has already a little under these items relating to water that needs to be written in a county code, and that those need to be pursued, because the current version of the Pahrump master plan if you implement all of the policies, you are talking population of 130,000 people,” he said.