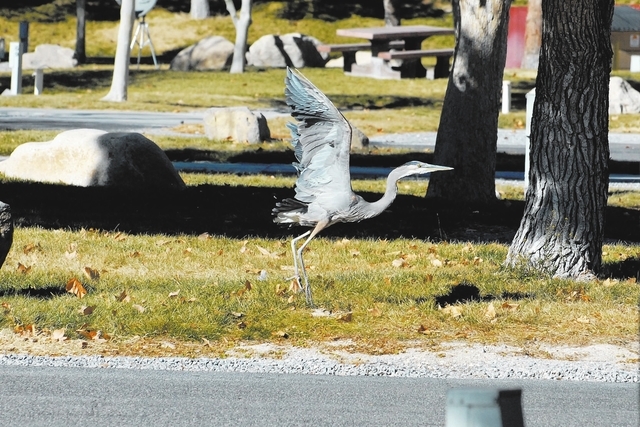 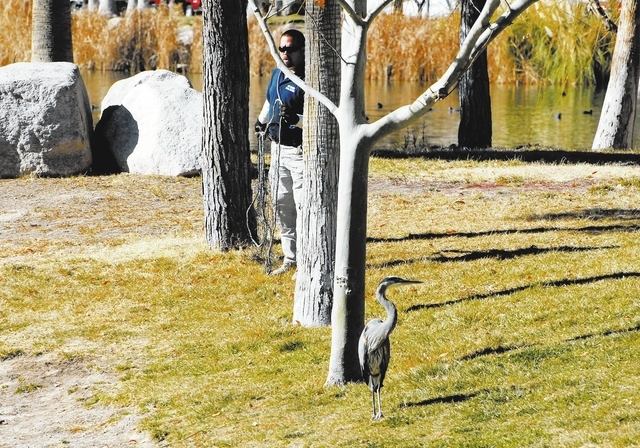 The old saying, “a bird in the hand is better than two in the bush” certainly applied to members of the local Red Rock Audubon Society group Wednesday morning.

As volunteers looked in vain on attempts by Nye County Animal Control to capture a wounded great blue heron at Lakeside Casino RV Park, a local member released a burrowing owl that had been nursed back to health.

The great blue heron had been spotted at the Lakeside Casino artificial lake by vacationers over the past few years.

“We got a report of him here with a broken wing about a year ago,” Audubon Society member Richard Cantino said. “He’s able to get along, able to fend for himself, to capture him would be detrimental.”

But that changed recently.

“A couple weeks ago we got a call from Lakeside the great blue heron was in dire straits. He’s got string tied around his foot,” Cantino said. “We got a hold of a bird rehabilitator in Vegas, the consensus was we try to capture him.”

The volunteers tried to help corner the bird, but as the animal control officer sneaked up on the heron from behind a tree next to the lake, the bird got wind of the scheme and flew across the RV park toward Homestead Road. Animal control attempted to pursue the bird, but eventually gave up the fight. Richard Cantino said the bird can fly and walk short distances.

Volunteers were issued goggles to cover their face if they caught the heron, as Carol Cantino warned the bird will go for their eyes. Richard Cantino tried to help, renting a paddle boat to try to corner the bird from the water.

Audubon Society members said the great blue heron doesn’t just eat fish — the lake is stocked with fish — but likes to fly to nearby farm fields to hunt moles, or dine on gophers at Mountain Falls Golf Course.

Charlie Eyster, a vacationer at the RV park from northern California, said he walked within five feet of the heron the other day while walking his dog. Eyster said he was unaware the bird was even there and didn’t know why volunteers couldn’t catch him.

Johnson said he and his wife didn’t see the bird this year and didn’t know it was still here.

He’d prefer the heron stay at Lakeside. “It’d be nice because it’s a beautiful addition.”

Johnson said while he hasn’t fished at the lake himself, he sees others with poles in the water.

Speculation was the great blue heron was startled by the group of volunteers assembled, or perhaps even recognized the net from previous attempts at capture by animal control. There was a suggestion volunteers try to set a trap next time, feeding the bird some fish.

The great blue heron is not on the endangered species list but is protected as native wildlife in Nevada.

Animal control officers gave up after more than an hour of staking out the bird.

Richard Cantino did have one sure bet — he released a burrowing owl that was reported wounded about four months ago that was nursed back to health by a Las Vegas bird rehabilitator, who would also help with the great blue heron.

“Somebody driving down Homestead Road saw something fluttering, stopped and it was a burrowing owl,” he said.

Animal control contacted Cantino, who took the bird to a Las Vegas veterinarian. After some tender loving care, the owl was released from a box near other burrows and quickly flew under the shade of a nearby mesquite tree in the middle of a large field.

Under the Bird of Prey Act, the burrowing owl is listed as a bird of concern by the U.S. Fish and Wildlife Service. Cantino said the owls like open areas where they can spot predators.