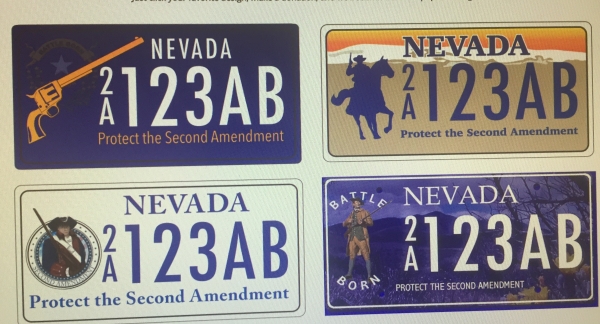 Founded in 2011, the Nevada Firearms Coalition is dedicated to the ownership and safe use of firearms for self-defense, competition, recreation and hunting.

The coalition was created after the Nevada State Rifle Association went defunct in 2007.

This month, the group began a campaign for the creation of a commemorative license plate in support of the nation’s second amendment.

Coalition President Don Turner said the group introduced a contest where Nevadans can vote for one of four license plate designs which will eventually accompany the more than 30 specialty license plates presently offered by the Department of Motor Vehicles.

The contest is known as “Drive the Second Amendment.”

Turner also noted that the popularity of a particular speciality license plate in Nevada determines whether the DMV will continue to offer them.

“The way the law works, there are about 36 specialty license plates and you have to wait until one of them falls off the list,” he said. “Some of their sales go down over a period of time.”

Turner said the contest came about after a Nevada lawmaker created the initial design for the first Second Amendment license plate.

The coalition’s efforts have since gained support among a majority of legislators in Carson City.

“They passed the law and they decided they would use the revenue from the plates to go to the Nevada Firearms Coalition and we are going to use it for firearms safety and education training programs,” he said. “We met with him and told him that it would be much more fun if we had a contest where the public could choose the plate they wanted. We now have 4 different plates.”

In order to make the license plate available, Turner said the coalition must raise $5,000.

Supporters of the effort can vote for their favorite design by logging on to the coalition’s website and click which plate best represents the Silver State.

At the same time, they are urged to donate to the cause.

Turner noted the coalition has nearly reached its goal after the drive began on Dec. 17, as close to 50 percent of the total was reached on Wednesday.

“People can vote for their favorite license plate design by contributing and we’ll submit the most popular design to the Department of Motor Vehicles,” he said. “We need to raise $5,000 to make the second amendment plate available. Whether they can afford to donate $5 or $500, they can make this happen.”

Turner said the coalition was fortunate to have the backing of lawmakers for their latest effort.

“We were very fortunate this year by having a couple of senators put together some of our bills for us and push them forward,” he said. “We were able to repeal the mandatory handgun registration in Clark County. “We also wanted one gun law for all of Nevada. The way the laws were written, if you were in any Nevada county but Clark County, you have one set of gun laws and in Clark County there were seven sets of gun laws, depending on which town you drove into. Now we have one law throughout the entire state.”

Additionally, Turner said he and coalition members are concerned about their respective rights as gun owners.

“So much of our rights are being attacked because of this trend toward socialism in our country,” he said. “People are concerned about their rights and the Constitution and they really need to register to vote. The time is over for people to just sit on the sidelines and be an observer. We have a real nice web page and we are very involved in politics. We also have a Political Action Committee.”

To view and vote on the specialty license plates, log on to www.nvfac.org.

“Just go to the license plate section and click on the plate that you think is the best,” Turner said. “You can vote more than once. You can vote a million times if you want to.”