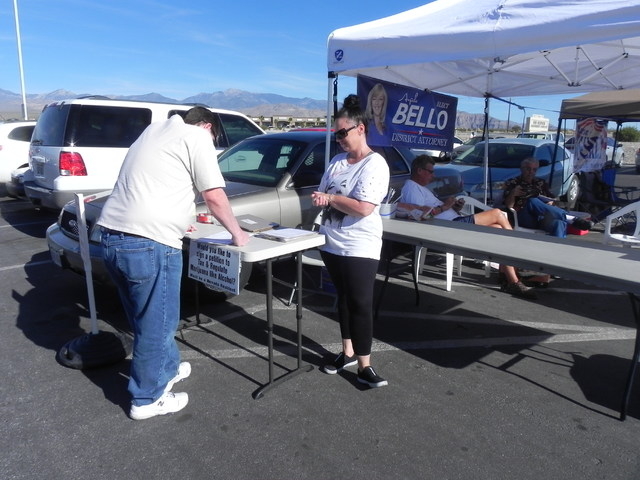 LAS VEGAS — Proponents of expanding gun background checks in Nevada said Tuesday they have more than twice the number of signatures needed to put the issue on the 2016 ballot.

Nevadans for Background Checks collected about 250,000 signatures, according to Kayla Keller, a spokeswoman for the group. It currently takes 101,667 signatures from registered Nevada voters to qualify an initiative for the ballot.

The deadline is Wednesday to submit signatures to county clerks across the state.

Polls show that more than eight out of 10 Nevadans support expanding gun background checks to private sales, including at gun shows, according to gun control advocates. Now, such checks are required only by licensed gun dealers to prevent felons, the court adjudicated mentally ill and domestic abusers from legally buying guns.

Six states — California, Colorado, Connecticut, Delaware, New York, Rhode Island — plus Washington, D.C., require universal background checks for all sales and transfers of firearms, according to the National Conference of State Legislatures. Washington state will soon do so following last week’s passage of a voter initiative.

Other states have varying laws on expansion beyond what federal law requires, including Oregon, which requires a background check for purchases at gun shows.

In 2013, GOP Gov. Brian Sandoval vetoed a bill that would have expanded background checks to private sales here. The state senator who sponsored the measure, Sen. Justin Jones, D-Las Vegas, was defeated in the Nov. 4 election as Republicans gained majority control of both the Senate and the Assembly. That makes it highly unlikely that the Nevada Legislature in 2015 would approve any gun control bills.

“Clearly, Nevadans want their elected leaders to require background checks on all gun sales,” she said. “But if they refuse to act, the people of Nevada will have a chance to take matters into their own hands by voting for the Background Check Initiative in 2016.”

Backers of an initiative petition to legalize the recreational use of marijuana in Nevada said last week they had collected far more than the required number of signatures to bring the measure to the ballot in 2016 as well.

The Coalition to Regulate Marijuana Like Alcohol plans to turn in about 170,000 signatures to county clerks on Wednesday.

If the signatures are legitimate, the initiatives would first go to the Legislature, which has 40 days to act on such measures. If lawmakers pass it and the governor signs, it becomes law. If the Legislature does nothing or if the governor doesn’t sign it, an initiative goes on the ballot.

If lawmakers amend the measure, both the original version and the amended measure would go on the ballot. If both pass with more than 50 percent of the vote, the one with the larger number of “yes” votes becomes law.