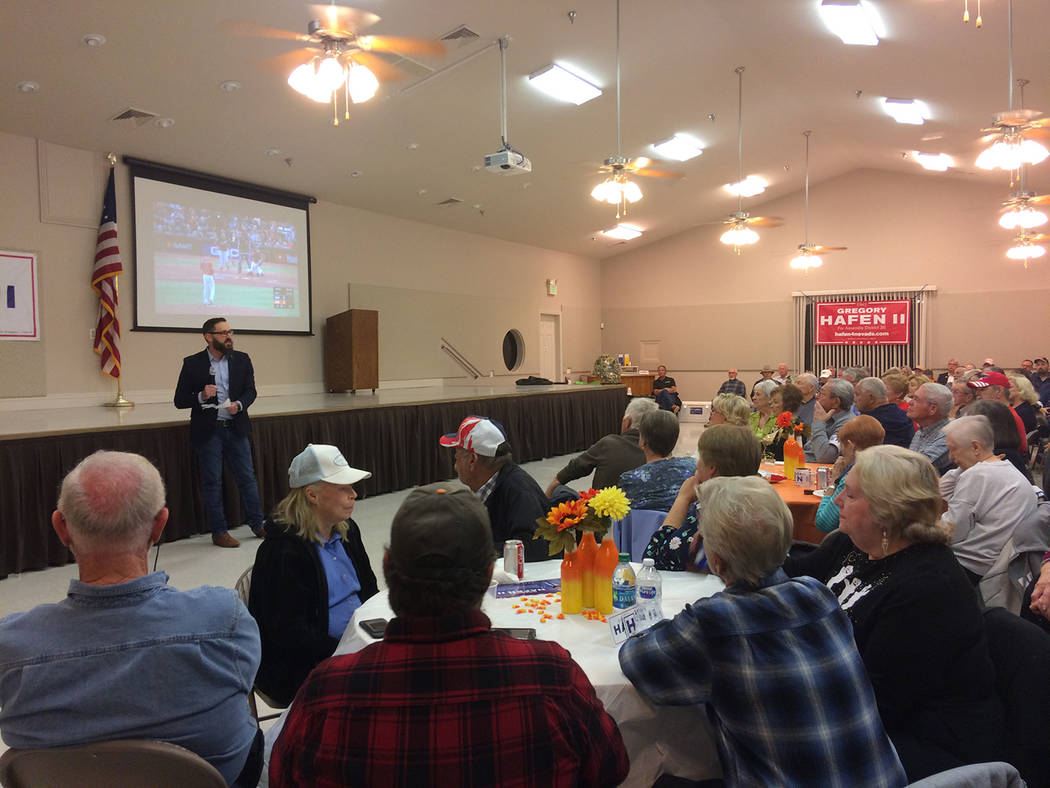 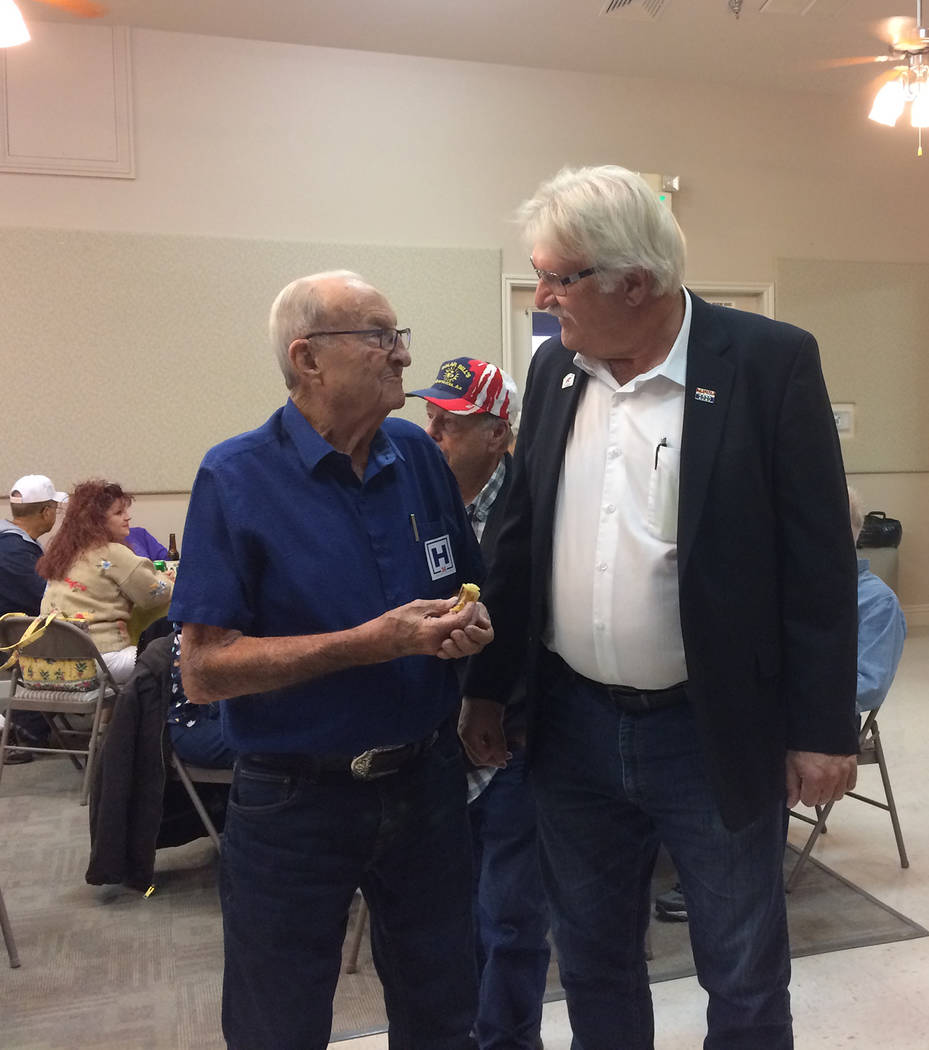 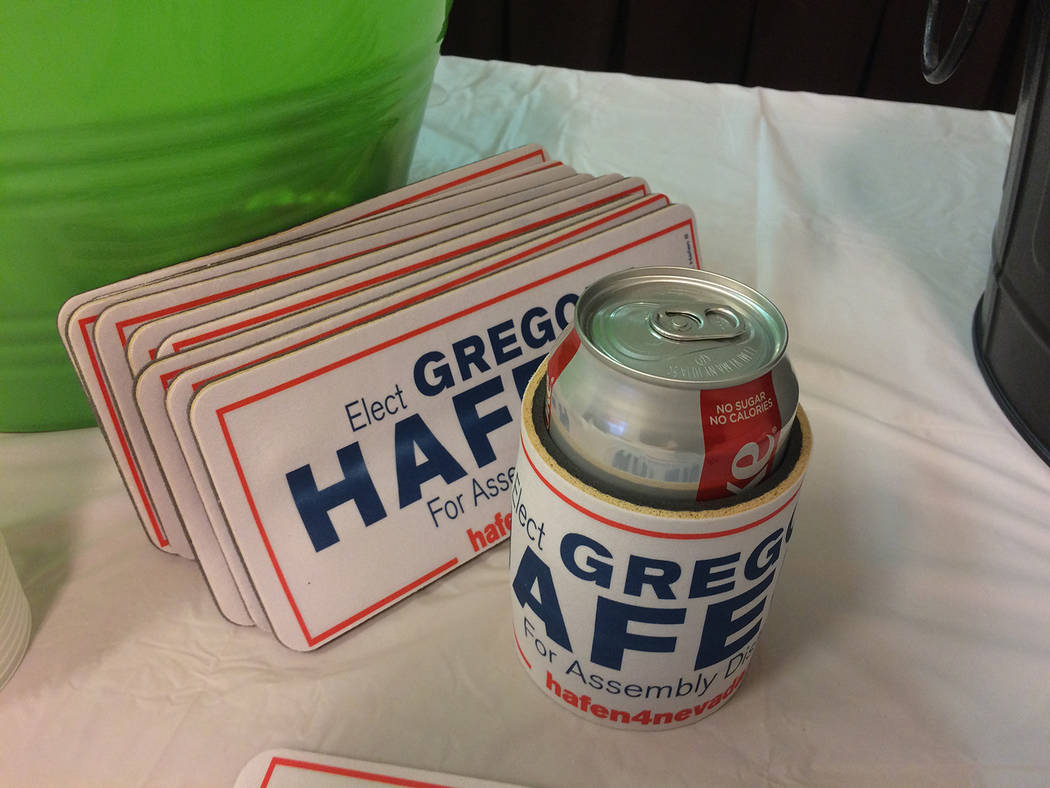 Robin Hebrock/Pahrump Valley Times Mementos such as these cold can wraps were available for attendees to take home following the campaign kickoff event held by Greg Hafen II, who is currently the appointed Assemblyman for Nevada District 36 and is seeking election to that seat in 2020.

The 2020 election may still be many months away but many candidates across the Silver State are wasting no time in launching their campaigns and connecting with the voters who will ultimately decide their fate next year.

One such candidate is Greg Hafen II, who currently serves as the appointed Nevada District 36 assemblyman, and who is seeking his first official election to a political office in 2020. Thus far, Hafen II only has one challenger, fellow Republican Dr. Joseph Bradley, who made an attempt for the District 36 seat in 2018 and is now taking another shot at the office.

Hafen held his Campaign Kickoff Fundraiser on Wednesday, Oct. 30 at the Artesia Community Clubhouse, in the heart of the Artesia at Hafen Ranch housing development built by his family. A large crowd of Hafen’s friends, family and supporters turned out for the event, which began in patriotic style with the “Star-Spangled Banner” followed by the Pledge of Allegiance.

Hafen’s grandfather Tim then had the honor of introducing his grandson, giving the audience an overview of Hafen’s background, including the fact that he is a fifth-generation Nevadan. Tim detailed that Hafen has been in the Pahrump community for many years and has been heavily involved in the community, at one time holding a position on the local hospital board and a seat on the Pahrump Regional Planning Commission. Today, Hafen is the general manager of his family’s water and sewer service business, Pahrump Utility Company.

Tim then touched on Hafen’s appointment to the very same seat the Tim himself once held, an appointment made by the Nye, Clark and Lincoln County commissions following the posthumous election of Dennis Hof.

“There were 19 applicants and I think it speaks well of Gregory to be that appointee,” Tim told the crowd.

Before moving into his speech that evening, Hafen took a moment to offer an expression of gratitude for President Donald Trump and the U.S. troops who successfully eliminated the leader of ISIS, Abu Bakr al-Baghdadi, a point that drew rousing applause from all in attendance.

“It’s been an absolute honor to serve our community and to try to fight for what is best for our rural community here. It was a very difficult session, I was a rookie in the super minority, so things weren’t exactly easy,” Hafen said in opening.

He explained that while there were several “ugly” tax bills that moved forward in the 2019 Legislative Session, there was a silver lining in the fact that there is now litigation to fight those bills. Hafen noted that he felt “positively optimistic” that those bills would be overturned, as he felt certain they were unconstitutional.

Hafen also touched on the economy, expressing his worry that last year’s legislative session could put a damper on the boom Nevada has been experiencing. On education, Hafen stated that he believes that Nevada has the ability to rise up in the national education rankings by modeling its system in a style similar to what Florida instituted and which resulted in Florida’s own rise in those rankings.

Health care was another topic that Hafen spoke about, honing in on what he and other lawmakers hailed as a huge triumph in the 2019 legislative session, a bill that was sponsored by Assemblywoman Melissa Hardy and co-sponsored by Hafen. That bill, he detailed, removed the “gag order” that barred pharmacists from telling consumers about cheaper, generic versions of prescription drugs.

“Now you have more knowledge when you go to the pharmacist,” Hafen said. “And I think that is a huge step because more money in your pocket trickles around the community and stays here locally…. Thank you Assemblywoman Hardy.”

Hafen also touted his credentials, highlighting his selection by the Nevada Policy Research Institute and American Conservative Union Foundation as one of the top five conservatives in the entire state, as well as his selection as chair for the rural Nevada Trump re-election campaign. “It means a lot to be recognized for the hard work that you do and standing up for what’s right in our community.”

In conclusion, Hafen encouraged unity within the Republican Party, stating, “We’ve spent too long fighting and bickering amongst ourselves and its time that we all circle around each other and realize that we are neighbors, we’re friends, we’re family. We need to stop the bickering and the in-fighting and move this country and this state forward.”

For more information on Hafen’s bid for office visit www.hafen4nevada.com