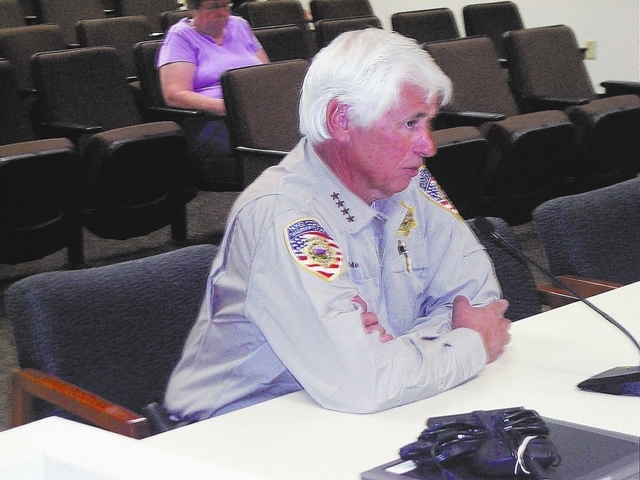 TONOPAH — Nye County commissioners Tuesday voted 3-2 to increase the sales tax one-half percent from 7.1 percent to 7.6 percent, though commission Chairman Butch Borasky said he wants a future ballot question on the matter to let voters decide whether to allow the tax to end on Dec. 31, 2015.

It ends another chapter in the attempt to increase funding for the Nye County Sheriff’s Office and county fire departments that began with the passage of a ballot question by 18 votes in November 2006. But after the Nevada Legislature gave their consent in 2007, county commissioners voted it down by a 3-2 vote in December of that year. It was resurrected in August, but commissioners again rejected it by a 3-2 vote.

Commissioners Frank Carbone and Donna Cox voted against the measure in this latest round. But Borasky, who cast the third vote against it on Aug. 20, voted in favor of it this time. Unlike that last meeting, there were no comments opposing the sales tax increase from local GOP honchos, only pleas from government officials to support it.

“In the population of Pahrump and our needs we are very underfunded,” Pahrump Town Manager Susan Holecheck said.

Still, she was concerned about a clause in the bill allowing the funds approved by the Board of County Commissioners to be pooled to provide shared services.

“That statement gives me pause. I think that there might be a potential situation where the town’s allocation might be overridden if the county needs some pooling element that might be significant,” Holecheck said. “I hope we can work together to better understand the parameters when such a pooling element is appropriate since the people of Pahrump will be vast generators of this.”

Pahrump Valley Fire Chief Scott Lewis said since the original ballot question his department is responding to 4,500 to 5,000 calls annually, many are high risk, high hazard calls within the community that occur on a daily basis.

“This has truly become a need, not a want,” Lewis said. “Even though we are a very talented group of career professionals, our job of doing more with less has put us in a position of becoming much less effective than we have been,” the fire chief said.

Sheriff Tony DeMeo said, “our call volumes haven’t gone down even though the population has decreased.”

Statistics show the crime rate dropped to the lowest levels in years in 2011 due to new programs, but then rose 46 percent in 2012. Quoting one famous police chief, DeMeo said, “the best penicillin for crime is more cops on the street.”

“We believe the public comes first and our lives and our dedication is what brings us to these particular types of professions. I just hope you’ll look at the voters that passed this, wanted it,” the sheriff said.

Commissioner Lorinda Wichman made the motion to pass the ordinance, then agreed to amend her motion after Borasky asked for an advisory question on the 2014 ballot whether voters wanted the sales tax increase to expire at the end of 2015.

Wichman changed her mind after Cox spoke in favor of the sales tax increase, making a straight motion to pass the tax increase. “We can put something on the ballot any time we want to,” Wichman said.

Commissioner Dan Schinhofen said he would be happy to put it on the ballot again and said he wanted the sales tax to last for at least two years.

Cox said she wanted to increase the sales tax for six months and see how the economy fared.

“I understand the problem last time was there was no plan how this money would actually be spent. I see it’s going to be spent for certain things in the ordinance this time around,” Cox said. She asked what the county sales tax would be with the increase and also wanted assurances the money would be distributed back to Nye County and not distributed statewide.

“Every agency will have to submit a plan how they plan to spend that money and it has to be approved by you and all of us,” Borasky said.

Cox disagreed with another ballot question.

“You can’t very well ask them to base their budget on a sales tax that may be taken away from them in two years. That’s why I feel this is a bad time to even be doing this. But I wanted to make the statement if this is done, it has to be a permanent thing. If we intend to grow and we want to get more and more people we need more public safety,” Cox said, adding, “I’m in a quagmire doing this thing.”

“I feel there might be other ways and better ways of doing this. At this time I’m going to support it, not because the pressure is on, but because it’s such a little amount,” Cox said. Despite her hints at approval, Cox inexplicably voted against the increase.

“I don’t want to see our taxes so high we run people off and they might as well stay in California,” she said at the end of voting.

“I can’t imagine anyone leaving Nye County paying 7.6 percent taxes to go to Clark County where they pay 8.1 percent,” Wichman said. During the first vote in December 2007, Wichman was a government affairs representative for Round Mountain Gold Company which opposed the sales tax increase.

“I didn’t support this last time because I made a pledge to the people that I talked to as far as when I was out getting elected. I don’t change my positions. I said if we’re in a position where the economy isn’t doing very well I won’t raise taxes. I’ll stick with that argument,” Carbone said.

Schinhofen said that’s the reason he voted for it, because of a campaign promise. “I said I would support it if it was supported by a will of the people.”

Borasky asked the question be put on the ballot in November 2014 regardless of the vote outcome Tuesday.

Afterwards, Holecheck said the town’s plan would allow them to fill three firefighter positions and buy some equipment. But she criticized Borasky’s attempts to bring it back up for a vote next year, which could make it difficult to attract applicants.

“We can’t hire people and lay them off a year later. That wouldn’t be a wise budget move,” Holecheck told the Pahrump Valley Times. “If there’s rumors, there’s word this might be subject to recall by a vote of the people, it might make you leery to apply for a position.”

“Given the fact so many of our firefighters are doing transports to Las Vegas that leaves our town unprotected in my opinion,” she said.

DeMeo said afterwards he couldn’t say how many deputies he would be able to hire from the revenue generated by the sales tax increase, which would amount to $1.1 million to $1.2 million more for his department. He said it would depend on the plan approved by commissioners.

“You’re looking at a year before you can set a budget,” DeMeo said.

He ridiculed the concept of another election.

“Why doesn’t every elected official, whether they’re running for office or not in 2014 put their name on the ballot?” DeMeo told the PVT. “The people already voted. To put it back on the ballot, why?”

During a budget discussion at the meeting, DeMeo said he was “conned” after the county manager cut six positions during a reorganization of his department without his knowledge. He said the sheriff’s office was short 10 positions at the start of the fiscal year.

“I’m doing the job of a captain and a lieutenant in direct supervision, which is an anomaly unheard of in sheriff’s departments,” DeMeo said. “We’re at 13 percent of our budget. Then I find out that miraculously some county commissioners decided they’re going to reorganize the sheriff’s department without my permission.”

“I will not be so conned. I’m keeping my lawyer advised with everything you guys are doing with the budget. So if you have any problems come to me,” the sheriff said.

Assistant Sheriff Rick Marshall said deputies have been running up overtime transporting prisoners for medical appointments in Las Vegas, a one and a half hour to two-hour drive each way. They try to use reserve deputies or lower paid deputies first, he said, with an option for using comp time or getting paid overtime.