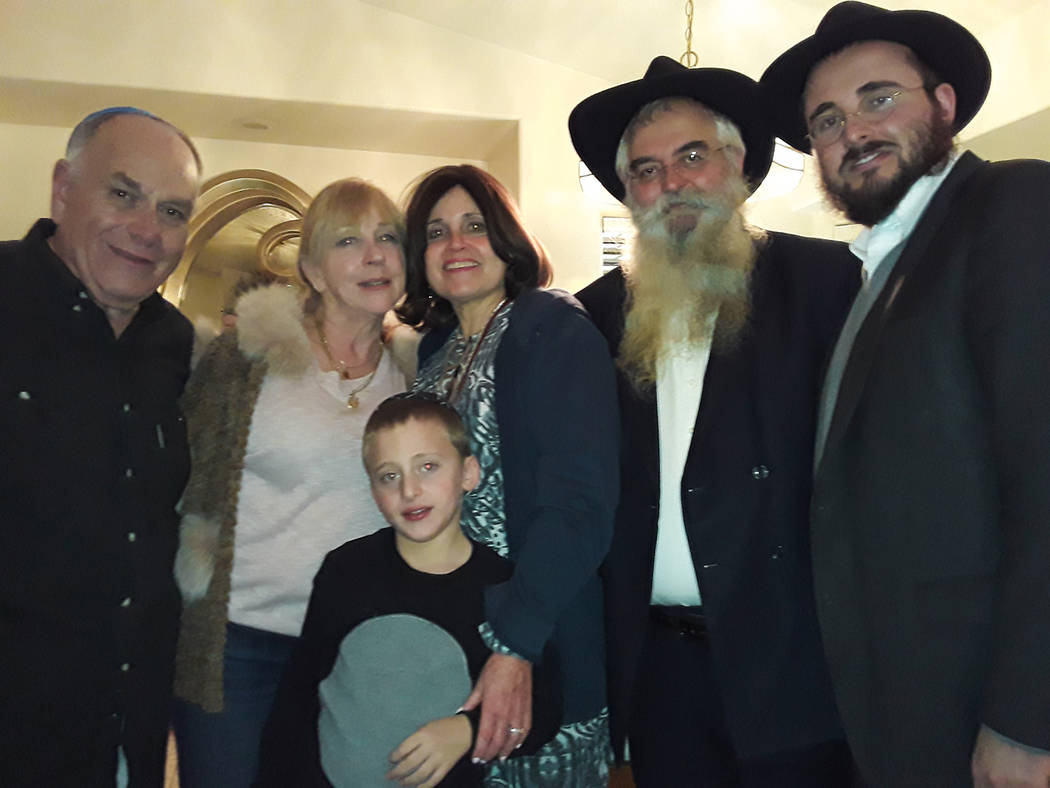 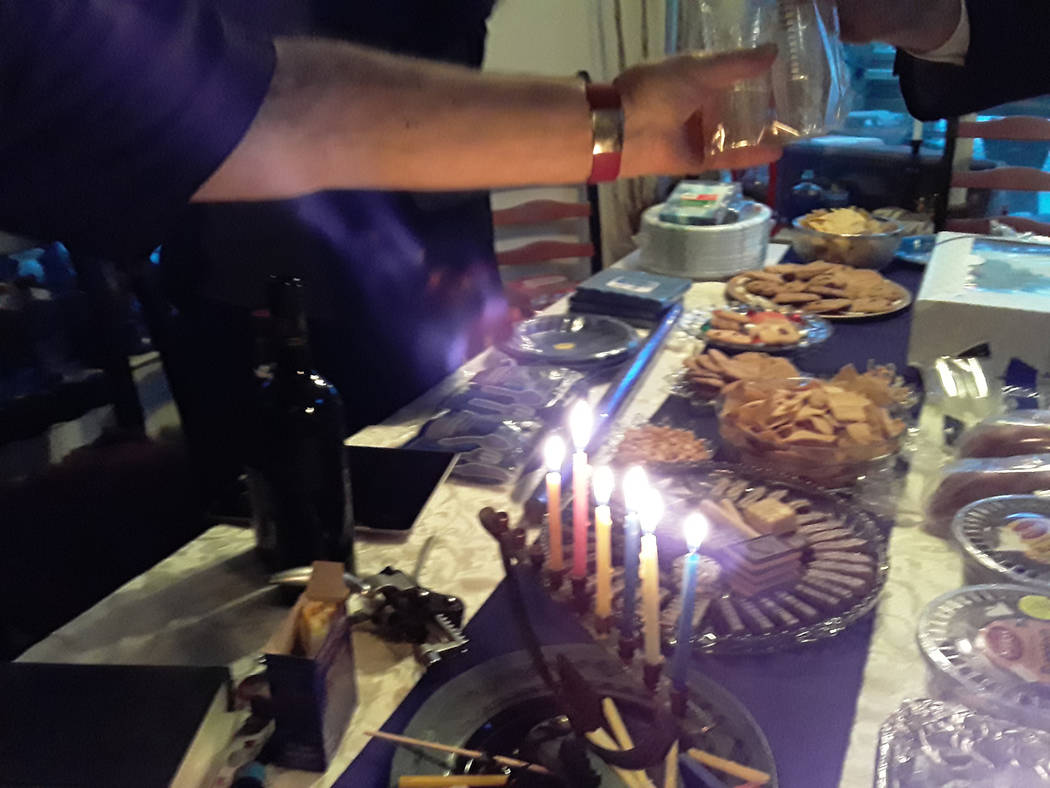 Selwyn Harris/Pahrump Valley Times Marty Greenfield prepares to break bread as a menorah glows on the table. Upwards of 50 friends joined Greenfield at his home during Thursday's Hanukkah Celebration. 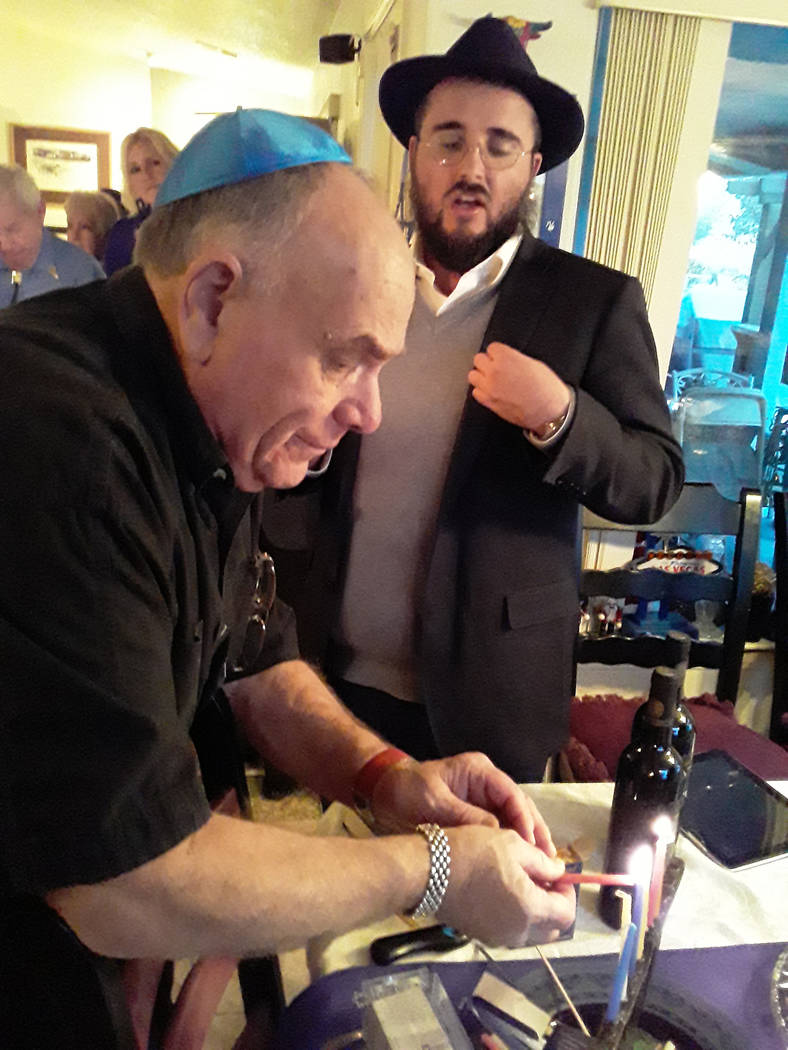 Like years past, Pahrump resident and businessman Marty Greenfield hosted an annual Hanukkah celebration once again at his home this year.

Greenfield, along with his partner, Elizabeth Sterling, invited upward of 50 friends and acquaintances to the celebration, which included the tradition of feasting on both kosher and a few non-kosher foods, as well as the lighting of the menorah.

“This is our fourth year of holding a Hanukkah celebration,” Greenfield said. “We light a menorah and get a cake in the shape of the Torah, made by made by the Smiths/Kroger organization, who made it kosher for us. We had a potluck where everybody brings a little of something. We also did prayers. It was very nice and festive.”

After his first Hanukkah celebration, which attracted roughly 20 guests, Greenfield noted the celebration gets slightly larger each year.

“The second year it got a little bit larger and last year we had close to 45 people, so every year it gets bigger,” he said. “This year we had approximately 60 people come to our home. Rabbi Levi’s father even flew in from Brooklyn, New York. We had kosher wine from Israel and we did prayers over the wine, and then it’s just a festival. These are invited guests who have come across my path over the years, who either want to join in on a Hanukkah celebration because of their connection with Judaism or just the connection of a holiday.”

During the celebration, Greenfield spoke about the tradition of observing the eight-day Jewish celebration of Hanukkah.

“It’s a major Jewish holiday and it’s called the Festival of Lights,” he said. “It commemorates the rededication during the second century B.C., of the Second Temple in Jerusalem. The Eternal Light is usually above the altar. When they rummaged through, they only found enough oil to last for one day. They were concerned they couldn’t create oil that quick for the Eternal Light to last longer.

“Well, the Lord blessed us and he gave us that little bit of oil and it lasted for eight days. So it was called the Festival of the Lights because the Lord provided us the Eternal Light for eight days and not one day.”

During the celebration, Chabad Southwest Las Vegas’ Rabbi Levi Wilhelm spoke of the gravity of the lighting of the menorah.

According to its social media page, Chabad of Southwest, at 5651 S. Grand Canyon Drive, Suite 110, is a major outpost of the worldwide Chabad-Lubavitch organization, which promotes Jewish education and outreach across the globe.

Rabbi Wilhelm was ordained by the Central Lubavitch Yeshiva and has held rabbinical internships in Germany, Peru and Russia.

“One little candle just lit 40 to 50 candles,” he explained. “One little flame was able to light up 50 other flames and I think that is a powerful lesson. Each one of us all have a flame in the Chamad inside ourselves. A little candle lit another candle, but it didn’t lose anything from itself, and we gained another candle. Those two candles lit another two candles, and they still remain full candles. That’s something we can say is infinite in this world.”

Greenfield, meanwhile, said he is interested in seeing a synagogue established in Pahrump for those who practice Judaism.

“We do have Jewish people here in town, but they go into Las Vegas to worship, or they don’t worship at all,” he noted. “I see a lot of people through my door and I get to hear things. I would say that we have about four or five hundred actual Jewish people in this town, but there is no synagogue here because I think there hasn’t been a strong enough nucleus to take the initiative and take the tenacity to do it. Along with Rabbi Levi, I am definitely willing to pursue this.”

Additionally, Greenfield said one of the main issues regarding the establishment of a synagogue in town is locating a rabbi to conduct the services.

“You have to make sure he has kosher accommodations, kosher food, and he’s got to be able to walk to wherever he is having the service, so his housing has to be somewhat close to what his needs are. I don’t know if our area can support a rabbi for 12 months out of the year. We actually talked about possibly getting a student who just graduated from the seminary and make it be his first actual, official duty.”