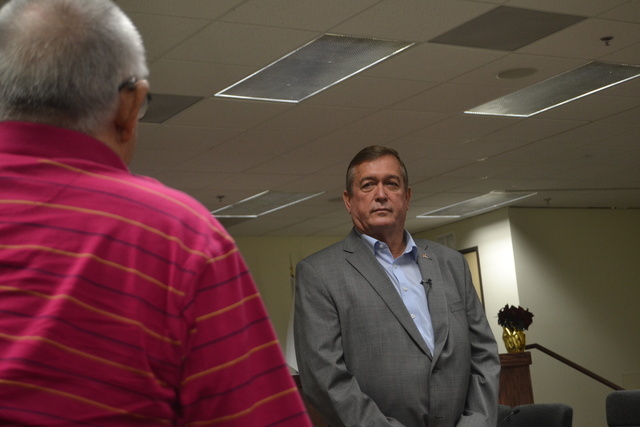 Congressman-elect Cresent Hardy met with Pahrump residents, business owners and municipal leaders on Monday in a town-hall styled listening session as part of a district tour.

Federal government overreach concerns were voiced by the majority of the approximately 45 attendees with the session largely focused on requests to help dismantle Bureau of Land Management’s authority over Nye County lands.

Hardy, appointed to the Natural Resources Committee, who touts himself as a “constitutional conservative” and a “state’s rights individual,” says that Nevada should be managed at a state level. “These are public lands, but I believe they are state public lands,” he said.

The ability to put land back on the tax rolls will allow financial gain for better services for Nevada citizens, he said. BLM manages approximately 6.5 million acres in Nye County, for which the federal government pays approximately $1.3 million annually to Nye County, in lieu of taxes. In support of the measure, Hardy referenced Utah’s efforts to restore property to that state’s tax rolls citing an estimated $1 billion per year in lost property tax revenue.

Hardy asked residents to not only voice concerns but to also offer possible solutions. The request elicited a myriad of suggestions including one that Hardy introduce legislation requiring federally managed land in the town of Amargosa be “donated” back to the town.

One resident at the meeting claimed that U.S. Senator Harry Reid’s proposal to withdraw 805,100 of federal land for conservation in Nye and Lincoln counties was an “appalling power grab and land grab.”

If additional land is rendered undevelopable because of proposed “visual preservation zones.” he said, tourism would suffer. Hardy agreed, saying, “What good are these beautiful lands, if we can’t get to them?”

Hardy said the federal government was attempting to establish wilderness zones throughout the state that don’t meet its own criteria.

In response to concerns about the costs associated with relocation of wild burros and mustangs, Hardy asserted that BLM has not lived up to its obligation to keep “horse free zones” throughout the state. He expressed his own concerns about the approximately $100,000 per horse spent on relocation and care.

He concurred with the sentiment of those gathered, “I think we have been deprived of the opportunity to be a laboratory of industry,” he said.

Hardy said he will take steps to educate Congressional members about how 7.2 million acres of federally managed lands can be put back on the tax rolls. “Now that the Republicans are in control, the legislation can be reintroduced,” he said.

Hardy is not opposed to all federally managed property, citing a need and appreciation for the Creech Air Force Base and similar military training facilities. “I’m not trying to take those areas back,” he said.

Funding of the proposed nuclear waste storage facility at Yucca Mountain is not off the table, according to Hardy. “I think we need to be in the game. I am not for or against Yucca Mountain,” he said. He is opposed, he said, to having the facility forced upon the residents of Nye County. His concerns lie in the safe transportation of waste to the site. “I think we need to be in that conversation,” he said.

Another area of government overreach, Hardy said, is in the Environmental Protection Agency’s attempts to clarify the definition of “navigable waterways” under the Clean Water Act. Passage of an amendment to the act, he said, will “do major damage to the west.”

He was non-committal regarding both medicinal and recreational use of marijuana. Though he stated he was in favor of individual freedoms, he noted that government has the responsibility to take care of those who can not take care of themselves.

The comments elicited a question about Hardy’s regarding the implementation of an executive order to halt deportation and provide work permits for an estimated five million undocumented immigrants who met certain requirements. Hardy said the issue needs to be studied but saw it as an opportunity at welfare reform. He noted that some citizens “won’t take a job because they think it’s beneath them. We need to start teaching people that one of the greatest opportunities is work,” he said.