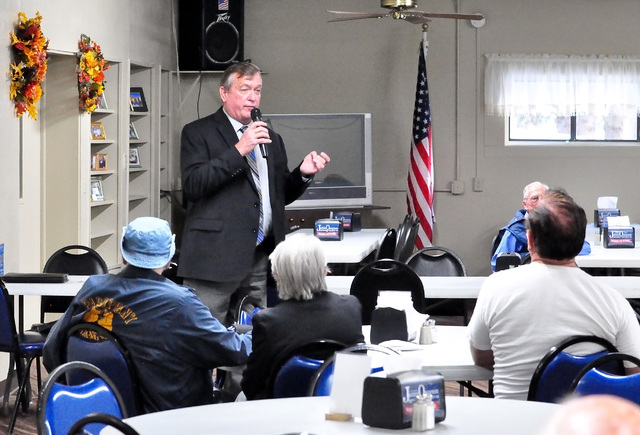 The campaign of Republican U.S. Rep. Cresent Hardy pounced on a rival Democratic campaign that initially misfired by claiming Hardy opposed a measure to ban the Confederate flag from veterans cemeteries.

The vote in question came on Thursday, and Hardy was one of 265 members of Congress who supported the amendment to ban the Confederate flag from VA cemeteries.

Hardy’s team swiftly moved to knock down a tweet from Democratic candidate Ruben Kihuen, a state senator and one of eight Democrats running in the June 14 primary for the 4th Congressional District. Democrats hope to unseat Hardy, a freshman congressman who is seeking a second term, in the general election.

“Shameful @RepHardy broke w/ his leadership &joined Tea Party in voting against a ban on the Confederate flag at VA cemeteries today,” Kihuen tweeted on Thursday. His campaign also put out a press release with Kihuen denouncing the vote.

Hardy Campaign Manager Ross Hemminger fired back: “It’s one thing to have serious disagreements on policy, but quite another to blatantly lie about a publicly recorded vote. This statement, in addition to being made up out of thin air, shows us how desperate professional politician Ruben Kihuen has become. The people of the 4th district should take note — if Ruben Kihuen can’t be trusted to fact-check his own press releases, then how can we trust him to represent us in Congress?”

Kihuen’s campaign quickly walked back the initial version, saying they confused two votes in the first statement but stressing there are problems with Hardy’s record that voters should focus on. Kihuen also put out a corrected tweet.

Hardy’s campaign said that vote about military academies, tied to the National Defense Authorization Act, was strictly a procedural step to keep the bill from going back to committee so it could proceed through Congress.

Hemminger said Kihuen’s campaign was “caught red-handed and trying to spin this.”

“The NDAA funds our military and pays our troops,” Hemminger said. “Congressman Hardy believes those issues are too important to play politics with. The NDAA, which ensures funding and pay for the good people of Nellis, Creech, and other military installations in the 4th district, is too big of a bill to get ‘confused.’”