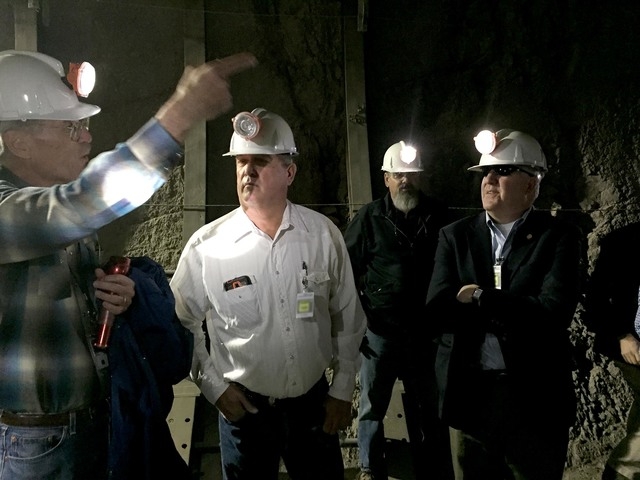 Nevada Congressman Cresent Hardy emerged from Thursday’s tour of Yucca Mountain restating the need for an “honest” discussion about the proposed nuclear waste site, and then let science be the guide.

However, the freshman lawmaker reiterated that he “is still not for it, or still not against” the site being used for its original purpose, but wants to see the issue of storing the nation’s waste at the site put “to bed once and for all.”

“(Yucca Mountain) has been a polarized view, one side or the other,” Hardy said. “Let’s have the science come together. The opposing science from the state of Nevada come together with the Nuclear Regulatory Commission and let’s have that open discussion.”

The congressional delegation was organized by the Department of Energy at the request of Rep. John Shimkus, R-Ill., who is chairman of the House Energy and Commerce environment and economy subcommittee, and a leading advocate of reviving the program.

“It’s 30 years and a $15 billion investment by the nation,” said Shimkus after the five-mile, 90-minute tour. “Again with the facts that the (Nuclear Regulatory Commission) has said it will be safe for a million years, it’s an investment that we need to keep in mind as we move forward.”

Also on the tour were Rep. Mark Amodei, R-Nev., Bob Latta, R-Ohio, Jerry McNerney, D-Calif., and Dan Newhouse, R-Wash., as well as their staffers, representatives from the DOE, and a small group of journalists. That group of 35 people made the journey nearly 1,600 feet into the south end of the tunnel, stopping along the way as William Boyle, DOE director of the office of used fuel disposition, research and development, explained the history and science of the exploratory tunnel.

Work began on the tunnel in September 1994, and took 31 months and $74 million to cut the five-mile route through the volcanic rock. The $13 million machine that carved that path, called the “Yucca Mucker,” sits outside the south portal where it finished its journey nearly 18 years ago. Much of the rail, which is nearly 100 years old and was repurposed from a U.S. Navy yard, still sits within much of the Yucca tunnel.

The group split off at the 1,600-foot point with Boyle and the congressional delegation taking all-terrain vehicles the rest of the way through the tunnel, with the remaining group exiting the 25-foot-diameter tunnel taking vans and rejoining the lawmakers outside the north portal.

“You tell the difference from the beginning to the end,” he said. “It gets a more secure feeling as you get to the middle parts of that tunnel (where the waste would be stored). I understand how it’s going to work a little more.”

Not on the tour were Nevada’s two other congressional representatives, Democrat Dina Titus or Republican Joe Heck. Nor were any staff members from U.S. Sens. Dean Heller and Harry Reid, both vocal opponents of reviving the project.

Yucca opponents said the trip was designed more for political theater than for scientific inquiry, including a decision to exclude the state’s geology consultant Steve Frishman, a member of a Nevada technical and legal team that has built evidence it says shows that Yucca Mountain would be unsafe to store highly radioactive waste.

However, Nye County Commissioner Dan Schinhofen and other county representatives, who support the project’s return, were also told they could not be accommodated.

While the Department of Energy arranged details of the tour, officials said it is customary for congressional sponsors to set the guest list.

Hardy said he was grateful for Shimkus including him on the visit, even though the freshman lawmaker doesn’t sit on any committees dealing directly with nuclear waste storage.

“I’m just just glad I came and looked at it,” Hardy said. “This is my district and I have a responsibility to come and see what’s going on. I want to learn as much as I can about everything.”