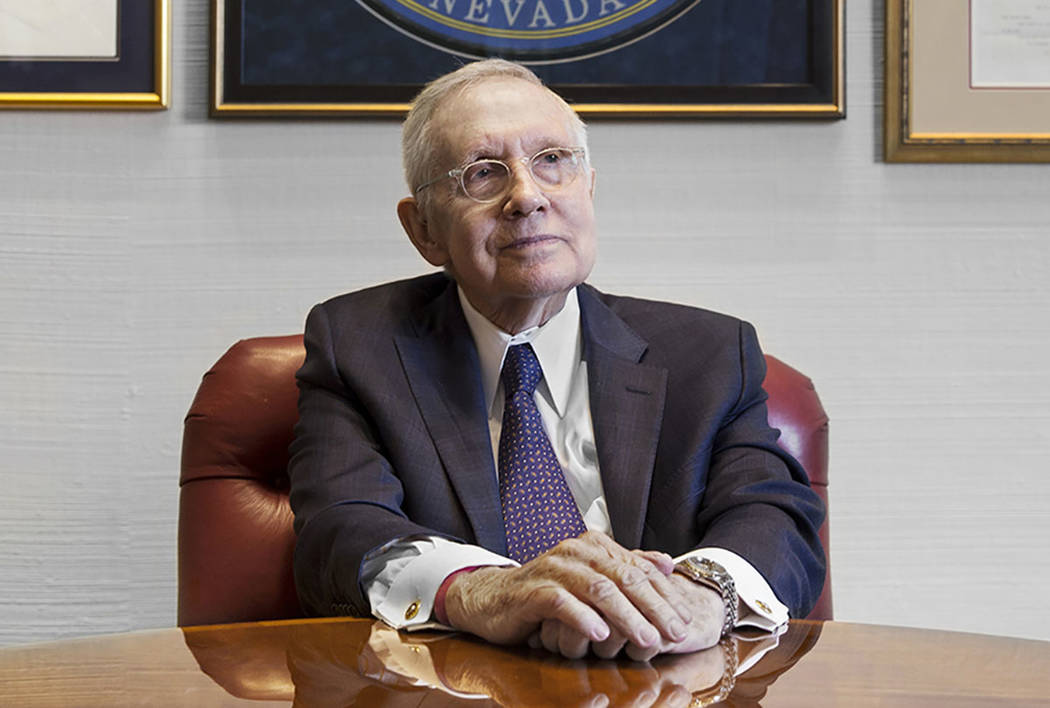 Former Sen. Harry Reid, D-Nev., sits at his office in the Bellagio in February 2019 in Las Vegas. Reid served as a Senator from 1987 to 2017, and was leader of the Democratic Caucus and Senate majority leader. (Benjamin Hager/Las Vegas Review-Journal) @BenjaminHphoto 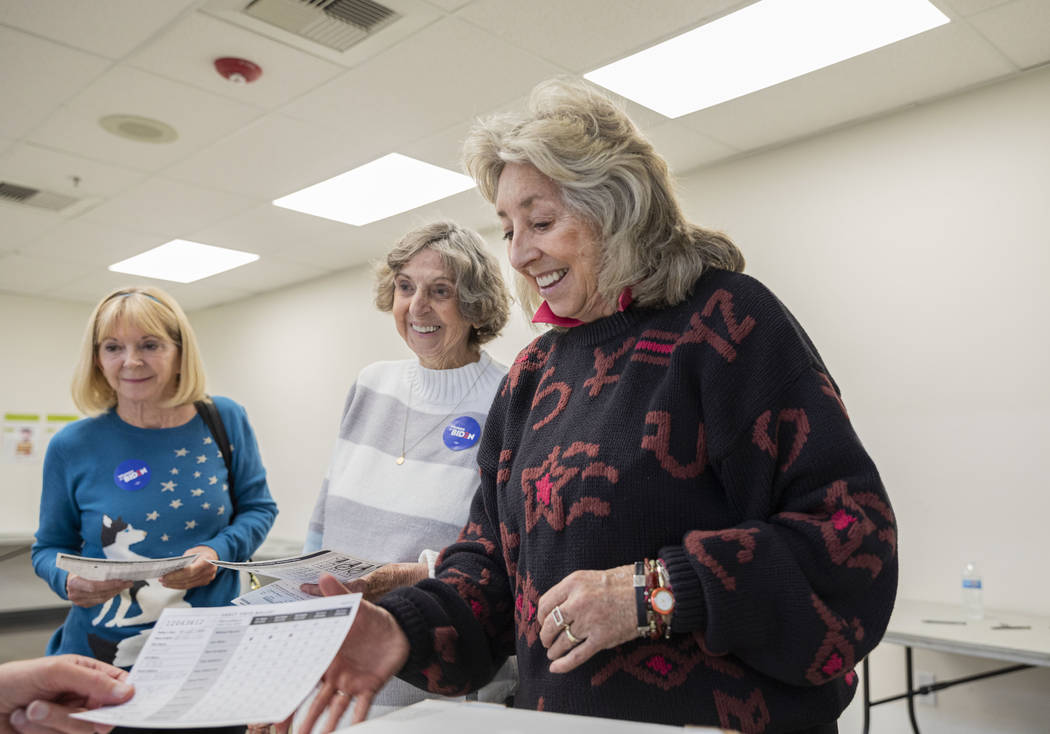 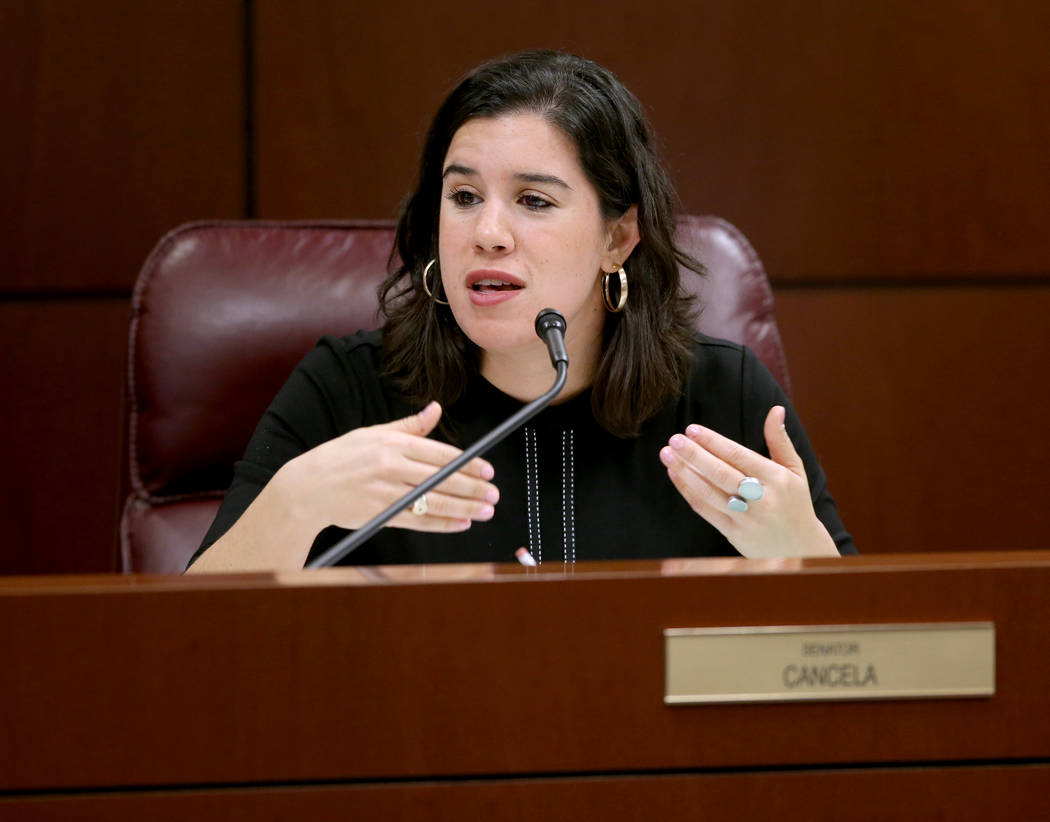 Will Saturday’s Nevada Democratic presidential caucuses be the last ones held in the state?

On Sunday — as the party was still counting votes — there were growing indications that Nevada could switch to a presidential primary election.

“With so much Democratic enthusiasm in Nevada, demonstrated again by the tremendous caucus turnout this year, I believe we should make the process of selecting our nominee even more accessible,” Reid said. “We’ve made it easier for people to register to vote here in Nevada in recent years and now we should make it easier for people to vote in the presidential contests. That’s why I believe it’s time for the Democratic Party to move to primaries everywhere.”

It was a surprising change of heart from Reid, who has long championed the caucus for its ability to register new Democratic voters, helping President Barack Obama win the state twice and boosting Reid in his 2010 re-election bid.

Reid’s comments are also surprising because Nevada’s use of the caucus played into nabbing that early spot on the calendar, balancing the primary states of New Hampshire and South Carolina with the caucus states of Iowa and Nevada. (Currently, just four states — Iowa, Nevada, North Dakota and Wyoming — use caucuses, along with U.S. territories such as Guam, American Samoa, the Northern Mariana Islands and the U.S. Virgin Islands.)

Reid also sought to boost Nevada even higher on the calendar, saying, “I firmly believe that Nevada, with our broad diversity that truly reflects the rest of the country, should not just be among the early states — we should be the first in the nation.”

Reid isn’t alone in calling for an end to the caucuses, either.

“I think this is the end of the caucuses, and it should be,” said Billy Vassiliadis, a key political insider in Nevada. Vassiliadis, the CEO of R&R Partners, said younger people especially are put off by the antiquated caucuses system, which requires a few hours of time and discussing politics with strangers.

This year, the Nevada Democratic Party offered an early voting option, in which voters marked their choices on a preference card that was counted on caucus day. About 75,000 people took advantage of that option, some undoubtedly to avoid having to participate in the caucuses live on Saturday.

“People didn’t leave,” she said. “They complained, but they stayed in line, because they thought it was important to stay or there’s too much at stake.”

Still, Titus said, she thinks there’s probably support in Nevada to switch from caucuses to a primary election.

“Popular sentiment is in favor of it,” she said. “It’s worth studying, I think.”

A Review-Journal/AARP Nevada poll found 67 percent of people want to switch to a primary system, and just 23 percent wanted to retain the caucuses.

“The state party did a tremendous job making sure we learned from Iowa’s mistakes,” she said. “I am interested in potentially exploring whether there are other options to ensuring as many people can vote, do vote.”

Titus and Cancela endorsed Biden in the caucuses, and Cancela advised the Biden campaign.

Gov. Steve Sisolak has said he thinks the Legislature will take up the issue in 2021. If it does, it would not be the first time.

In 2015, a bill was introduced that would have moved the state’s regular June primary to the last Tuesday in February, and added a presidential primary to the ballot at virtually no cost. The bill — sponsored by Republican state Sen. James Settelmeyer — was designed to increase participation in the election.

“People from both parties expressed dislike for the lack of privacy in the caucus process,” Settelmeyer said at one hearing. “The president should be selected through a secure electoral process where everyone has the opportunity to cast their votes in a private manner.”

Unlike primaries, caucuses require voters to publicly state their allegiance to a candidate.

The bill was amended several times, ultimately keeping the state’s regular primary in June and holding a special election exclusively for president in February. (State lawmakers objected to moving the primary up, saying they’d have to file for office and begin raising money around the Thanksgiving, Christmas and New Year’s holidays.)

The bill passed on a party-line vote in the Senate but failed to get a vote in the Assembly.

Among the questions the Legislature would have to address in a switch: Should the presidential primary stand alone in February, or should it be combined with the regular state primaries for other offices?

If it stands alone, how much will it cost to put on, and what new resources might county elections officials need?

How should it be paid for — by parties, by the state or by filing fees charged to access Nevada’s primary ballot?