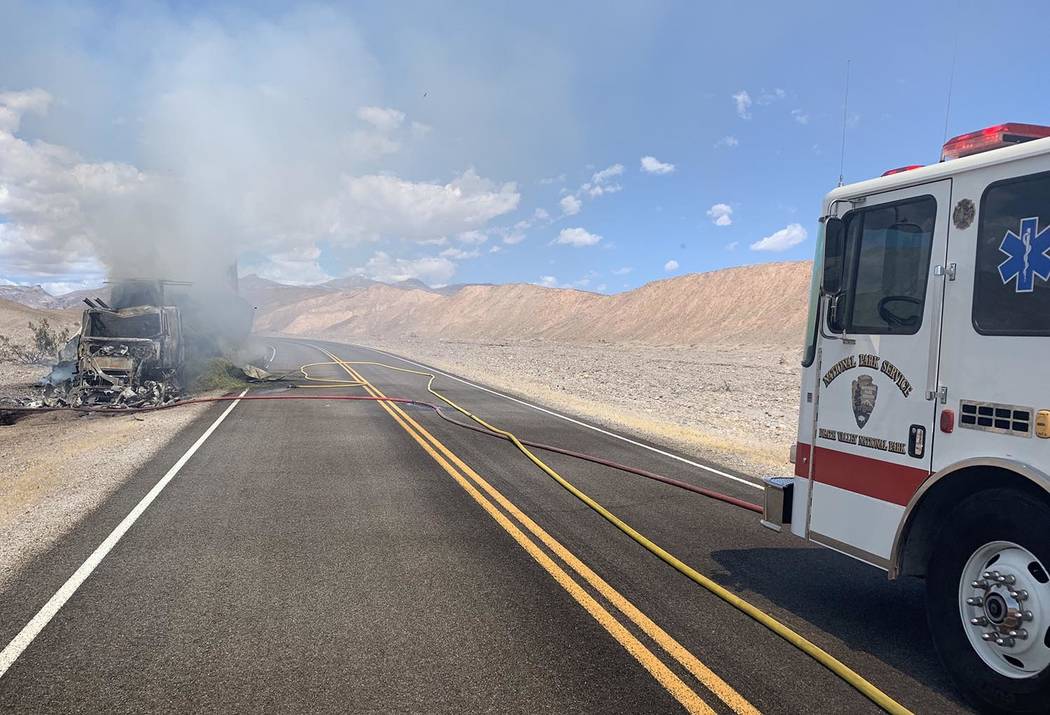 Death Valley National Park The driver, a 44-year-old man from El Cajon, California, was transported by ambulance for medical assistance.

Daylight Pass Road in Death Valley National Park reopened on May 15 after being closed for several days due to a commercial vehicle that caught on fire.

Commercial trucks are prohibited on park roads, and park rangers are concerned about safety hazards posed by frequent violations of this restriction, Death Valley National Park said in providing details via a news release.

On May 11, a man driving a tractor-trailer headed towards Las Vegas on U.S. Highway 95 took a wrong turn in Beatty. As the driver entered the park, about 9 miles from Beatty, he passed a sign prohibiting trucks.

The incident happened as the truck descended the west side of Daylight Pass. Park rangers noticed smoke in the area around 2 p.m. and responded with a fire engine to find the truck and its cargo of hay bales engulfed in flames. The driver, a 44-year-old man from El Cajon, California, was transported by ambulance for medical assistance.

During the partial shutdown of the federal government, park rangers responded to a similar incident on Jan. 8, 2019. A truck hauling frozen food rolled over in Mud Canyon, west of Daylight Pass.

In another incident, a truck hauling bottled water caught on fire on Daylight Pass Road on Aug. 23, 2018.

Death Valley National Park’s roads aren’t designed for use by tractor trailers and commercial vehicles are prohibited from using park roads. Park roads have long, steep grades. Extreme temperatures contribute to the risk of overheating brakes. Park visitors can create hazards because they often drive erratically or stop in the middle of the road.

Superintendent Mike Reynolds said, “Every truck driver I’ve ever talked to who decided to drive through the park, that didn’t have to, regretted their decision after the fact due to the extreme road conditions found here.”

The only road inside Death Valley National Park that is open to commercial traffic is California Highway 190. However, Highway 190 gains and loses about 5,000 feet of elevation over Towne Pass, with grades up to 9.3%.