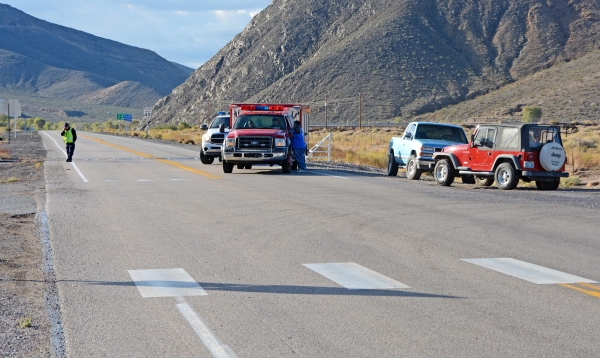 Things are back to normal after fire at a waste disposal facility outside Beatty closed down a portion of Highway 95 for almost a full day.

The fire adjacent to the US Ecology Nevada’s Treatment Storage and Disposal facility was reported Sunday at 1 p.m. at one of the closed low-level radioactive waste disposal cells.

After numerous tests were run on the site to determine if any environmental impact occurred as a result of the fire, the highway was deemed safe and was reopened Monday after being shut down for almost a full day.

“Approximately 24 hours after notification of a fire at a low-level radioactive storage site near Beatty, Nevada, the State of Nevada has determined that there are no known current health risks to area residents associated with the fire,” a statement from the Nevada Department of Public Safety said. “Director Jim Wright has authorized the opening of U.S. Highway 95 beginning at 5:30 p.m.”

The radiological testing included high-altitude testing conducted by fixed-wing aircraft and intermediate altitude testing conducted by rotary-wing aircraft over the site of the fire, both conducted by Remote Sensing Laboratories. A joint team made of up Las Vegas ARMOR personnel, Nevada National Guard Civil Support Team personnel, and additional members from Remote Sensing Laboratories, was also sent to the area to take ground-level readings.

All levels of testing conducted resulted in negative readings for radiation.

The entire operation took the joint efforts of several agencies working together to ensure everything regarding the situation was carried out in the safest possible manner.

“This was a serious incident, and one that could only be solved through collaboration between state, local, and federal partners,” said Caleb Cage, chief of DPS’ Division of Emergency Management. “We are pleased with how efficiently and effectively our partners deployed from throughout the state to respond to this significant event, and we look forward to working with all parties on the causal investigation and mitigation measures going forward.”

All agencies involved are still assessing the area to ensure the safety of those in surrounding areas.

“They continue to work closely together to monitor the situation. The Governor has approved the mobilization of state assistance and resources to access the incident,” a statement from the Department of Public Safety said. “The state Emergency Operations Center in Carson City has been activated to continue coordinating resources and provide updates.”

Gov. Brian Sandoval, who made the fire the state’s top priority shortly after learning about it Sunday afternoon, received a briefing Monday afternoon regarding the testing results and ongoing efforts and was pleased with the efforts of all involved in the handling of the fire.

“I would like to thank all of our local, state and federal partners for their immediate and continued attention to this matter,” said Sandoval in a statement.

The disposal cells held at the site were closed in 1992 and under the control of the Nevada Department of Health and Human Services.

An “exclusion zone” around the US Ecology facility was established at the request of the state until a full assessment could be made and will continue supporting agency efforts as needed.

Representatives from the U.S. Environmental Protection Agency were also at the site.

In 2010, the EPA fined US Ecology almost $500,000 for 18 hazardous waste violations, including smoke coming from a hazardous waste unit designed to thermally treat contaminated materials like soils, to remove the hazardous components and six leaks of uncontrolled polychlorinated biphenyl that weren’t reported, which is required by law.

PCBs, or polychlorinated biphenyls, are toxic, organic pollutants that remain in the environment. They were once regularly used in electrical transformers and capacitors but are no longer used in the United States.