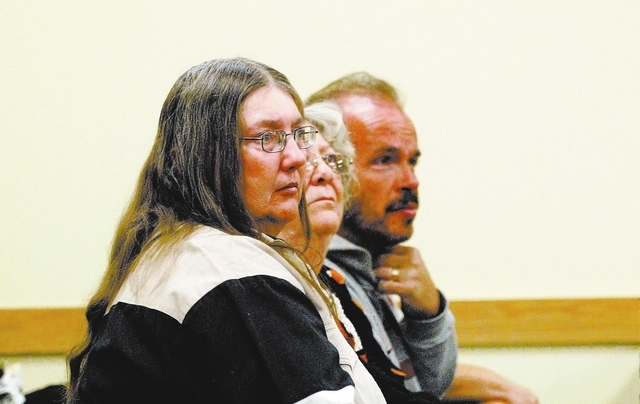 Defense counsel for a woman accused of attempting to procure a driver’s license under another person’s name to avoid prosecution claimed during a preliminary hearing this week their client wasn’t attempting to obtain another identity, but rather to renew her sister’s expired license for her.

In the first case, Davis appeared on one count of first degree arson and 13 counts of animal abuse.

In the second she came before the court on charges of obtaining and using identifying information of another person to harm or impersonate a person, to obtain certain nonpublic records or for another unlawful purpose; offering false instrument for filing or record and burglary.

Davis was first arrested in the arson case last year after Nye County Sheriff’s deputies and Pahrump Valley Fire Rescue Services were called to the former Dream Chaser Horse Rescue owner’s home at 3610 N. Murphy Street on July 12 for a report of a female attempting suicide.

When police arrived, they could see a woman through a window of the home holding a gun.

As they attempted to convince her to come out of the residence, a fire reportedly began in a rear room of the home, eventually forcing Davis outside.

After Davis was taken into custody, it was discovered the fire had claimed the lives of 17 dogs inside the home.

She was released from custody on her own recognizance. But the Nye County District Attorney’s Office charged Davis again in December with trying to obtain a driver’s license under another person’s name at the local DMV in October.

At that time, Justice of the Peace Ron Kent revoked Davis’s OR release status and placed her in custody. She later posted bail and as of Thursday morning remained out of custody.

The preliminary hearing in the arson case was postponed and a continuance granted.

The hearing on the alleged attempt to obtain a fraudulent ID, however, went forward.

Deputy District Attorney Patrick Ferguson called two witnesses from the Nevada Department of Motor Vehicles to the stand during the hearing.

The first was DMV Technician Tammy Nielsen. She told the court Davis came into the Pahrump DMV, located at 1780 E. Basin Road, on Oct. 15, 2013 to renew an expired driver’s license and change the address on it.

She testified Davis handed her a standard DMV form with a name other than Diane Davis on it. When the technician asked to see the expired ID, Nielsen said Davis allegedly told her she had lost it.

She said everything appeared to be in order until the facial recognition technology the DMV uses claimed Davis’ photo failed to match known photos in the DMV system.

Davis’ defense attorney Steven Altig asked the technician if at anytime Davis had informed her she was renewing the license for her sister, to which the woman replied Davis did not.

Following her testimony, Chester Clagett, an investigator with the Nevada DMV’s compliance enforcement and fraud unit testified he was assigned the case after a photo taken at the Pahrump DMV had come to his office for review.

Upon further investigation, he said the photo taken under Davis’ sister’s name in October, matched Davis’ photo on her license, which was not up for renewal at that time.

Ferguson asked that Kent bind Davis over to the District Court level to answer to the charges there.

“At the time Ms. Davis had very recently been charged with second degree arson … Three months after those charges arose she was down at the DMV obtaining a license in another person’s name. She could then board a plane, go wherever she might choose and escape detection.”

Altig said his client was simply trying to help her sister.

“What you’ve heard, your honor, is speculation and conjecture,” he said.

Davis’ attorney then reminded the judge that she has remained in Pahrump, coming to every court appearance.

The case was bound over to District Court.