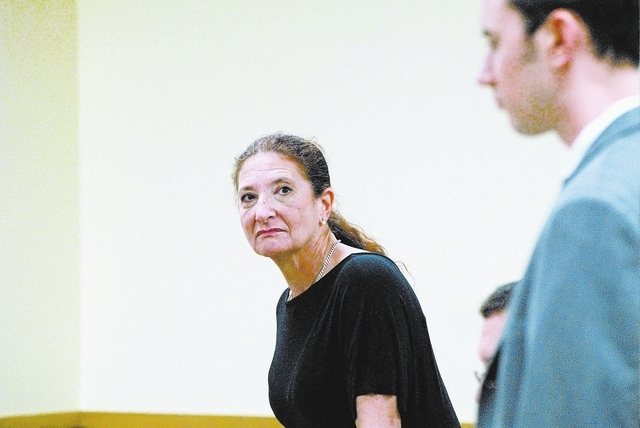 A local attorney’s motion to dismiss animal abuse charges against her was denied this week after a judge ruled her argument that the prosecution should not be allowed to amend their criminal complaint after the statute of limitations had passed was invalid.

Nancy Lord appeared in Pahrump Justice Court Monday for a hearing on a motion she submitted last year to have three counts of cruelty to animals, which she was charged with following several visits by Nye County Animal Control to her property in 2012, dismissed.

In her motion before the court Monday, Lord argued that in the original complaint filed by the Nye County District Attorney’s Office, the ordinance she was cited with in the paperwork had not gone into effect as of the date of the alleged offenses.

After she filed her motion to dismiss the charges, the state reportedly asked the court to amend the complaint to cite the correct state statute, rather than the county ordinance, which was in effect at the time of the alleged offense. Lord argued the prosecution should not be allowed to make such a change as the statute of limitations had already passed on the matter.

“They simply filed the complaint one week after the completion of the one year limitation statute. I think a lot of this arguing comes from civil procedure where it is very clear under the civil rules that if you have a John Doe or rogue defendant, you can amend it to later add the name of the person you find out to be the person who did it. There is no such law in criminal procedure. They can amend the complaint, but the NRS doesn’t really address amending the complaint after the statute has expired and to add a completely new statute when the first one charged wasn’t even in effect. I would move to dismiss this case and the amended complaint filed after the statute of limitations and ask your honor not to allow the amendment,” she said.

Deputy District Attorney Patrick Ferguson, however, argued the purpose of the statute of limitations on any crime is in fairness to defendants, to keep them from being charged out of the blue years after an incident occurred.

He said the correct statute was cited in the original citation Lord received from Nye County Animal Control, and while the DA’s office may have filed the criminal complaint with the wrong statute, she knew what she was being charged with.

“Ms. Lord was notified originally of the correct charge, the correct statute or ordinance, we made a mistake in the statute or ordinance and due to delays the case didn’t really get going with the court until many months later,” he said. “I would like to point out that these events were alleged to have occurred between June of 2012 and Oct. 18, 2012. Ms. Lord made an appearance in July of 2013. She didn’t bring this motion then, but rather waited until after a year had passed before she brought this motion to say, ‘okay now the statute of limitation has run and now I want to point out they have the wrong ordinance’…What it comes down to is Ms. Lord has been aware of what she has been charged with since the inception. They were correct, we got them wrong, and now they are corrected again. In fact, the prevailing understanding of statute of limitation is once a complaint has been filed that’s really the end of the statute of limitation issue.”

Lord responded that it is not her job to do the state’s job and make sure they have the correct statutes in their filings.

Justice of the Peace Kent Jasperson ultimately sided with prosecutors and denied the motion to dismiss the charges.

“I tend to agree with the state. Once a complaint is filed, whether it be a misdemeanor citation, a traffic citation, whatever the form might be, that ends the statute of limitation argument. The DA’s office has the ability to amend the complaint as many times as they want to while the matter is pending before the court, that’s their right, as long as the original complaint has been filed. Based on that information I think the motion should be denied and we should move forward,” he said.

A bench trial was subsequently scheduled for Feb. 4.