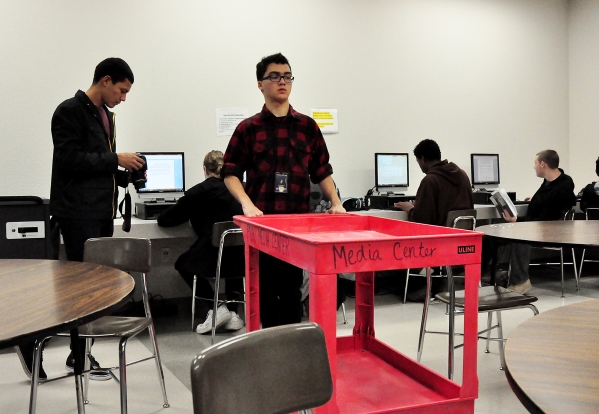 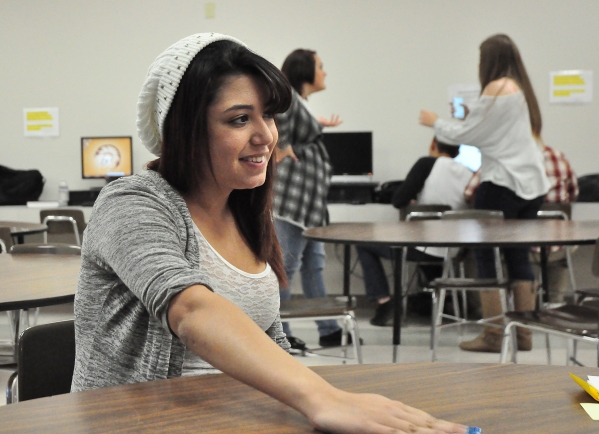 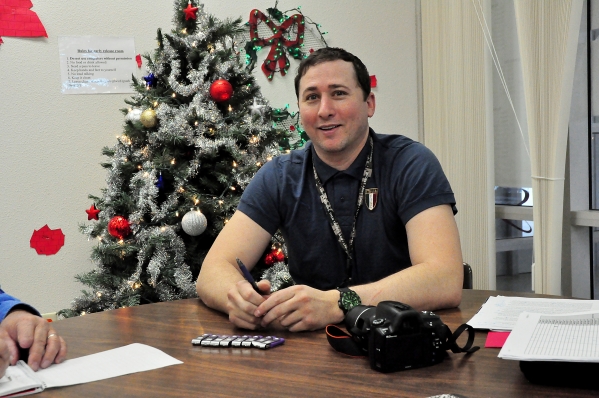 Pahrump Valley High School started journalism classes and put out its first newspaper this fall. The newspaper is called the “Trojan Tribune,” and it debuted in October.

The class is being taught by English teacher Charles Larssen and is an elective, which is open to all who want to work on the paper.

“Being an elective, we don’t always get students who know what the class is all about,” he said. “Some students came to the class and were surprised that they would be asked to write newspaper articles. Some even thought they were only going to be reading newspapers.”

After the initial shock though, the students have already published two papers and have come together as a class. Despite the lack of knowledge on the part of the students, he says the students have risen to the occasion and worked hard to learn the business of journalism.

The class was busy working on its second edition when the PVT visited the Tribune office, which happens to be in the computer room in the school library.

Larssen said after the first year the paper should come out more regularly and it’s meant to be a monthly. This year he hopes to put out six issues.

Larssen’s vision of the paper is to eventually have a trained staff that can run the paper.

“I would hope that future students will come to class and be able to put the paper together with little supervision,” the teacher said.

He said the hardest thing for students is to get out of the mode of writing essays.

“Students have a hard time with the format of news stories,” he said. “They also hate the rewrites. They think that once they turn it in, that’s it, it’s done, and that’s not the case.”

The chief student editor of the paper is Jackie Aguilar.

Aguilar said she took the class to get experience writing and working as a reporter, but really had no idea what the job was about.

“I took this career test online and it said I should be a reporter,” Aguilar said. “I do like to be informed and I feel I am a strong writer. This class has been helpful to me and it has helped with my sentence structure.”

She had to interview the Nye County Superintendent of Schools Dale Norton for her first article in the first edition.

“I found the superintendent to be interesting because I am new to Pahrump,” she said. “I really enjoyed learning about what he does. I learned he wants to be involved with students and likes to eat lunch with them.”

She also learned he was a teacher and a principal before he became superintendent. Aguilar said she didn’t get nervous during her time with Norton because he was so approachable.

Steven Plemon is another student assistant editor who knew little about putting together a paper when he first started.

“When I first started writing, I was worried about getting the facts right,” Plemon said. “I was afraid people would complain I got the facts wrong.”

He said the hardest part about being in the class is meeting deadlines.

“It’s different than homework, there we just turn something in,” he said. “But with our stories, we have to turn them in on time and then hundreds of people read them and we get a grade.”

The second edition to the paper is already out and copies are available at the school office on Monday.