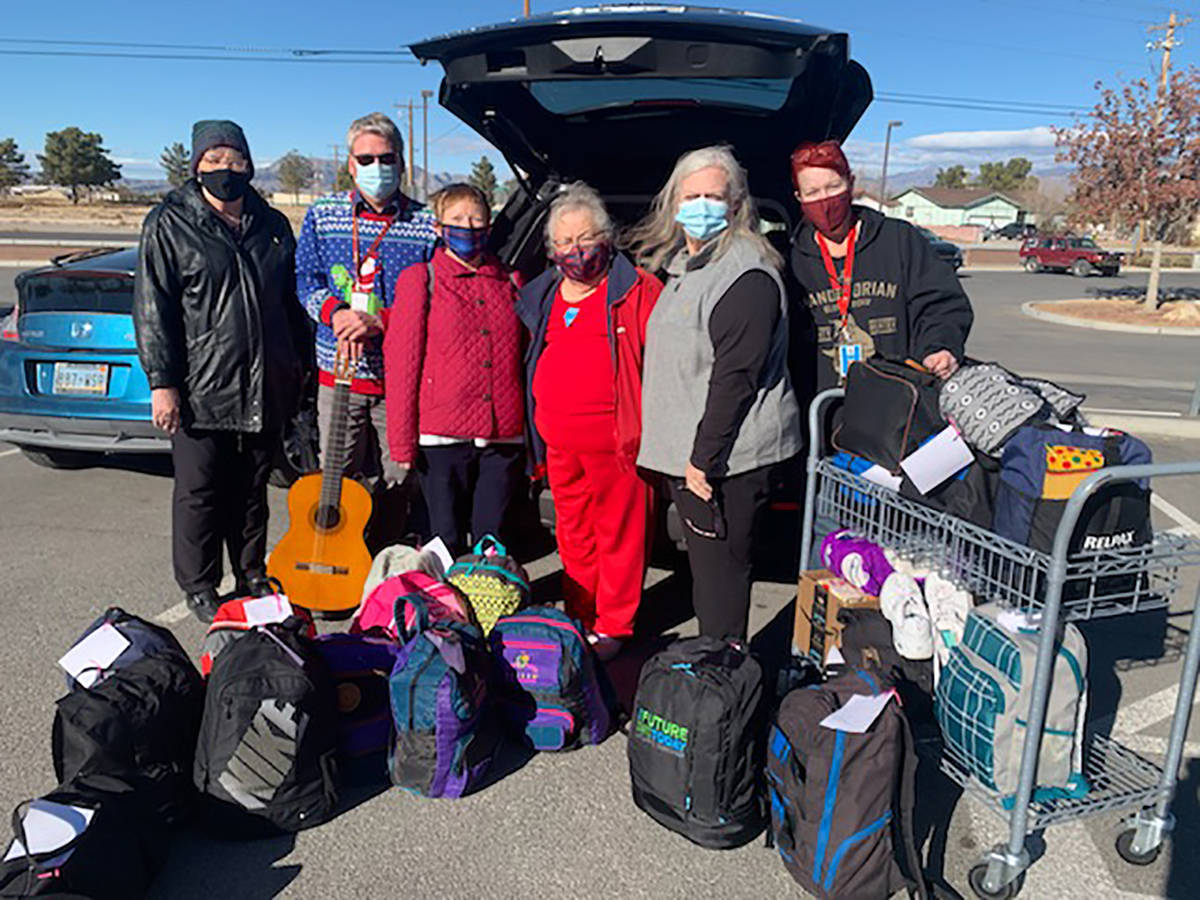 A committee associated with the Pahrump Springs Chapter of the National Society of the Daughters of the American Revolution, (NSDAR) bestowed Pahrump Valley High School students with essential food items to help meet their nutritional needs.

The organization’s Regent, Rose Humbert said one of the chapter’s officers initiated the action of providing support for a select number of students.

“Our vice regent, Barbara Blitz, came up with the idea of purchasing used backpacks and filling them with nonperishable protein-rich foods, such as canned tuna, chicken, hearty soups and peanut butter,” Humbert said. “Our community classroom chairman, Donna Mason, is also working with her as a team. They had put together six backpacks and then the chapter rallied around and we presented 12 in November and 20 in December.”

Though the years, the organization has provided clothing items for the high school’s “Trojan Trunk”, which provides various clothing items such as jackets, socks, underwear and shoes. Humbert noted that amid a pandemic which has many individuals and families relying on area food pantries, providing the backpacks was an obvious choice.

“We tried to make sure there were ‘eat on the run’ snacks available for the students to grab in between classes, but this fall we realized there were many families with teenagers in their home who were not able to meet their food needs,” Humbert said.

Additionally, Humbert spoke about another program undertaken by the organization last month.

“While this has been going on, we had member Della Christie devoting her time to prepare for and disperse 92 Wreaths Across America for the national cemetery at Boulder City,” she said. “And in the two weeks before Christmas, we were able to get donations to assist the Yomba Shoshone and Duckwater tribes with food and warm clothing.”

Though the Pahrump Springs Chapter of the Daughters of the American Revolution was organized Dec. 6, 2003, the roots of the national organization, by definition, dates back to the founding of the United States, with the simple mission of promoting historic preservation, education and patriotism, Humbert noted.

“Membership in the DAR requires a woman to prove direct lineage to an ancestor who aided in achieving American independence,” she said. “Our projects for Nevada are U.S. military support, service to veterans, the Nevada Genealogical Records indexing, scholarships and preservation of the Nevada state DAR. There are 17 chapters in the state of Nevada including our local Pahrump Springs Chapter, which currently has 37 members. Our motto is God, home, and country.”

Members of the Pahrump Springs Chapter usually meet on the second Wednesday of each month, September through May, at 10:15 at the Pahrump Community Library, however, due to COVID-19 concerns, the meetings, at present, are now being conducted via Zoom.

For those who would like more information on the organization, login to www.pahrumpspringsdar.org.