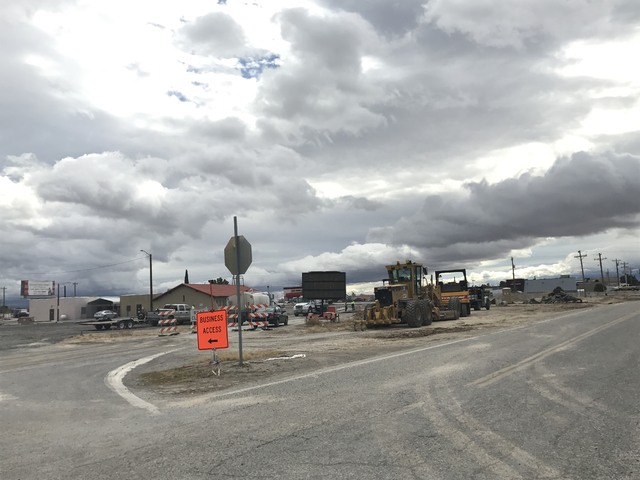 The $4.05 million roundabout project on a one-mile-long stretch of Highway 372 at the intersections of Blagg Road and Pahrump Valley Boulevard is making progress. Mick Akers/Pahrump Valley Times

Despite opening up the 1.75-mile stretch of Highway 160 in town after taking the road from two travel lanes to four, but not being 100 percent complete, the cones popped back up Monday morning.

That was a temporary issue, according to the Nevada Department of Transportation, as hydroseeding was taking place around the shoulders of the roadway which stretches from Rainbow Avenue to Calvada Boulevard. Hydroseeding is a technique used for erosion control.

Wednesday morning the roadway was back open to four travel lanes, but the traffic cones were still present on both sides of the highway.

“The barrels were removed Thursday. This time they will not be back for several months, most likely,” said Tony Illia, NDOT spokesperson.

The $3.5 million widening project of Highway 160 was slated to finish in November but was then pushed back into December, and now has been extended to finish in March. The delay came about due to storm drain issues and now weather-related issues.

The speed limits in the area will go back to what they were before the project started.

Coming northbound into Pahrump, the speed limit drops to 45 mph between Rainbow Avenue and Winery Road. Then it drops down to 35 mph just before Calvada Boulevard.

The other major road project in town that NDOT has going is the pair of roundabouts being constructed on Highway 372, which broke ground in October.

The $4.05 million project, which includes a pair of roundabouts along a one-mile-long stretch of Highway 372 at the intersections of Blagg Road and Pahrump Valley Boulevard, will create sections of new curb, gutters and sidewalks, as well as new handicap-accessible pedestrian crossings in each direction.

The contractor of the project, Las Vegas Paving, has been working daily on the project, according to Illia, including four days last week.

The only time work crews are not present is when weather-related issues occur.

“There were a few days from time to time when work was shut down due to rain,” Illia explained.

Last week, the north half of both roundabouts were paved with the asphalt underlayment, and after setting up for paving, both are tentatively scheduled for concrete paving next week, NDOT said.

Also, work continues on the curbs, gutters, sidewalks, and street light conduits. The north half of the roundabout will be finished enough for the traffic shift approximately by the end of the month, Illia said.

The project is slated to be complete by the end of April, barring any unforeseen delays.

Once finished, the project will include new street lighting and signage. Stretches of asphalt and concrete paving with a friction finishing the course on nine valley gutters where certain streets intersect with Highway 372 that will help vehicle tires grip the road to prevent skidding are also on the plans.

Cor-Ten steel art sculptures of wild horses, bighorn sheep and birds will also adorn the roundabouts, adding an area-appropriate touch to the landscaping of the project.