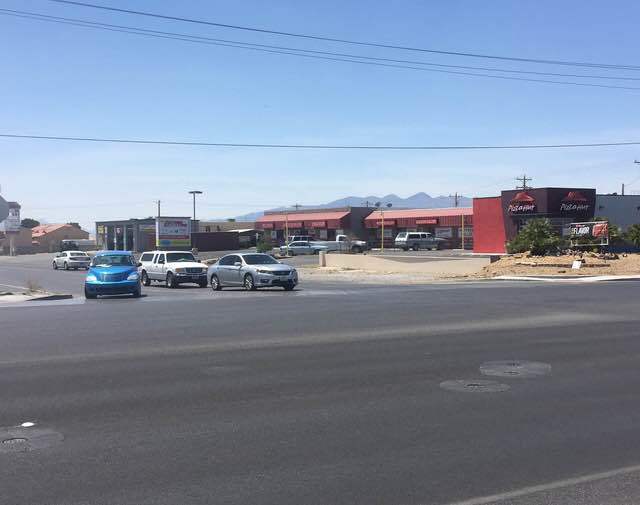 The Nevada Department of Transportation said that the Highway 372 roundabout plans are set to be finalized at a Sept. 12 transportation board meeting, setting up a late October groundbreaking for the $4.05 million project. Mick Akers/Pahrump Valley Times

After almost two years of planning and talks about a pair of roundabouts being constructed at two intersections of Highway 372, the construction phase of the contested project is set to begin in October.

The Nevada Department of Transportation, who named Las Vegas Paving the general contractor for the $4.05 million project last month, said the plans are expected to receive final approval at the Sept. 12 state transportation board meeting.

With that approval, NDOT said the groundbreaking for the Highway 372 roundabouts, one to be located at Blagg Road and the other at Pahrump Valley Boulevard, will take place in late October.

There will also be Cor-Ten steel art structures depicting wild horses, bighorn sheep and birds, adding an artistic element to the project.

In addition to the roundabout features themselves, NDOT will also create new sections of sidewalks, curbs and gutters, along with new handicap-accessible pedestrian crossings in each direction.

New street lights, signage and areas of asphalt and concrete paving with a fraction finishing course, which will allow vehicles to hug the road better, to prevent skidding, are also included in the plans.

The project is expected to take six months to complete, and will feature a sophisticated traffic plan with flaggers, night-time work and phased construction, while allowing continual access for emergency first responders.

The plan to allow easy access through the worksite should come as welcome news for the Nye County Sheriff’s Office and Pahrump Valley Fire and Rescue, as they let their concerns be known about possible safety hazards the roundabout construction could create, at the June 29 Capital Improvement Advisory Committee meeting.

Roundabouts are one-way circular intersections with a center island where traffic flows freely without stop signs or traffic lights.

According to NDOT, roundabouts are safer and more efficient than traditional four-way signalized intersections.

A roundabout has only eight points of potential conflict for vehicle collisions, whereas four-way signalized intersections have four times as many conflict points.

The reason comes from the flow of roundabout traffic, requiring vehicles to enter and exit using rights turns at reduced speeds.

NDOT plans on holding a free public workshop in the coming months that explains how to use roundabouts.

County support of the roundabouts was first approved by a slim 3-to-2 vote at the Sept. 2, 2014 commission meeting, and have drawn public concern ever since.