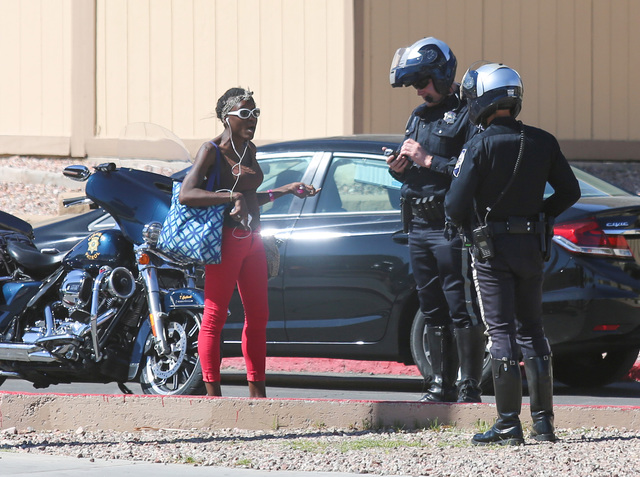 A pedestrian is stopped by Nevada Highway Patrol officers for jaywalking in Las Vegas. Nevada’s 465 uniformed patrol officers who deal directly with the public are on track to begin wearing body cameras by a January deadline. Brett Le Blanc/Special to the Pahrump Valley Times

CARSON CITY — Nevada Highway Patrol troopers soon will have another set of eyes on their interactions with the public.

Nevada’s 465 uniformed patrol officers who deal directly with the public are on track to begin wearing body cameras by a January deadline, joining Las Vegas police in the full use of the devices.

Requests for proposals by companies to provide the cameras to the NHP were submitted late last month, and the Nevada Board of Examiners is expected to award a contract for the devices, associated recording equipment and training in early December.

The cameras are required as a result of the passage of Senate Bill 111 during the 2015 legislative session.

Data storage is the biggest cost with body cameras, running as much as $1,000 a year per officer, depending on which system is used.

The bill by state Sens. Aaron Ford and Kelvin Atkinson, both Las Vegas Democrats, set aside $785,000 for the program in the first year and $475,000 in the second.

A report on the progress of the body camera program recently was made to a panel of lawmakers and state and local law enforcement, judicial and criminal justice representatives serving as the Advisory Commission on the Administration of Justice.

Col. Dennis Osborn, chief of the highway patrol, said body cameras will be an enhancement to dashboard cameras now in place on patrol vehicles. The two cameras will work in concert to provide a complete picture of an incident, he said.

Ford praised the work of the agency in moving quickly to implement the program.

“It was a great cooperative engagement that I had with the police officers, with the press association, with the ACLU, and I have heard nothing but great, positive things that the department is trying to do to get this implemented,” he said.

Ford said in his initial testimony that the bill was not a criticism of Nevada law enforcement officials, but instead a way to provide important evidence in cases of police shootings.

Atkinson echoed those comments in a March 2015 legislative hearing, saying the bill was not a referendum on law enforcement in Nevada.

“I think they do a fine job in our state,” he said. “But I do believe this provides some protections for not only law enforcement but for the individuals who are being arrested.”

Atkinson said private individuals are filming such incidents and it makes sense to generate footage from the officers involved.

Ford’s son, Aaron Ford II, testified for the original bill, asking members of the Senate Government Affairs Committee to think about individuals like him who want to be safe in their own communities.

“I feel that I shouldn’t be scared to walk home from my neighbor’s house after it gets dark,” he said.

The bill ultimately was amended to cover the highway patrol only at the end of the legislative session, primarily due to funding constraints.

At the September hearing on the NHP body camera effort, it was noted that some jurisdictions around the country are doing away with such programs because of data storage costs or large numbers of public records requests. But Nevada law enforcement officials say they don’t expect such problems.

Chuck Callaway, representing Las Vegas police on the panel, said Nevada limits records requests to specific incidents and does not permit blanket requests. Other jurisdictions had problems, he said, because a request would come in for every recording by a specific officer, for example.

Callaway said the Las Vegas department soon will have body cameras for all uniformed officers, along with SWAT and K-9 officers, as a result of an agreement with unions.

The 900 cameras now in use by Las Vegas police will probably double in the coming months.