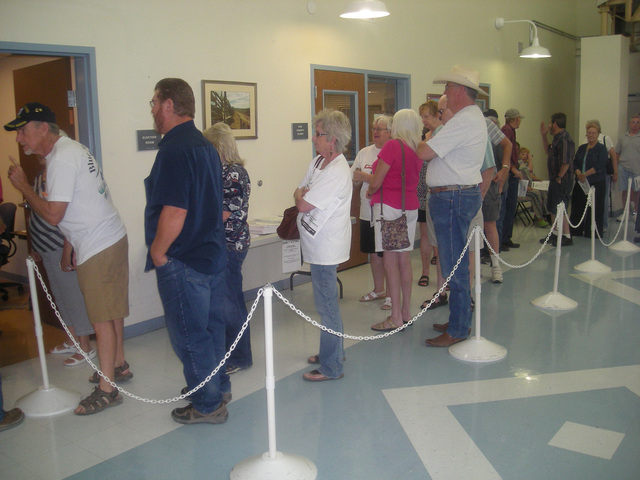 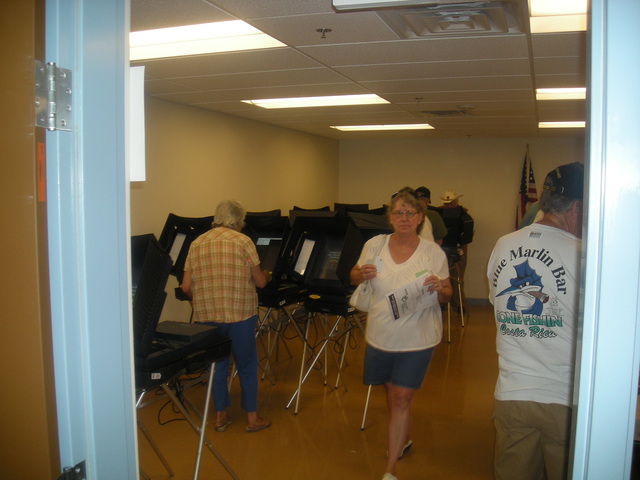 Turnout was slow on the first day of early voting Saturday at the Ian Deutch Government Complex on Basin Avenue, which an election worker blamed on the Memorial Day weekend.

Polls opened at 10 a.m. and people packed the lobby waiting to vote at the first opportunity when election workers came in but there was no line out the door. Nye County Clerk Sam Merlino said by 12:30 p.m. only 233 votes were cast.

“We usually do that by the first hour on the first day,” Merlino said. “The only issue is people showing up at J.G. Johnson and the Bob Ruud today.”

This year voters in Beatty and Round Mountain will have to vote by mail due to a shortage of election workers. They join residents in Forty Bar, just north of Pahrump and remote communities like Currant, Duckwater, Gabbs, Ione, Manhattan, Mercury, Big Smoky Valley and Sunnyside.

“They should realize that they’re only voting for their party,” she said.

Among the partisan races, all five candidates running for Nye County assessor are Republicans, all three candidates for public administrator, all four candidates running for Nye County District 4 commissioner and four of the six candidates running for District 5 commissioner. Democrat Bob Howard and Independent American Party candidate Rick Osborne aren’t on the ballot; in that race they go straight to the November general election. Fifth District Judge Robert Lane and his opponent Lillian Donohue go straight to the November ballot in a two-person race, so does Merlino, a Republican, and her Democratic opponent, former deputy clerk Sheila Winn. Nye County Treasurer Richard Billman and County Recorder Deborah Beatty are unopposed.

Just outside the courthouse, Kenny Bent and Alice Rhea were asking whether voters wanted to fill out a slip of paper listing their choices in an exit poll, and drop it inside a box. Bent said, “we’re just trying to make everybody content” over any concerns of election illegalities.

“In 2012 we got about 30 percent of the people to take it and we were within 1/10th of 1 percent (of the results),” Bent said, affirming his confidence in the system.

In the parking lot, members affiliated with the Concerned Citizens for a Safe Community had two tents set up, just outside the 100-foot buffer zone required between electioneering and the voting booths. At one booth, voters were asked to sign a petition to discontinue the Nevada Health Insurance Exchange, the state’s version of the Affordable Care Act, or Obamacare.

Copies of a grading report on the different candidates by the Nye County Republican Party Central Committee were also being handed out. The NCRCC endorsed Tea Party congressional candidate Niger Innis, Sue Lowden for lieutenant governor, State Sen. Barbara Cegavske for secretary of state and at a local level Angela Bello for district attorney, Galen Morgan for sheriff, Dave Caudle for District 5 commissioner, Shirley Matson’s re-election as assessor and Robin Dorand-Rudolf for public administrator. The scores for District 4 commissioner were too close and the NCRCC declined to endorse anyone. The group’s top two picks are incumbent Butch Borasky and his opponent Gary Bergman.

Another petition asked to recall four members of the Pahrump Town Board, though the board is scheduled to be dissolved at the end of this year. The Nevada Supreme Court rejected an appeal by the town of Pahrump that the county commission in scheduling the November 2012 vote didn’t spell out exactly how the town board form of government was not in the town’s best interests. Nye County commissioners will appoint Pahrump town board members who will serve as an advisory board, the county will be required to approve all expenditures.

When asked why there were individual petitions to recall Pahrump Town Board members Harley Kulkin, Bob Adams, Tom Waters and Bill Dolan but not Amy Riches, a volunteer said Riches agreed to step down when the board reverts to advisory board status.

Each petition heading reads: “These Pahrump town board members, one of them being named herein, subjected the Nye County Commission and Nye County clerk, plus the voters and taxpayers of the town of Pahrump to a very lengthy and very costly lawsuit of over $100,000 in legal fees, according to our Nye County district attorney. This present town board member does not represent the best interests of the town of Pahrump.”

When asked why they want to recall town board members who may not be serving anyway after Dec. 31, CCSC member Don Cox said, “If we get them out four months early, six months early, we’re going to save millions.” Cox cited as an example the recent town board purchase of a $229,000 fire truck.

People circulating the petition will have 90 days to collect signatures. If a sufficient number of signatures is turned in, it will take more time to check whether they are valid, putting any potential recall election well into the fall.