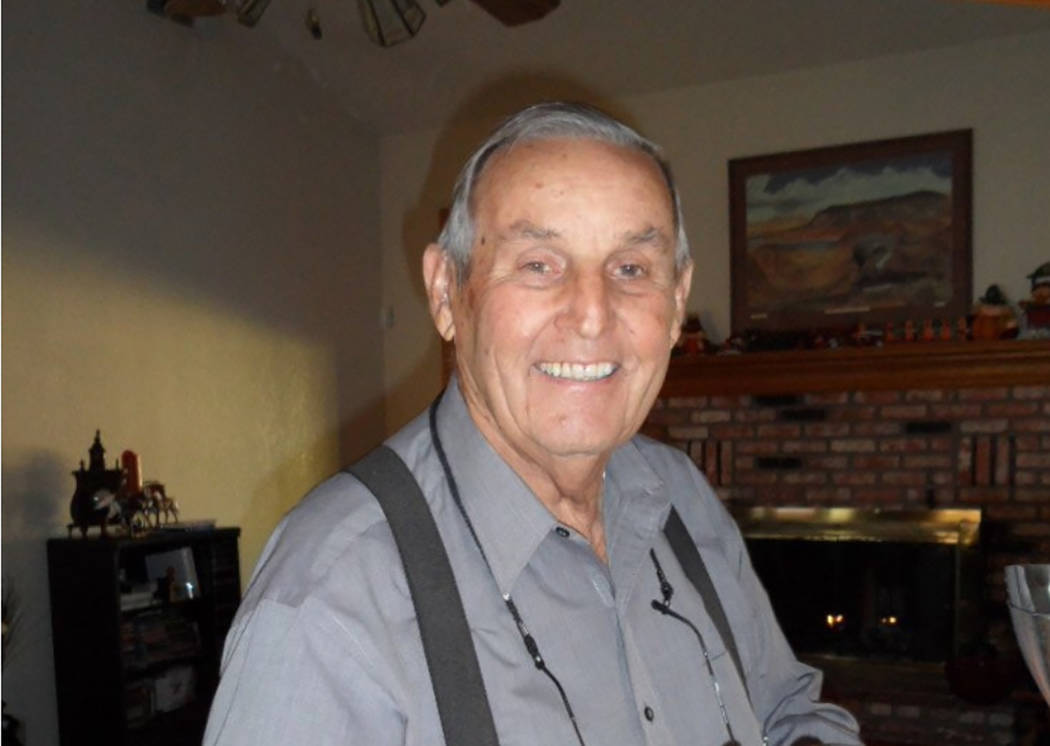 Submitted to the Pahrump Valley Times Hollis Harris has passed away 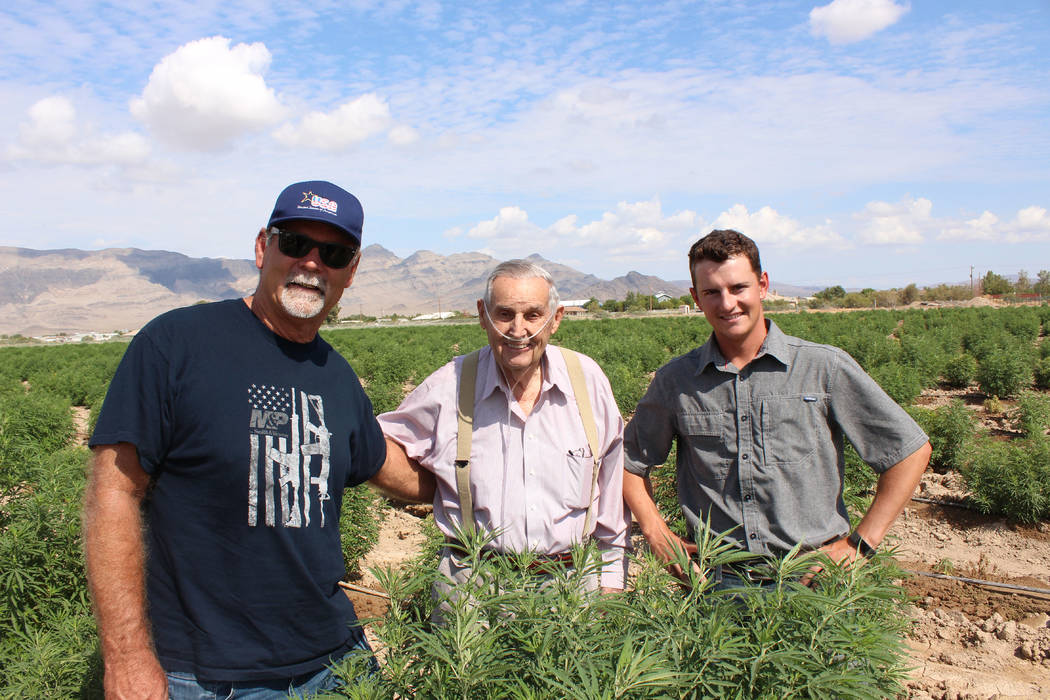 Jeffrey Meehan/Pahrump Valley Times Dan Harris, left and Hollis Harris, middle, stand at the family's 10-acre industrial hemp farm at Harris Farm and Blagg roads on July 25, 2017. Dan said his father, Hollis, was very pleased to have finally gotten back into his original passion, farming, and was able to enjoy it for a couple of years before passing away.

A longtime member of the Pahrump community, and one of the driving forces behind the development of the valley, Hollis Harris passed away earlier this month at age 87. He was well-known and well-loved by many and his son, Dan Harris, said his father will be greatly missed.

“Dad, he was a hard worker. He didn’t know anything different except to get up and go to work,” Dan told the Pahrump Valley Times shortly after his father’s passing. “He had a wonderful sense of humor, always had a smile on his face. He always spoke well of other people. People just kind of gravitated toward him, they liked to be around him. He’s going to be missed, he really is.”

Sharing some of Hollis’ history, Dan detailed that his father had a desire for farming and that was the dream that ultimately led his family to Pahrump, where they were to lay down deep roots over the following decades.

“His first passion was farming and he wanted to have a chance to maybe own some land of his own,” Dan recalled. “So he worked for a big farming operation out of Fresno, California and was a bookkeeper and they decided they wanted to expand their farming operations into Nevada. They asked Dad and Mom if they’d like to move to Pahrump. Dad didn’t hesitate, he wanted the chance to farm and maybe someday have his own farm.”

That was in 1963 when the population of Pahrump was under 300, Dan stated. His father worked for that farming operation for several years, before branching out on his own. However, it turned out that farming was not quite as easy in Pahrump as it was in the San Joaquin Valley and as a result, Hollis found himself in an unexpected area of business, real estate.

“Dad tells a story that he wasn’t the best farmer in town, he thought the Hafens and the Bowmans and Bob Ruud were better at it than he was but he had to find a way to survive. So he got into real estate, developing different subdivisions around town,” Dan explained, citing such developments as Thousandaire Estates and Desert Trails, among others. “He did that to survive, because farming, it just wasn’t working.”

The industry Hollis fell into allowed him future opportunities as well as the chance to take care of his family, and he was able to aid the community as a whole, something Dan said was a true calling for his father.

“He loved Pahrump and he saw the needs here and he tried to help fill them. For example, Pahrump always needed a hospital and Dad and Mom figured out a way to get involved with trying to find a spot for the hospital and ended up eventually donating the land, just giving it to them,” Dan reminisced. “He wanted to build a medical community down there and the next step was the VA Clinic, helping bring that to the valley. That was a five-year project, believe it or not. And then helping out on the new HealthCare Partners building off of Loop Road, he was instrumental in putting that together. He saw a need in Pahrump and he would set about trying to solve it, fix it. We needed a grocery store and he helped bring it. He built the Horizon Markets because he saw the need for them. He loved this town and he was a big part of it.”

Dan said his father was never one to “toot his own horn” but he certainly made a large enough impact in the community that he leaves behind a vast legacy.

“He has always loved Pahrump, from day one, even when there was nothing here!” Dan concluded. “He wanted to help build Pahrump, bring in things the town needed. The main thing in his heart was that he loved this place and if everyone can all remember to love Pahrump as much as he did, we’ll be in a better community.”

A celebration of life will be held at 10 a.m. on Saturday, Feb. 2 at the Pahrump Community Church, 1061 E. Wilson Road in Pahrump. In lieu of flowers, donations in Hollis’ name can be made to Nathan Adelson Hospice.