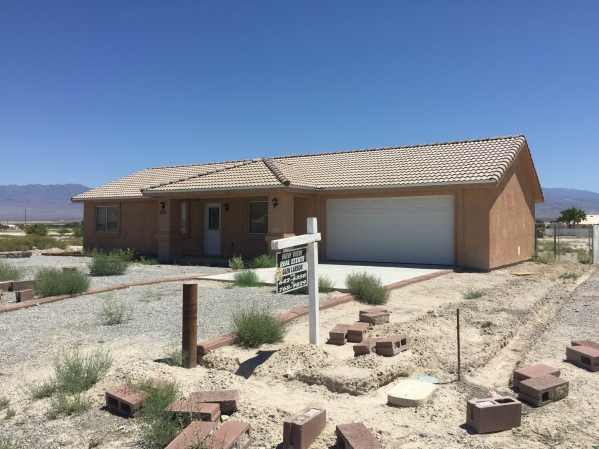 As the economy continues to recover from the economic downturn of 2008, real estate in Pahrump is following suit.

Through the first six months of 2015 the number of units sold and the amount those sold for have risen compared to the same time last year.

Despite there being just two more units being sold this year than last, there was an 8.1 percent increase in value due to higher home prices.

This is a trend that local realtor and owner of All Star Real Estate, Cathy Slaughterback, said has been steadily taking place over the past few years.

Norma Jean Opatik of Realty Executives, has been a realtor in town since 2002, agrees with the steady increase and said it’s close to the perfect scenario.

“It is slow, but gradual, but that’s what we need,” Opatik said. “We don’t need a quick increase in prices and sales at this point, because that just creates another bubble.”

Although the number of homes sold was higher in 2009, which was due to the lower prices, the total revenue wasn’t too far off considering the 18-home sales difference.

Opatik said the numbers reflect the market continuing to gain traction since the bubble burst.

“In my estimation we’re healthy,” Opatik said. “We’re not fully recovered, but we’re healthy at this point. A lot of people can now move. They can now sell their homes and actually get a little bit of a profit.”

The trend of homes going up in price is something that Slaughterback sees continuing for the foreseeable future.

“I’ve heard it’s going to keep going up,” she said. “I wish I had a crystal ball, but I think we’re just going to do a slow climb. I don’t see a big rush then a fall down again. I think we’ll stay kind of consistent. Nothing really hot, but everything is kind of moving.”

Opatik agrees with Slaughterback on the price trend continuing to slowly rise and that most homeowners are in good shape to make a little return on their investments.

First-time home buyers are the majority of the home buyers Slaughterback has seen recently, which are a slightly older age than what she was used to seeing.

Slaughterback said she thinks with prices in Las Vegas going up at a much faster pace than Pahrump, some of the residents from over the hump are migrating over to get more house for their money.

“I don’t see it happening,” Slaughterback said. “They say it hits every 25 years, but I think it’s going to take closer to 30-plus years. I don’t know if we’ll ever see prices like that again.”

Opatik agreed with the prices not reaching 2007 levels and said that she doesn’t think they need to get that high again.

“No, and we don’t need it back there,” she said. “We don’t need the prices back in the bubble. We need a three to five percent appreciation rate happening on an annual basis and that will keep us healthy.”