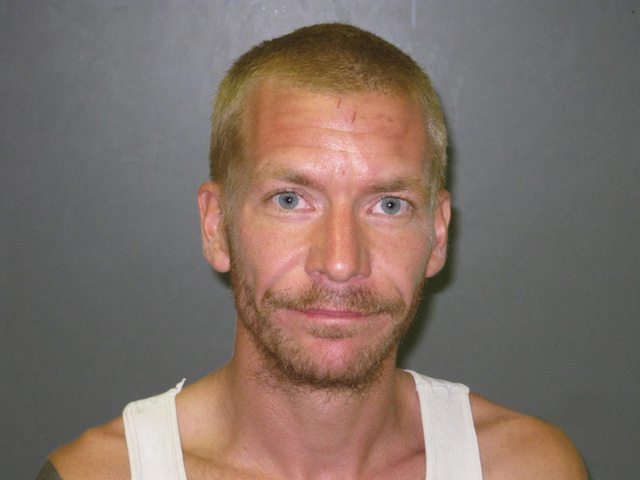 A man charged with voluntary manslaughter in the death of his neighbor in a homeless encampment earlier this year was sentenced to a maximum of 10 years in prison.

Peter Helfrich, 36, appeared in District Court Monday morning for a sentencing hearing. He pleaded guilty pursuant to Alford in August; that’s a plea defendants sometimes use in place of a guilty plea when they do not necessarily wish to admit guilt in a case, but realize the state has enough evidence to convict them.

Helfrich was originally charged with first-degree murder and destroying or concealing evidence after he reportedly admitted to killing his neighbor Salvador Zuno-Gama on Jan. 23 by striking him multiple times in the head with a metal baseball bat before dumping the man’s body in the desert with the help of his girlfriend and co-defendant Silvia Castillo.

Helfrich said he killed Zuno-Gama in self-defense after the man allegedly attempted to attack him with a large hunting knife.

The charges were later reduced to voluntary manslaughter after Helfrich agreed to take a plea deal.

Helfrich was arrested after Nye County Sheriff’s deputies were called to a local RV park for a report of a possible suicide threat on Jan. 24. When they arrived, they met with a visibly upset Helfrich who reportedly told the officers he “didn’t want to live because he had done a terrible thing.”

The man then went on to tell police he and Zuno-Gama had been drinking at his trailer when Zuno-Gama allegedly told Helfrich there was a “hit” out on the man’s life and that he was going to kill him for money.

Helfrich reportedly told police the victim then came at him with the knife.

After Helfrich said he tried several times to subdue the other man, by allegedly spraying him with bug spray, pepper spray and shooting him with a crossbow, with no success, he then picked up a metal bat and struck Zuno-Gama several times killing him.

Helfrich and Castillo then drove the body seven miles to Wheeler Pass and dumped it in Clark County before burning some of the evidence back at their trailer.

Before the sentencing hearing, Helfrich and his court appointed attorney Alan Buttell made a motion to have Judge Robert Lane remove himself from handling the sentencing as they believed there could be a possible conflict of interest.

Helfrich filed a lawsuit in federal court last year naming Lane and more than a dozen other Nye County officials as defendants. That case was ultimately dismissed. Lane denied the motion to recuse himself.

Buttell argued that Helfrich should receive probation in the case.

He added that Helfrich is known to many in the community as sort of an odd-ball character and that he has had run-ins with local law enforcement. This was the reason that Helfrich decided to dump Zuno-Gama’s body in the desert rather than call police.

Buttell added that the only reason his client pleaded guilty was a chance a jury could find him guilty of first-degree murder.

Prosecutors asked the judge to hand down the maximum penalty.

“The facts we know here are that he killed a man, his neighbor, hitting him with a bat, cracking his skull. That man is killed and the defendant convinces Silvia to help him dump the body. They wipe down the car and dump the body in another county and burn the evidence back at his site in the desert. Those are not the actions of an innocent man,” Deputy District Attorney David Rickert said.

When given the chance to speak, Helfrich became emotional and began crying as he apologized, teling Lane he was afraid not only for his own safety at the time of the incident, but for that of his girlfriend and unborn child.

“I was so afraid at the time that I made a bad situation worse. I’m sorry and if I had a time machine I would go back and change it, but we don’t have time machines. I have a daughter out there and that’s all I can think of. She’s a few months old now and she’s all I could think of,” Helfrich said.

Lane eventually handed down the maximum prison term based on the evidence presented in the case and despite Helfrich’s plea for probation.