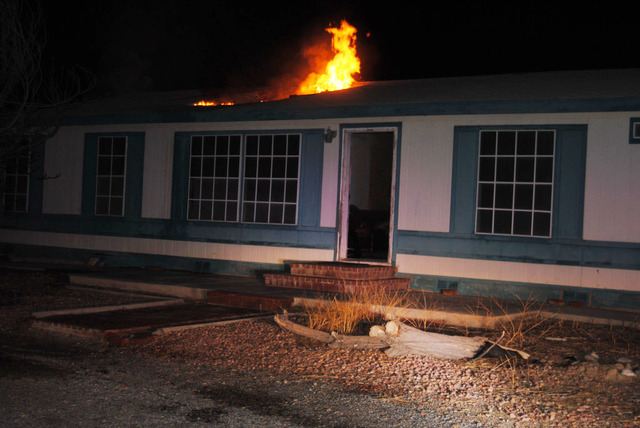 A Pahrump man was arrested after his home caught on fire and fire officials discovered an alleged marijuana grow house which had nearly 200 plants inside. Special to the Pahrump Valley Times

A Pahrump man was arrested after his home caught on fire and fire officials discovered an alleged marijuana grow house which had nearly 200 plants inside.

Robert Arnold, 66, was taken into custody by the Nye County Sheriff’s Office Thursday and charged with preliminary counts of maintaining place for sale, gift, or use of controlled substance; unlawful to produce or process marijuana; and unlawful possession for sale of Schedule I controlled substance.

On Dec. 29 Pahrump Valley Fire and Rescue responded to a home on the 2600 block of East Idlewild Street for a reported structure fire.

As the firefighters went inside to fight the blaze they discovered a portion of the home that housed multiple potted plants that appeared to be marijuana. After the discovery of the plants, the sheriff’s office was called to investigate.

Upon arrival to the scene, deputies spoke with Arnold, the sole resident of the home. He stated that there were about 60 marijuana plants within the residence, that he claimed to use for medicinal purposes.

Arnold gave the sheriff’s office permission to remove the marijuana plants from the residence.

Deputies removed 181 marijuana plants in various stages of growth. Samples were taken from the plants in each room to be submitted for testing. The remaining plants were booked into the sheriff’s office evidence vault to be disposed of.