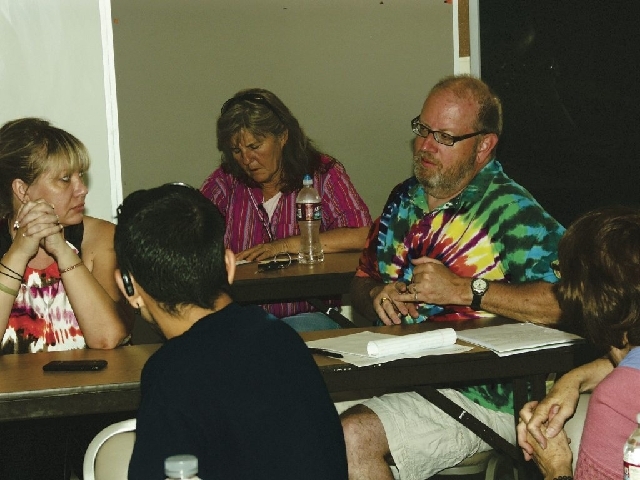 Officials from Las Vegas’ AmeriCorps organization met with their local counterparts to forge an initial plan of action on how to get those services to those who need them most.

Local AmeriCorps Service Representative John Pawlak said Pahrump’s veterans truly need what Las Vegas veterans have been benefiting from for many years in what is known as the “Veterans Stand Down.”

“It consists of bringing services they are not able to get on their own. They can get medical where they can get checked out and advise them how to best take care of their issues. There’s also a dental mobile unit. The veterans could also get clothing from the Stand Down and a few businesses were there to provide possible job opportunities. Sometimes veterans have some legal issues that otherwise may prevent them getting a job, so there were legal representatives on hand to offer help on that,” he said.

Pahrump has in the past sponsored the Stand Down for veterans, but Pawlak said those are not on any sort of regular schedule.

“We want to get those services out here on a regular basis. We have had those before but they have not been as successful as the ones in Las Vegas,” he said.

Another important aspect of the service is to provide housing assistance for veterans who do not have a home.

Pawlak said efforts are in the planning stages for transitional housing for local vets who are homeless.

He said obtaining grants will be the most important factor in getting the effort off the ground.

“There are a whole bunch of veterans who are out there with no suitable place to call home. They live in tents and old broken down RVs. Why not try and get them a better place to live,” he said.

One local veteran who falls under the homeless category is Dwight Orndorff.

The 73-year-old Vietnam veteran’s current home is a tent in the desert on the valley’s northeast end of town.

Orndorff, who has been in and out of VA hospitals due to exposure to the chemical defoliant “Agent Orange,” suggested that additional doctors are what Pahrump’s veteran population needs most next to housing.

“We need more doctors for veterans out here. I live in a tent and sometimes it’s a little hot but I’m used to it. Sometimes the vets will help each other out but I have been taken advantage of before,” he said.

Pawlak, meanwhile, who is also a Vietnam veteran said that vets returning home from combat zones are not properly prepared for the return to the lifestyle they once knew at home.

He noted that the VA should do more to help them make the adjustment.

“Post-Traumatic Stress Disorder (PTSD) has been officially recognized as well as Traumatic Brain Injury (TBI) and that is what was showing up in Iraq and Afghanistan when those charges on the side of the road are blown up. Basically it rattles your brain around in your helmet and that causes all kinds of physical and mental problems,” he said.

Pawlak also mentioned a startling statistic among many veterans who have served during wartime and returned home without proper emotional therapy stateside.

“The suicide rate among veterans is now 22 a day, which is almost about one each hour. It’s terrible and I can talk for hours about the different reasons, but you are not necessarily the same person when you come back,” he said.

Pawlak spoke on a personal level about his own emotional issues after returning home from his tour of duty decades ago.

“I didn’t see a lot of blood and gore but I may have killed through the job I was performing at the time. It could have been one person or maybe a thousand. I never got any kind of intelligence on it and I never had the stigma of knowing or seeing the end result of what I did and maybe that is what saved me,” he said.

The Vietnam veteran also said that too many soldiers who return home after serving overseas receive medical treatment that may exacerbate their condition.

“Another problem is ‘pilling them up’ as I call it. Some doctors have a habit of just plying them with pills. I’m not trying to say anything bad against the local providers, but this is what I have seen in the past and it’s not the best thing to do for these patients. That’s why we are coming together with other veteran assistance groups in Las Vegas. There are other alternatives than just relying only on different drugs and medications,” he said.

Pawlak noted that this recent effort to assist veterans will also extend to communities between the Town of Pahrump and Las Vegas.

“The local DAV is reaching out to our friends in Tecopa, where we have servicemen and woman living out there. They are not forgotten but it’s hard to reach them from Inyo County because they are at the end of the road and it takes a couple of hours to get to them. We are just 45 minutes away from them. We want to provide them with the services that they need especially providing transportation to get them to their appointments wherever they may be,” he said.

For information on services provided to local veterans from the DAV contact service officer. Bob Hammond at 537-5146.