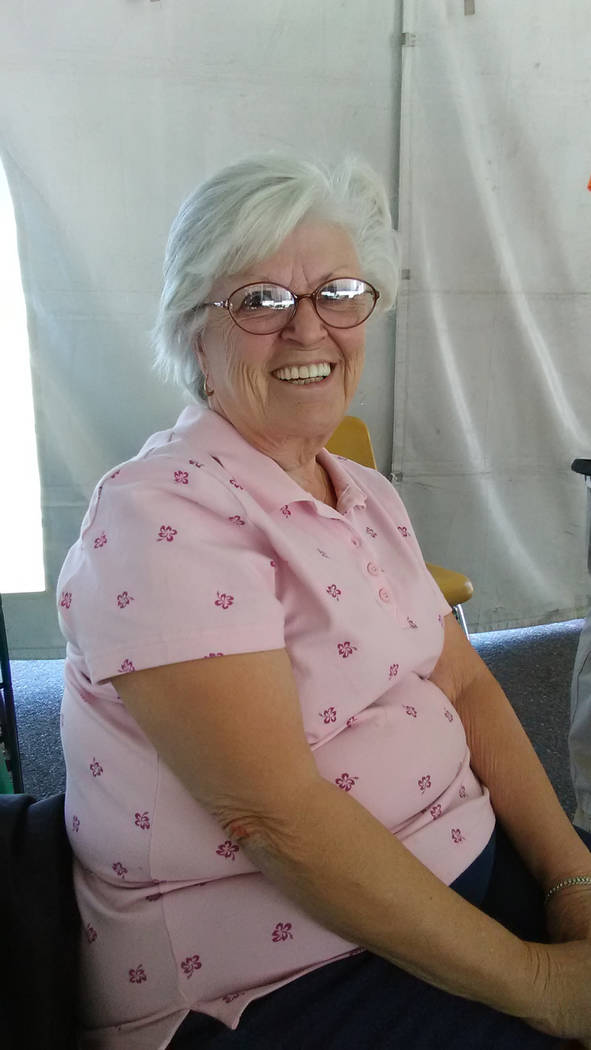 Selwyn Harris/Pahrump Valley Times Pahrump resident Cynthia Powell sports a brand new pair of eyeglass, courtesy of the weekend’s Remote Area Medical (RAM) event at NyE Communities Coalition. At one time, Powell had full-coverage on her insurance, but as time went on, she said she her vision and dental care. “This has been a life saver for me,” she noted. 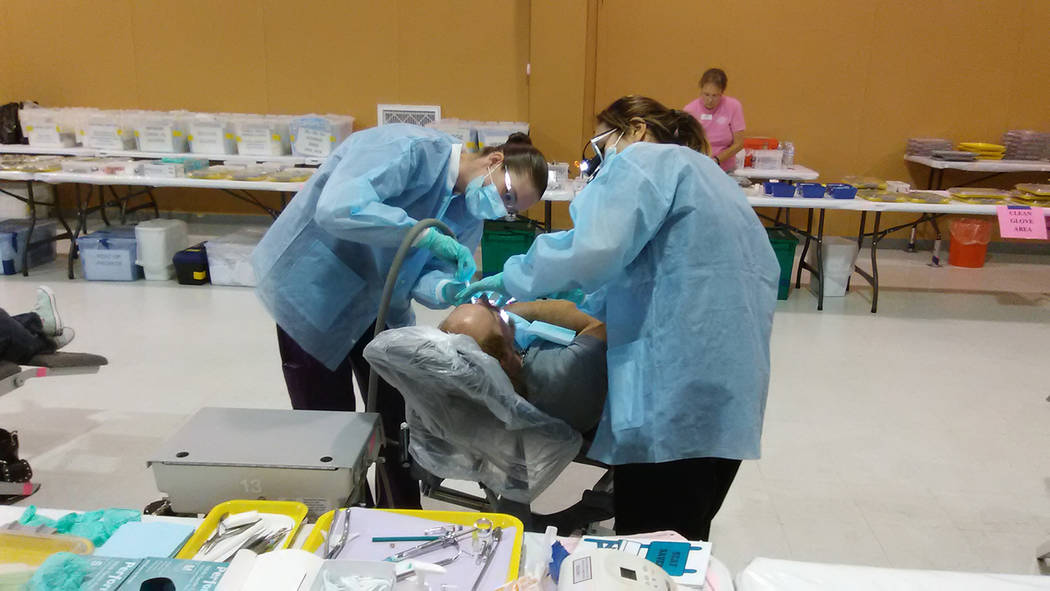 Selwyn Harris/Pahrump Valley Times Two dental professionals conduct an exam on a patient on Saturday. The weekend’s RAM event served more than 450 local individuals and families, at a cost of $132,399 in medical care services. 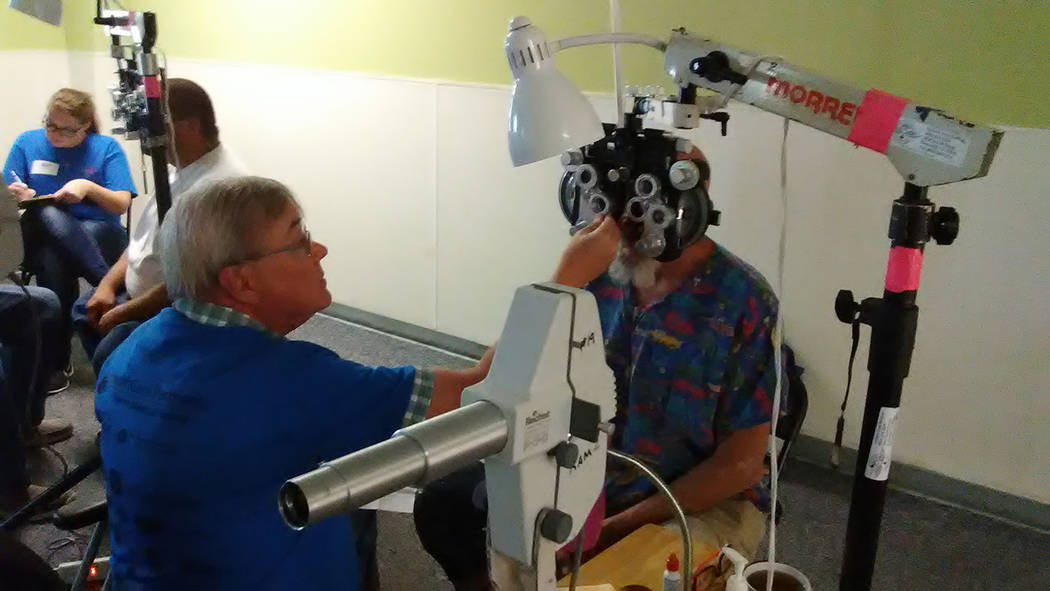 Selwyn Harris/Pahrump Valley Times A Pahrump man undergoes an eye exam at the Remote Area Medical event on Saturday. Patients did not have to pay for their respective medical services during the three-day event which began on Thursday Oct. 5.

Hundreds of area residents took advantage of free medical services over the weekend, as medical professionals from Remote Area Medical, arrived in Pahrump.

The organization is described as a nonprofit medical care group providing free vision, dental, and other general medical services to people in communities throughout the U.S., and overseas.

Ryan Muccio, co-chairman of the RAM event, spoke about the large number of individuals and families who attended this year.

“We had a very, very large turnout over the weekend,” he said. “It was fantastic and we actually served more patients than last year, I believe, by about 20 people. This year, we served 452 patients, and it was a total of $132,399 in medical care services that were provided. It is very exciting because it is growing each year it seems.”

The event provided for a very long weekend for both volunteers and medical professionals.

Muccio noted that even though the gates opened at 6 a.m. on Friday, there were individuals who were lining up at the site many hours prior to the opening.

“We actually had someone lining up as early as 2 p.m. on Thursday, to prepare for Friday, so essentially, our first patient was there at 2 p.m. Most people began to line up between 10 p.m. and 3 a.m. on Thursday. The tickets were distributed at 5 a.m. and of course, the gates opened at 6 a.m.”

Powell said she was in need of new eyeglasses.

“I think this is a wonderful event,” she said while sporting her newly acquired eyewear. “My glasses are fabulous and they are processing people just as fast as they can. Considering what they’re doing, in one day, no ophthalmologist or doctor’s office can do this, because you will be there for at least three hours anyway.”

Powell also talked about the importance of such an event.

“There was a time when I had full coverage on my insurance, but as time went on, I lost my vision care and I lost my dental care,” she said. “I just have medical now. This has been a lifesaver for me. My glasses with bifocals can cost several hundred dollars, even for an inexpensive frame and not the lenses. That doesn’t count the office visits.”

Muccio also spoke about the many volunteers who lent their respective support throughout the entire weekend.

“The event was very well organized and it took a total of 150 volunteers to provide the services,” he said. “This is our second year, so we learned from our mistakes last year and we were able to correct those this year. It took our committee about six months to plan everything this year, and put it all together.

“Of course the RAM staff regularly travels just about every weekend, providing those services, so there have their processes down and they know exactly what they are doing,” Muccio said. “Between our planning and their planning, it all comes together quite nicely.”

Additionally, Muccio mentioned the importance of the event in relation to rural communities such as Pahrump.

“To a rural community such as ours, these services are crucial,” he said. “It is sad to say, but a large population within our county and town are uninsured or underinsured. Access to health care here is very limited, as many of us know. Many times we have to travel to Las Vegas for a lot of medical services and specialists.”

“I thought it was great to be able to bring specialists into Pahrump. We had a podiatrist, we had an infectious disease doctor, and OB/GYN professionals, so we were able to have these services right here for people to take advantage of their services,” Muccio said.

Though Muccio and staff were pleased with the overall success of the event, he did note there was at least one element, which fell slightly short this year, while confirming RAM will return again next year.

“Our goal is to have quite a few more dentists on hand to provide their respective services,” he said. “We kind of struggled this year in locating dentists who would provide their services. We are working with the UNLV School of Dentistry, as well as a couple of other universities and doctors who can help us bring more dentists out here. Our goal is to have at least 30 dental chairs here next year, which will triple the amount of people who will be able to receive dental care.”

Regarding next year, Muccio said he and the committee do not foresee any drastic changes in regard to the RAM event.

“I’m excited to say that we have a confirmation that they will return next year,” he said. “It is not typical for that organization to travel to the same location more than once, because their demand is so great. They truly enjoyed coming to Pahrump. They also enjoyed the appreciation from the patients and community, so they will return for a third year next year. Access to health care is limited here as most of us know. Many times we have to travel to Las Vegas for a lot of medical services and specialists.”

On a final note, Muccio said he and his colleagues endured a long, but rewarding weekend while serving the community.

“We are all tired,” he said. “We started at 3 a.m. and usually for some of us, didn’t get finished until 10 or 11 p.m., so it makes for a long day with the long hours but it is totally worth it and very rewarding.”