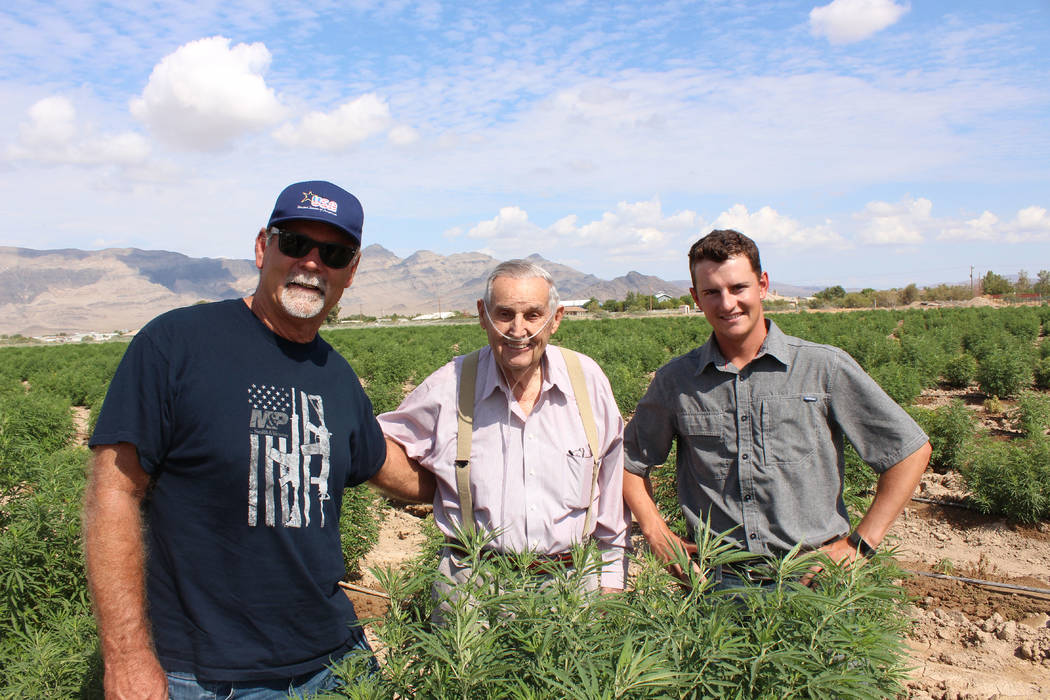 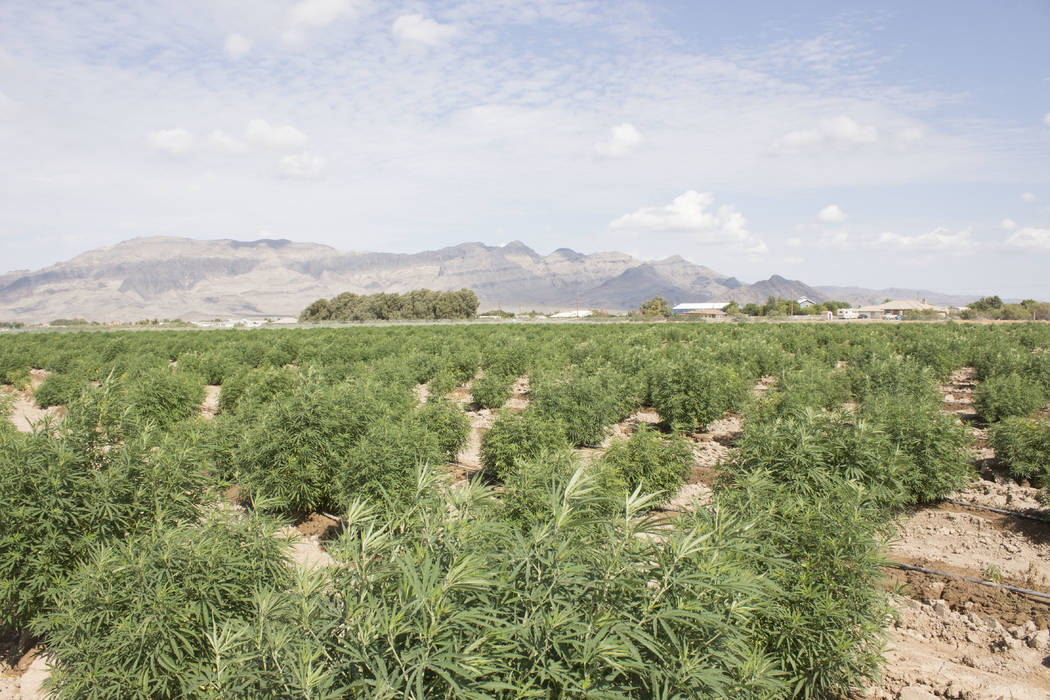 Jeffrey Meehan/Pahrump Valley Times The 10-acre industrial hemp farm at Harris Farm and Blagg roads, which is pegged to see its first harvest in mid-September. The farm is owned and operated by Dan and Hollis Harris under the Nevada Department of Agriculture's pilot program.

The owners of a Pahrump family farm are taking advantage of what could become a bustling industry in the local area and the state.

Dan Harris, along with his father, Hollis, are nearing harvest on their inaugural crop of industrial hemp—which has little THC, the psychoactive compound that gives marijuana users a high. The Harris’ are growing on 10 acres near Harris Farm and North Blagg roads.

“We’ve got probably half a dozen buyers that are interested in the product,” said Dan Harris.

The Harris’ are after the cannabidiol in the hemp plant, which is nonpsychoactive or won’t cause a high, to produce CBD oil. The oil is often used for medicinal reasons: as an anticonvulsant, antioxidant and an anti-inflammatory, just to name a few.

Under a new state law passed during the 2017 legislative session, hemp farmers around the area and the state could soon be a major source for CBD oils heading to the shelves of marijuana dispensaries in Nevada.

Senate Bill 396, signed by Gov. Brian Sandoval earlier this year, opens the door for hemp farmers in the state to sell to marijuana dispensaries around Nevada.

Regulations are still being drafted but are expected to be in place by Jan. 1, 2018, said Russell Wilhelm, industrial hemp program manager for the Nevada Department of Agriculture, which oversees the state’s growing efforts.

The legislation follows the passage of laws on the state and federal level that allowed hemp to be grown in the Nevada for research purposes.

In 2014, U.S. Farm Bill Section 7606 was passed by Congress and signed by then-President Barack Obama. The passage made way for states to allow for the growing of hemp for research purposes through universities or a state’s department of agriculture.

This could be through one of two ways at the state level: through an agricultural pilot program or other agricultural or academic research, according to information on the National Conference of State Legislators website.

The hemp must also not contain more than 0.3 percent THC, or it will have to be destroyed.

Under the guise of federal legislation, Nevada lawmakers passed Senate Bill 305 during the 2015 legislative session, giving the green light to the state department of agriculture to implement a research-based program.

Since that time, the number of hemp growers has gone up locally, Wilhelm said.

In 2016, Pahrump had four acres of approved land to grow industrial hemp on. All four acres were also planted last year.

That number jumped to an approved 72.5 acres of land that farmers can grow hemp on in Pahrump. The state department of agriculture tracks numbers by approved acreage and acreage that was planted on.

Nye County as a whole saw growth in the number of acres being grown on. In 2016, the county had 59 approved acres and farmers planted on all 59 acres for four growers.

In 2017, the county numbers went up to 192 approved, though only 134 acres had been planted on, according to Wilhelm.

At the state level in 2016, which registered 11 growers, approved and planted acreage was 319 and 229, respectively.

Wilhelm said the state’s agriculture department is still accepting applications for new growers, and there is no limit on the number of growers allowed in the state.

Dan Harris said he isn’t sure about his own expansion at this point, though his family owns over 500 acres in the Pahrump area.

Harris said his father, Hollis, came to Pahrump in 1963 after a large farming outfit he was working for in California decided to begin farming in Nevada. He bought the 10-acre field in the mid-70s.

But the family has also done other things, such as land development for housing projects such as Desert Trails in Pahrump.

The family has grown many things on the land in the past: alfalfa, sugar beets for seed and mint.

“We’ve tried a lot of different things on the ranch. Hopefully, this hemp crop will do pretty good,” Harris said.

So far, everything was looking good to Harris.

The first part of the crop is expected to be harvested in mid-September, with some the remainder being harvested in October, he said.

The fields were planted at different times, and the plants are fully grown at about 120 days.

Hemp is a seasonal crop.

“These plants respond to the light cycles, so as the days start to get shorter, that’s what triggers them to go to flower,” said Warren Jessop, who helps with cultivation and growing efforts at the Harris’ hemp farm. “You can’t grow through the winter because in that stage, they would think it was time to go to flower, when it’s really time to grow.”

After the crop is ready and picked, the plants are sent to dry and processed further to get ready for sale.

Wilhelm said 15 days prior to the day of harvest, the farmers are required to submit a harvest report.

“Once they do that, that will initiate my inspection to go out to the field and survey the crop and extract samples,” Wilhelm said.

If any part of the crop exceeds the 0.3 percent THC level, it will be destroyed.

If a crop is far beyond the 0.3 percent limit, the entire crop might be ordered destroyed by the state’s agriculture department. If it’s slightly past, the field could be slated for re-inspection.

Wilhelm described a scenario of 120-acre field, which would be broken down into four 30-acre plots. If the three areas not already tested passed inspection, those would be harvested.

If the section that failed the initial inspection didn’t pass on the second round, that part of the field would be ordered destroyed.

The state has no security requirements for growers.

“It’s all up to the producer to maintain their own security source,” Wilhelm said.

Harris doesn’t see any danger with leaving the crop unsecured, though he put fencing up to keep animals out.

“There’s no reason for anyone to be out here,” Harris said. “There’s no value to the crop for anything other than what we’re going to use it for.”