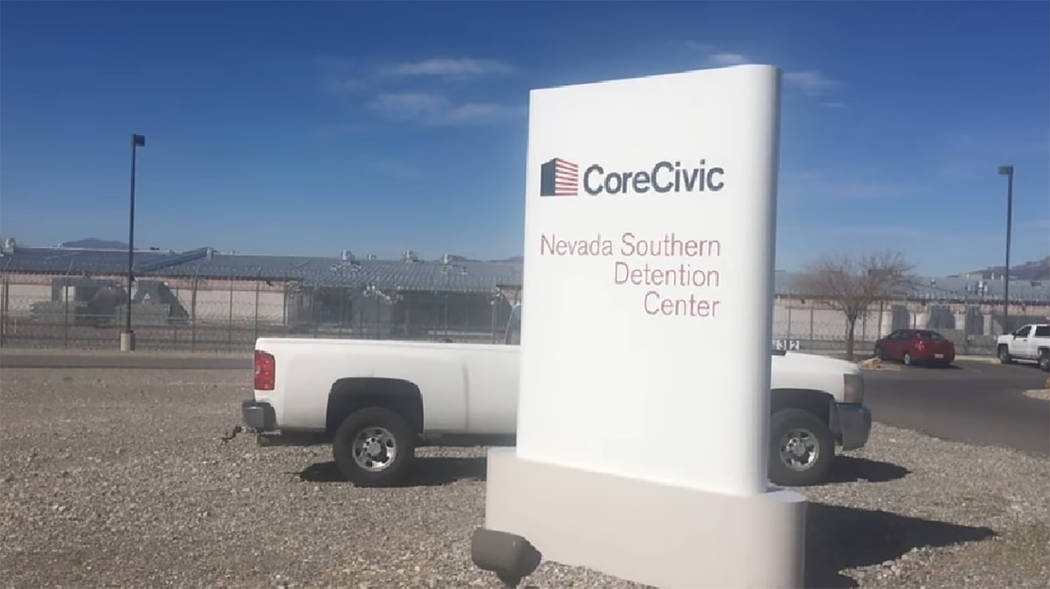 The Nye County Sheriff’s Office and two federal law enforcement agencies are investigating what is being described as a homicide at the CoreCivic Nevada Southern Detention Center.

As stated in a video news release, Public Information Officer Ann Horak said sheriff’s deputies were summoned to the facility at 2190 East Mesquite Road on July 12, to investigate the death.

“An inmate was found deceased at the facility in the early morning hours,” Horak said Monday. “The FBI and the U.S. Marshals are assisting in the investigation, as both the victim and suspect were being held on federal charges. The suspect is still in custody at CoreCivic. Additional information will be released as the investigation continues.”

On Tuesday, the victim was identified by the Nye County Sheriff’s Office as Frank Tocci.

The suspect was identified by the sheriff’s office as Wyatt Peterson, who remains in custody at CoreCivic.

The cause of death was identified as strangulation and the manner of death homicide, the sheriff’s office said.

The inmate killed at the private detention center in Pahrump was allegedly strangled to death by a co-defendant in a federal case, in which the two were accused of assault on a federal officer, the Las Vegas Review-Journal reported Tuesday.

Federal court records show Peterson and Tocci were two of three co-defendants in the federal assault case, and both had pleaded not guilty, the Review-Journal reported.

Their jury trial was set to begin Nov. 18, according to the records, the newspaper said, adding that no other details regarding the case were immediately available.

The investigation is continuing.

When contacted last week, CoreCivic Warden Brian Koehn said the facility was put on lockdown after the inmate was found unconscious in a secured cell early Friday at 4:05 a.m.

“A medical emergency was called and staff initiated life-saving measures,” Koehn noted. “EMS was called to the facility and the detainee was transported by EMS to an outside hospital where he was pronounced deceased at 4:49 a.m. Our partners at the United States Marshals Service were immediately notified. Nye County Sheriff’s Office responded and an investigation into the death is underway.”

Additionally, CoreCivic Public Information Officer Kayla Gieni did not say whether the incident was captured on surveillance footage, nor did she disclose what charges both inmates were being held on.