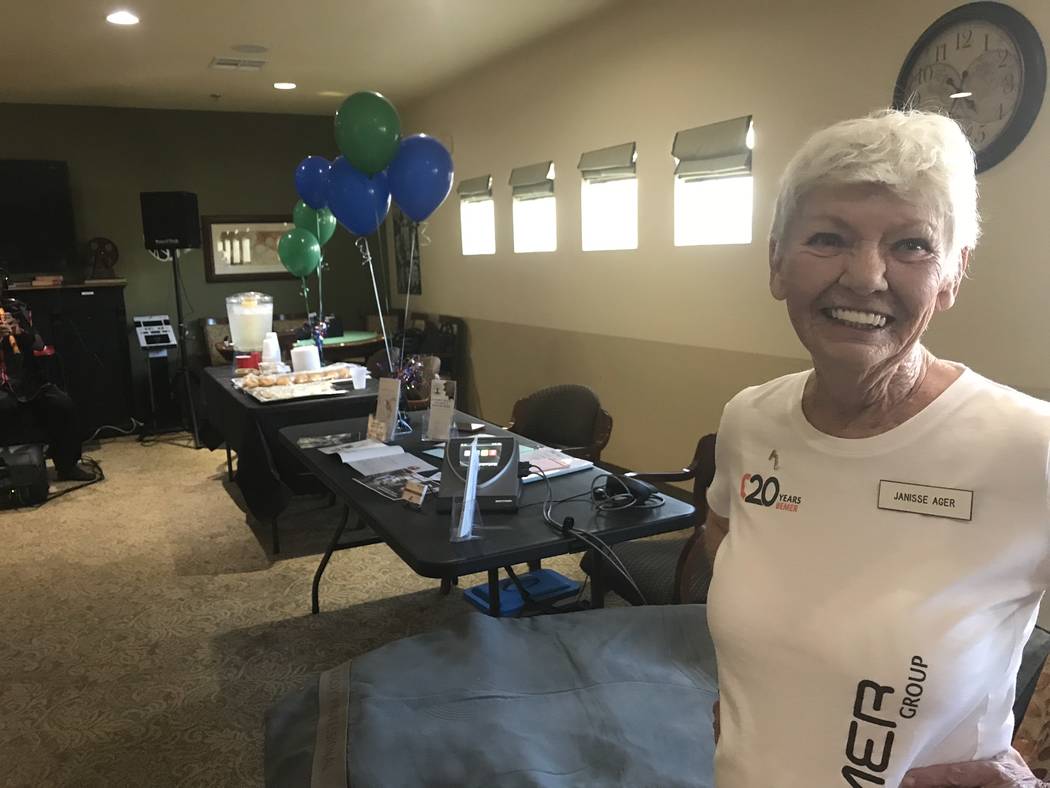 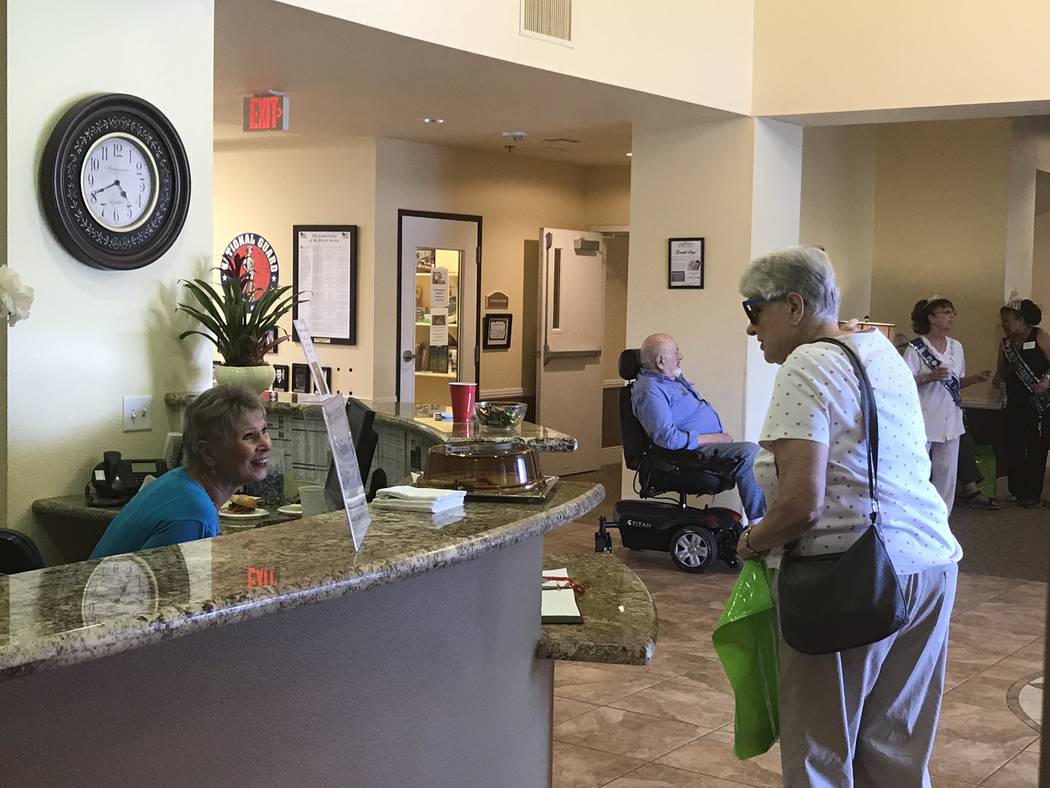 Jeffrey Meehan/Pahrump Valley Times Attendees of an open house event at Inspirations Senior Living in Pahrump check in for the three-hour long gathering on July 19, 2018. Several dozen people showed in just the early hours of the affair. 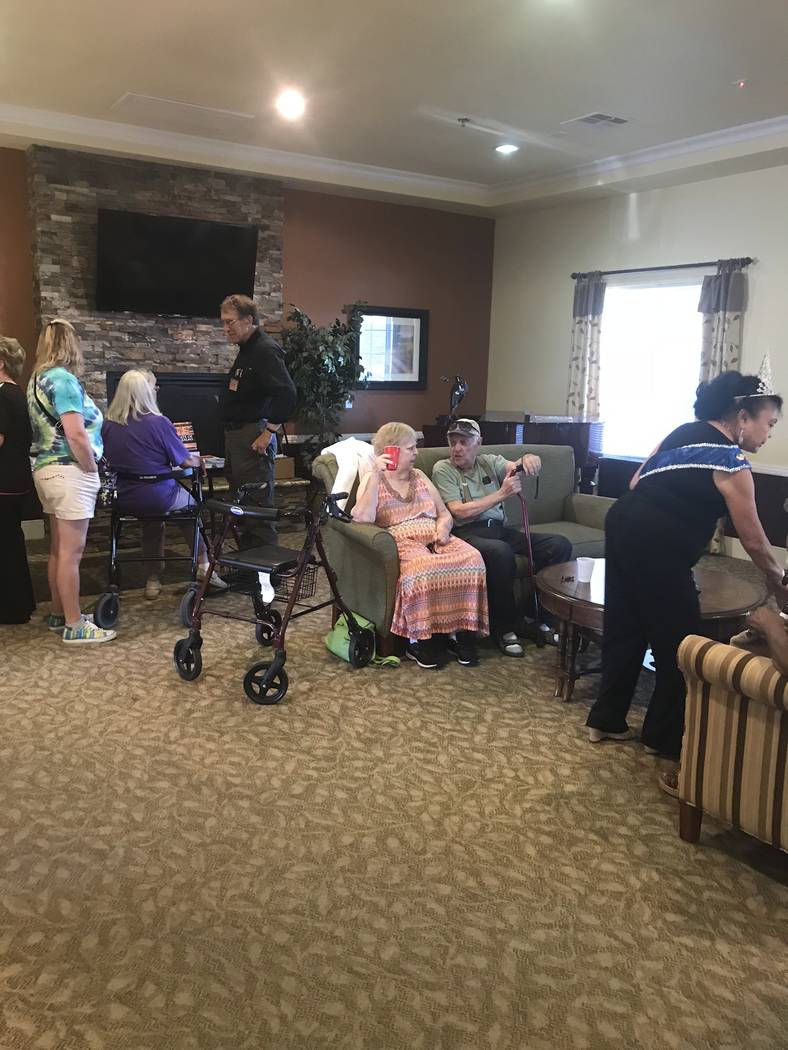 Jeffrey Meehan/Pahrump Valley Times Several people gather near the entrance of Inspirations Senior Living on July 19, 2018. A three-hour long venue at Inspirations drew out dozens of attendees in the early hours of the event that had several prizes, food and beverage options. 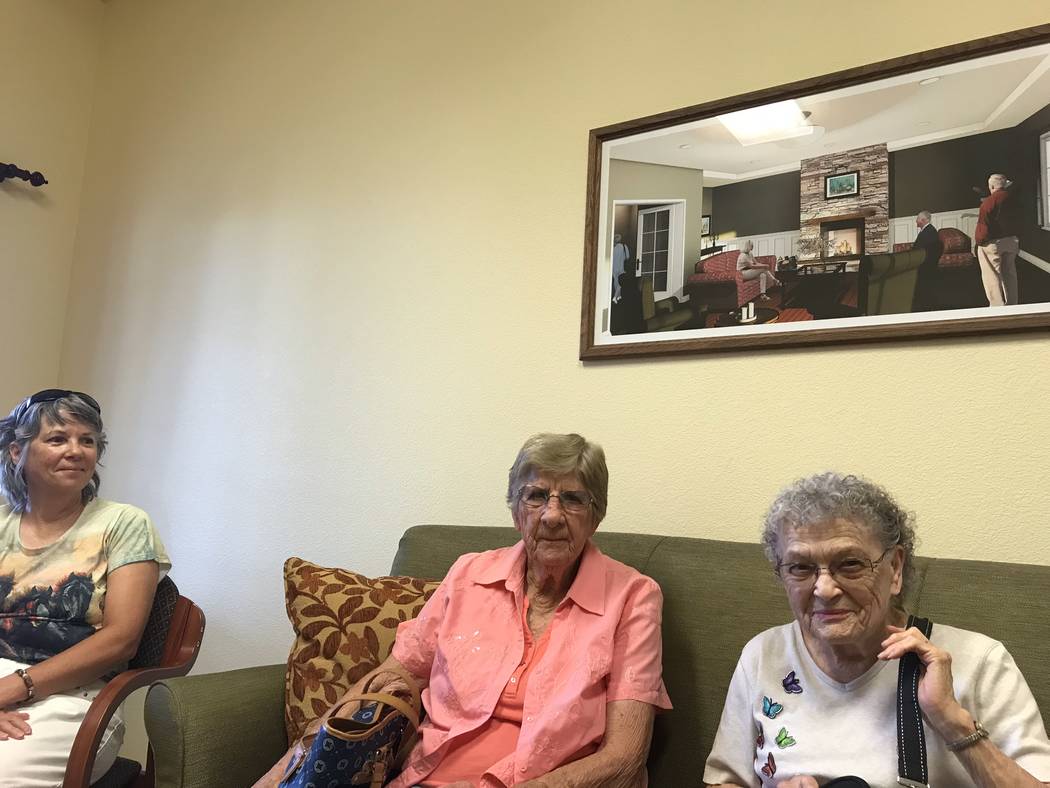 Jeffrey Meehan/Pahrump Valley Times Karen Bateman (left) sits next to her mother Frances (center) at Inspirations Senior Living on July 19, 2018. Frances is set to become a resident of the facility in July.

Local seniors and others enjoyed a night of socializing and entertainment at a local memory care and assisted living facility.

Inspirations Senior Living welcomed a few dozen people in the early portion of an open house event at the facility at 931 E. Honeysuckle St., near East Calvada Boulevard and South Highland Avenue.

Jessica Blossom, executive director of Inspirations, said the open house is something it tries to do annually, “just to get the word out there for people who might not realize that we’re on this end of town.”

Those who attended also enjoyed prizes and live music at the facility.

On the first floor, near the entrance, several people gathered to enjoy casual conversation. On the upper floor, a flute player was sending notes out to the crowd in another event space. Several local groups and small businesses had set up shop on the second floor.

Some of the local vendors included Pahrump Health, Wellness and Nutrition Center, someone from the local Farmers Market and representatives from a group called Bikers Against Child Abuse, which is trying to start a local chapter.

Blossom said many people from town were attending the event and not just older citizens.

“We find that a lot of people who move here — younger generations are moving here for one purpose. That’s because they have family here that need care that they’re caring for,” Blossom said. “So we target the younger generation, as well, so that they know we’re here.”

The center has several options for those seeking memory care and assisted living. Living spaces range from a studio up to a one-bedroom apartment.

Inspirations has been in Pahrump since 2013, though it went through a management change a few years ago. The facility is overseen by Grace Management and owned by Chicago-based Chicago Pacific Founders.

The community has grown since new management took over operations at Inspirations.

“When Grace Management took over, we kind of revamped the whole community,” Blossom said.

Before Grace came in, Blossom said, there were 25 residents; today there are 69 at the 78-bed community.

Blossom spoke to a Pahrump Valley Times reporter about some of the benefits that residents receive when they stay at the facility, including the options for transportation services, events and other opportunities and services for residents.

Some of those opportunities include entertainment, which is offered by volunteers.

“The volunteers that we have here are doing it out of the kindness of their hearts because they want to give back to the seniors here,” Blossom said.

“It’s assisted living, and there’s more people here that I can associate with,” said Bateman. “I don’t have a car, so I don’t go out much.”

Bateman’s daughter, Karen, also pointed to the amount of entertainment options that will be available for her mother. Karen is a Pahrump resident.