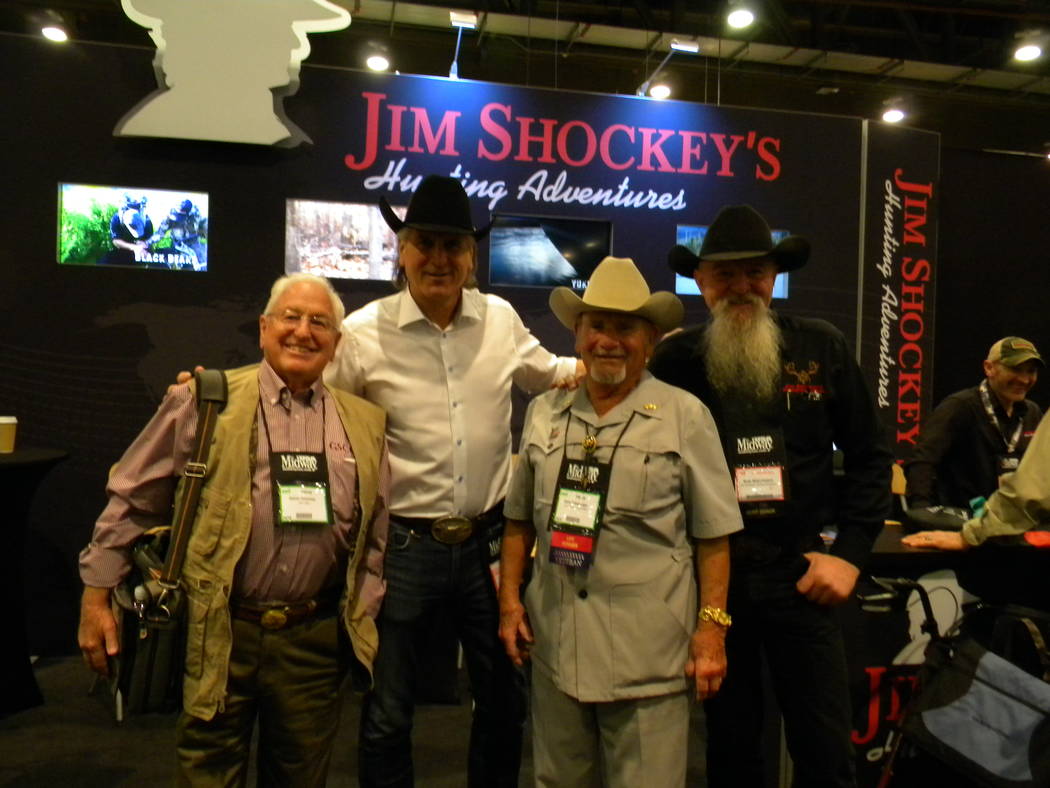 Dan Simmons/Special to the Pahrump Valley Times From left to right, Dan Simmons, Jim Shockley, Chris Klineberger and Wojo, at a previous Safari Club International Convention. The Safari Club will hold their convention in Reno starting next week. 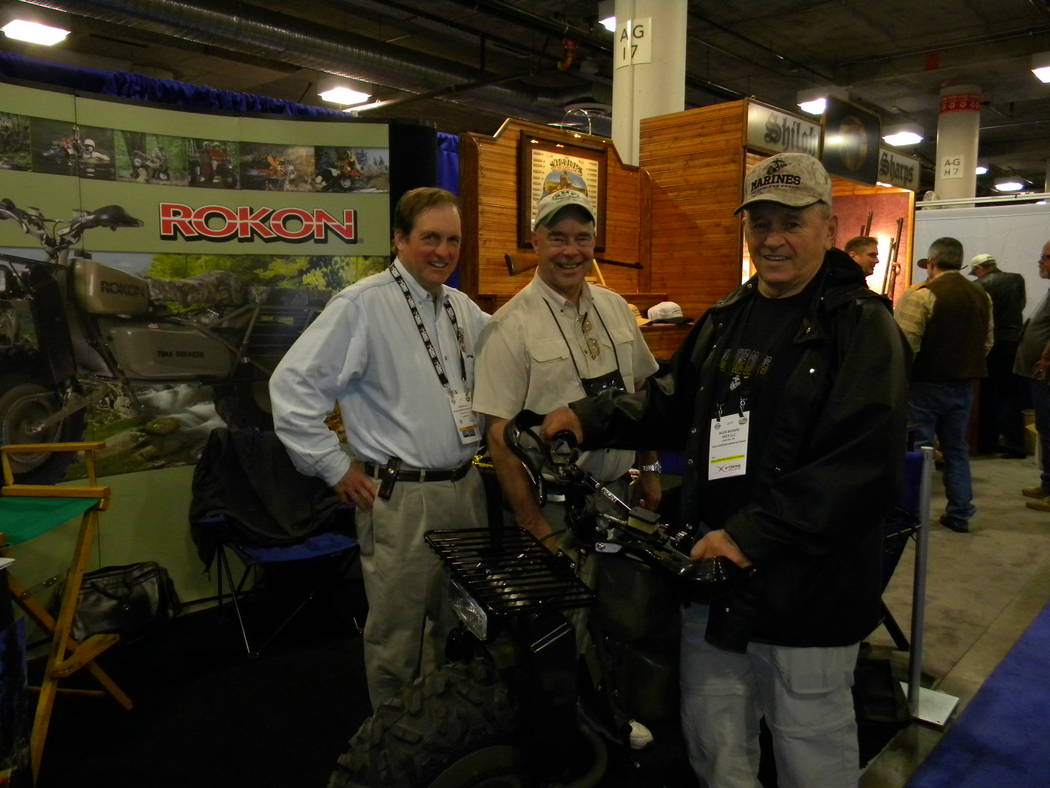 This is the season of conservation conventions and banquets. You’ve been reading about some of those in this column. They are a great chance to get together with friends, old and new. It offers an opportunity to visit with fellow hunters and conservationists from around the world, discuss new equipment, trends, government policies and the changing state, national and international regulations, and the food is always great.

Nevada sportsmen are especially fortunate to have several of the largest national conventions here in the Silver State. The king of them all is the Safari Club International Convention, starting this week in Reno. It’s the largest sporting convention in the world and will be back in Las Vegas next year.

If you go to only one of these events, this is the one, and it’s only the beginning. The Las Vegas chapter held their banquet Feb. 1, with their keynote speaker Jim Shockey telling the story of hunter/conservation efforts.

This past week the season started with a new local chapter of the Mule Deer Foundation. It was a sold-out crowd and a great success thanks to the efforts of the committee, led by Dominic and Celeste Sandoval. There were auctions and raffles, which included everything from clothing, jewelry, a great big barbecue grill, guns and hunts, including an African Safari – I won the grill, thanks. Thank the entire crew at www.muledeerfoundation.org

The Shooting, Hunting and Outdoor Trade Show (SHOT) has also just wrapped up and sportsmen were lined up to purchase trips to exotic locations, buy new guns and equipment. Hotel rooms were filled, at exorbitant prices, and buyers from both large and small retail outdoor stores were busy ordering the latest outdoor “tools and toys” for their customers back home. Times are good in the outdoor sports industry.

On the final days of the show the sun came back, temperatures were in the 60’s and many of our out-of-town guests were dreading going home, and thinking of relocating. I guess that’s what’s driving our population boom, not to mention a thriving economy and one of the best kept secrets, Nevada’s big game hunting opportunities.

The show itself was a four-day assault on a sportsman’s senses. Of course there’s lots of new “stuff” you “need”, but there are also things you need but didn’t even know existed.

There were pens and paper journals you could use in the rain, or even under water.

One of the neatest products at the SHOT show was an all-wheel drive motorcycle by Rokon. With my hunting pals Marine Corp. Lt. three-star Gen “Buck” Bedard and Ron Cross, we met Tom Blais (owner of Rokon) who told us of its history and many expeditions (fodder for a future story). Gen. Bedard even recalled their use in Desert Storm and other conflicts. Tom’s enthusiasm and spirit of adventure were infectious and inspiring; I want one and I’m ready to hit the road. This bike is not made for the Harley or Yamaha crowd, but it is designed to out-trail a horse, and it doesn’t eat as much.

It has a hitch that can accommodate a wagon, sled, plow or even a log skidder, a side-car or a power take-off unit. I think you get the idea – this is the ultimate explorer’s vehicle. I first saw it as a youngster in National Geographic, but it has come a long way since then.

Another area of major product innovation this year revolves around waterfowl hunting, with a plethora of new calls, ranging from traditional handmade wooden duck and goose callers to extravagant electronic devices that sound more life-like than the real ones. They are even species-specific and I suppose mimic regional bird dialects. It makes you kinda wonder though, whatever happened to the traditional pride of skill, developed by hours, weeks and years of practice?

The decoy business has also gone high-tech. Decoys are now motorized and can dive, swim, bob around and seem to fly with their motorized or wind-driven wings. There are even computerized robo ducks and geese.

Again, where have tradition and skill gone? Will it be left with us who are mechanically challenged and just enjoy a simple day in the field with a few “deeks” and a good dog? Will the tradition be maintained by those who simply can’t afford the many possible, but very pricey, toys? Or, like with most things, will the pendulum once again swing back to the values hunting and the outdoors exemplify?

Hunting blinds also continue to evolve with improved materials and camo design that blend with any natural habitat. There also seems to be a trend and greater emphasis on individual, rather than large refuge, lottery-style hunting. The pendulum continues to swing on this one.

Other trends at the show were lighter rifles with greater power and less recoil. The Winchester Short (WSM) and Super Short (WSSM) magnums appear to be here to stay and are expanding.

Wild game cooking was also omnipresent with dozens of booths demonstrating smoking, marinating, seasonings as well as many new equipment items. I’ll be sharing some of the best of these in future recipe articles.

The convention tradition continued, with a full day on the convention floor followed by sitting around a hotel room, or meeting at a local bar with friends as we’ve done for many years, discussing the current state of wildlife and the future of sport hunting.

This is also a time to remember a few old friends who couldn’t make it to the annual event, or were on that “Last Great Safari”, like my friend, mentor and hunting/explorer legend Chris Klineburger and his brothers Bert and Gene.

Nothing much else has changed, except the smoke, fewer drinks and earlier to bed. I guess that comes with wisdom. Or is it age? Have we also noticed the hills seem to have gotten higher and steeper? Nah, I’m sticking with the wisdom story.

Does this all sound like fun? Well it was but don’t tell the editors, they think I sacrificed four days to grueling meetings and interviews. Let’s keep them thinking that, after all, “someone’s got to do it.”