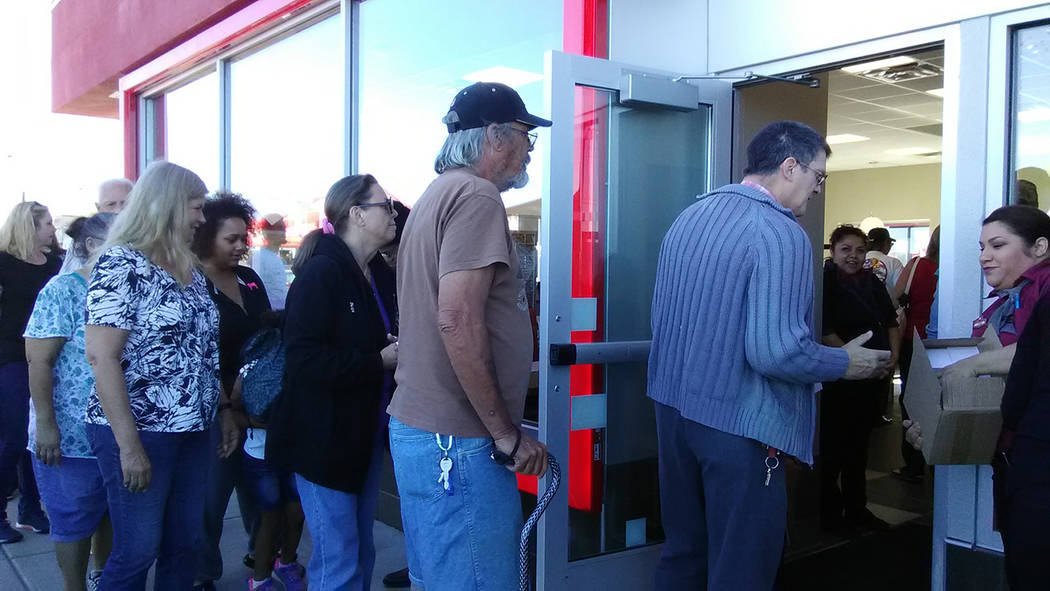 Selwyn Harris/Pahrump Valley Times Individuals and families were treated to a free mug upon entering the newly opened Jack in the Box at 640 S. Highway 160, between China Wok Buffet and Tire Works last September. Lines began forming roughly an hour before the business opened its doors at 9 a.m. 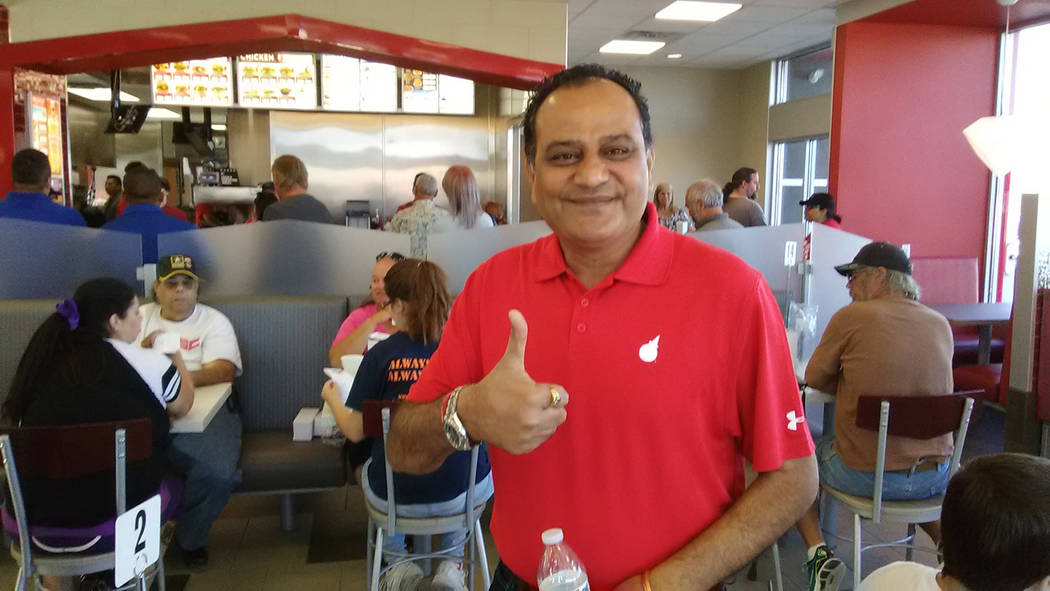 Selwyn Harris/Pahrump Valley Times Jack in the Box Franchise Owner Jyoti Madhura was overjoyed with the community response to the opening of Pahrump’s Jack in the Box on Thursday. Madhura, who held a ‘soft opening’ late Wednesday afternoon, said he hired upwards of 60 employees from the local community to staff the business.

Roughly seven months after opening its doors for business in Pahrump, the Jack in the Box restaurant at 640 S. Highway 160 is maintaining brisk sales.

On that day, franchise operator Jyoti Madhura was overcome with sheer joy as he witnessed the controlled frenzy taking place at the location.

“Without the community support we could not have done this and we are certainly going to continue to serve the community,” he said. “Our main focus is guest service. We always say one thing back to our customers, which is to say ‘yes’ to the guests no matter what. That is the principle that we follow.”

As far as the local reaction to the grand opening, Madhura said he wasn’t all that surprised.

“I know people in the community have been waiting for a Jack in the Box for a very, very long time,” he said. “I am very thrilled with the reaction from the community, and now we are finally here.”

The Jack in the Box opening marked the first new fast-food restaurant in Pahrump since March 2010 when Carl’s Jr. made its Pahrump debut.

Louise Velasco, district manager for Jack in the Box, said the project broke ground in the second half of May 2017.

Franchisee-owned Jack in the Box stores saw an increase in revenue in the third quarter of 2017, which grew by about 2.3 percent.

That number does not include stores open for less than 12 months.

New look for another eatery

A remodeling project at another popular fast food restaurant in town got underway this year.

Pahrump’s Kentucky Fried Chicken, or KFC, at 1540 Highway 372 underwent what’s known as an “image enhancement” project, which began on March 13, according to Area Manager Steve Utley.

“In our dining room, we have installed a new lobby area with a new ceiling and walls,” Utley said. “It’s a whole lobby decor package, with a new color scheme, and KFC-themed signage outside. We changed the seating and we now have new LED lighting instead of the fluorescent lights, so it saves energy. We will also have new exterior LED lighting. It looks really nicer than before.”

As a result of the image enhancement, KFC Manager Melissa Smith noted that several regulars actually inquired whether the business was shutting its doors.

“Even though our lobby and dining room was closed, our customers used the drive-thru to place their orders,” she said. “We actually put more people on the drive-through station, just to keep it going smoothly.”

Utley, meanwhile, said the Pahrump KFC location is one of several stores receiving an image enhancement this year.

“We just completed our Bullhead City store,” he said. “Obviously, we are now in the process of this latest one and then the next store will be the one in Mesquite. When everything is said and done, our customers can look forward to what is basically a brand new KFC business.”