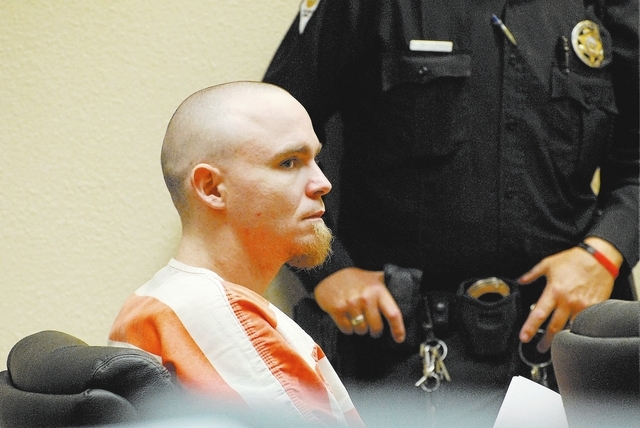 A man that led sheriff’s deputies on a high-speed chase through Mountain Falls in May was sentenced to a maximum of 20 years in prison this week for breaking into two homes while trying to elude police.

Loren Clark, 25, appeared in District Court Monday morning on charges of burglary and home invasion where he was sentenced to two terms of 48 to 120 months in prison to be served back to back.

Clark was first arrested on May 17 after a sheriff’s deputy attempted to pull him over for speeding in what police would later learn was a stolen vehicle. When he refused to stop, deputies continued to follow Clark as he led officers on a high-speed chase through Mountain Falls, driving through the neighborhood, private yards and even the golf course.

When the vehicle reportedly suffered a mechanical issue, Clark exited the the stolen car and began running through people’s yards, reportedly breaking into two homes as he tried to escape from pursuing deputies.

At his sentencing hearing, Clark’s attorney, Jason Earnest, said while he realized prison was a strong possibility for his client in this case, he would ask the sentences for the charges of burglary and home invasion be run concurrent to one another, meaning he would serve time on both at the same time.

“This is a troubled young man, clearly if you look at his criminal history, drugs are problematic,” Earnest said. “Philosophically, I think you can run these (sentences) concurrent when you sentence him to prison, which I expect you will. He’s going to have to go to California, he has a parole hold and other issues he needs to address. We’re asking you run the two counts concurrent.”

Deputy District Attorney Patrick Ferguson, however, asked that Clark be given the maximum sentence on both counts for scaring several Pahrump residents by entering their homes uninvited and destroying several thousand dollars in property by fleeing from police.

“I’m asking for the maximum sentences on these counts. Mr. Clark is already benefiting from an extremely good deal and I think four to 10 (years) is appropriate,” the prosecutor said.

Before presiding Judge Robert Lane made his ruling, Clark took the time to apologize to his victims and local police officers for his actions.

Ultimately Lane ruled Clark would spend at least eight years in prison. Additionally he ordered Clark to pay $9,585 in restitution to the victims for the damages to their property.