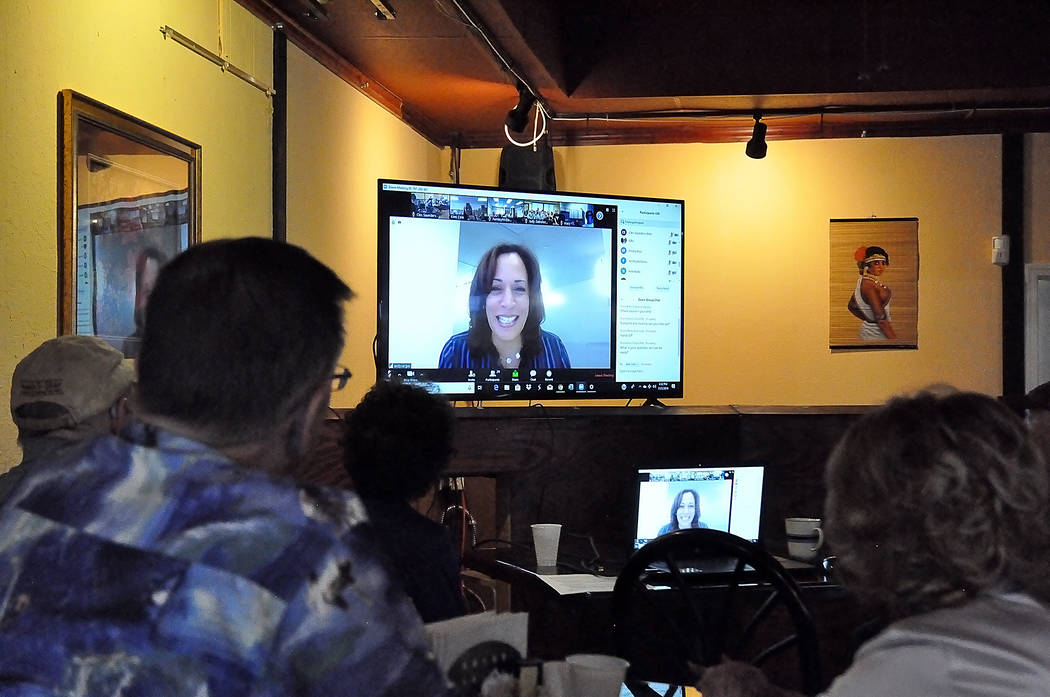 Horace Langford Jr./Pahrump Valley Times People watch Kamala Harris in a live telecast at K7 Bed and Breakfast in Pahrump on July 21, 2019. Harris was one of four candidates that spoke during the Nevada Presidential Virtual Meet 'n' Greet. 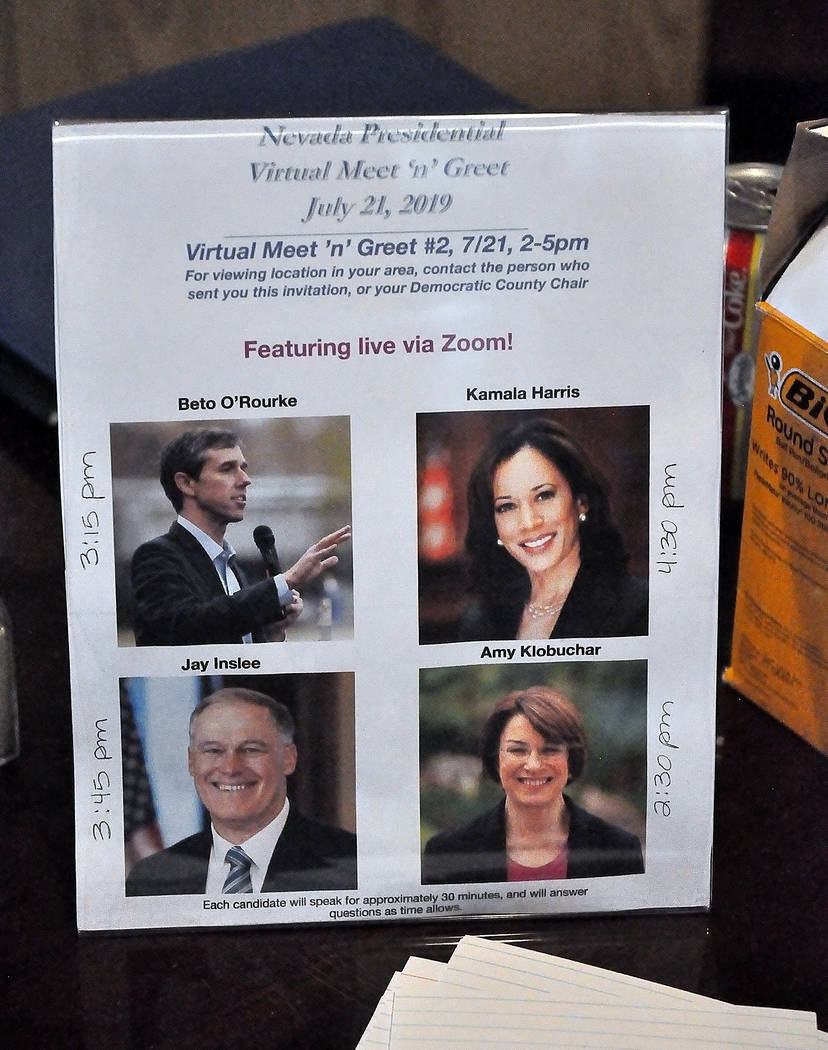 Horace Langford Jr./Pahrump Valley Times Four presidential hopefuls for the Democratic ticket were telecast live during the Nevada Presidential Virtual Meet 'n' Greet on July 21, 2019 at K7 Bed and Breakfast in Pahrump. The telecast included 16 sites around the rural parts of Nevada. 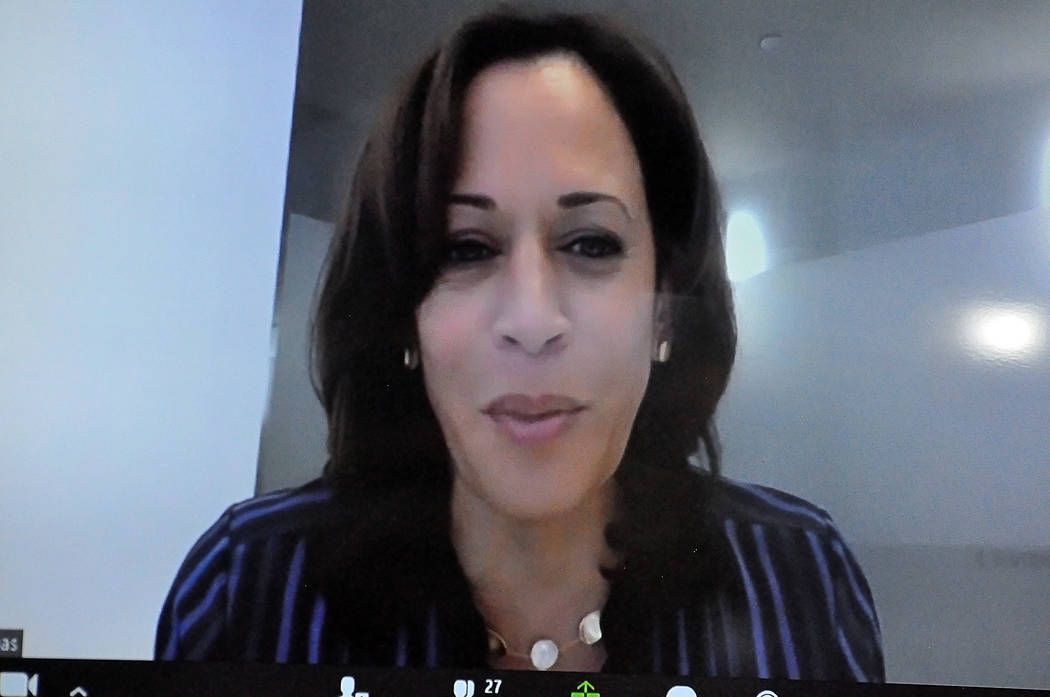 Horace Langford Jr./Pahrump Valley Times U.S. Sen. Kamala Harris, D-Calif., was one of four presidential hopefuls to speak during the Nevada Presidential Virtual Meet 'n' Greet on July 21, 2019. The telecast was viewed by people in 16 sites across the state. 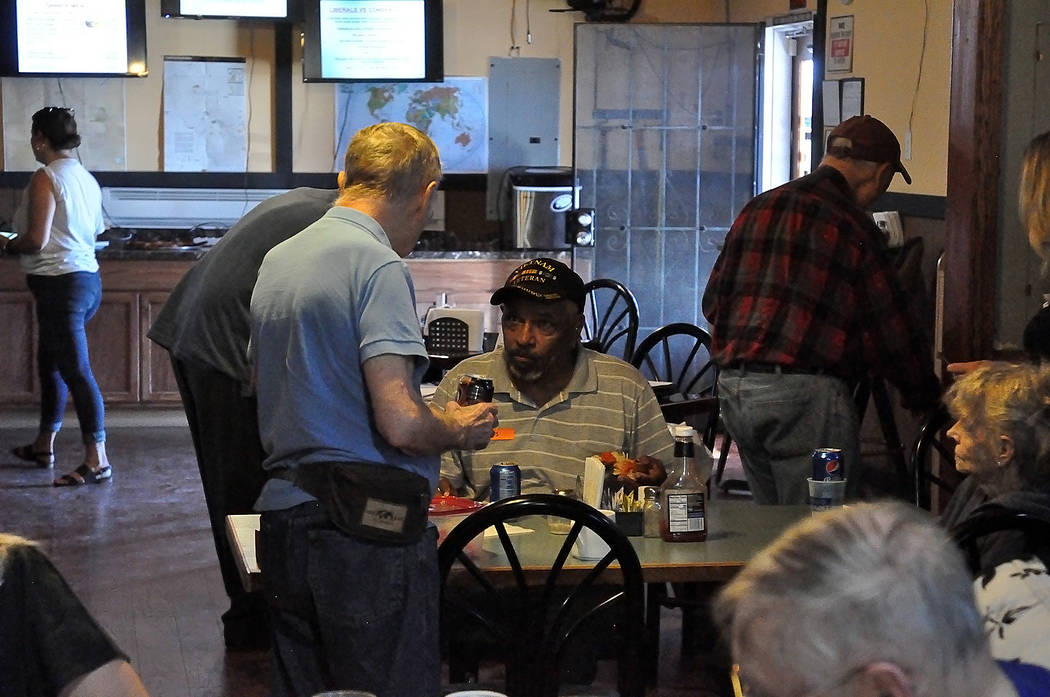 Horace Langford Jr./Pahrump Valley Times People gather at the Nevada Presidential Virtual Meet 'n' Greet on July 21, 2019. Over two dozen attended the event at K7 Bed and Breakfast in Pahrump, which was one of 16 sites four presidential hopefuls were being telecast to. 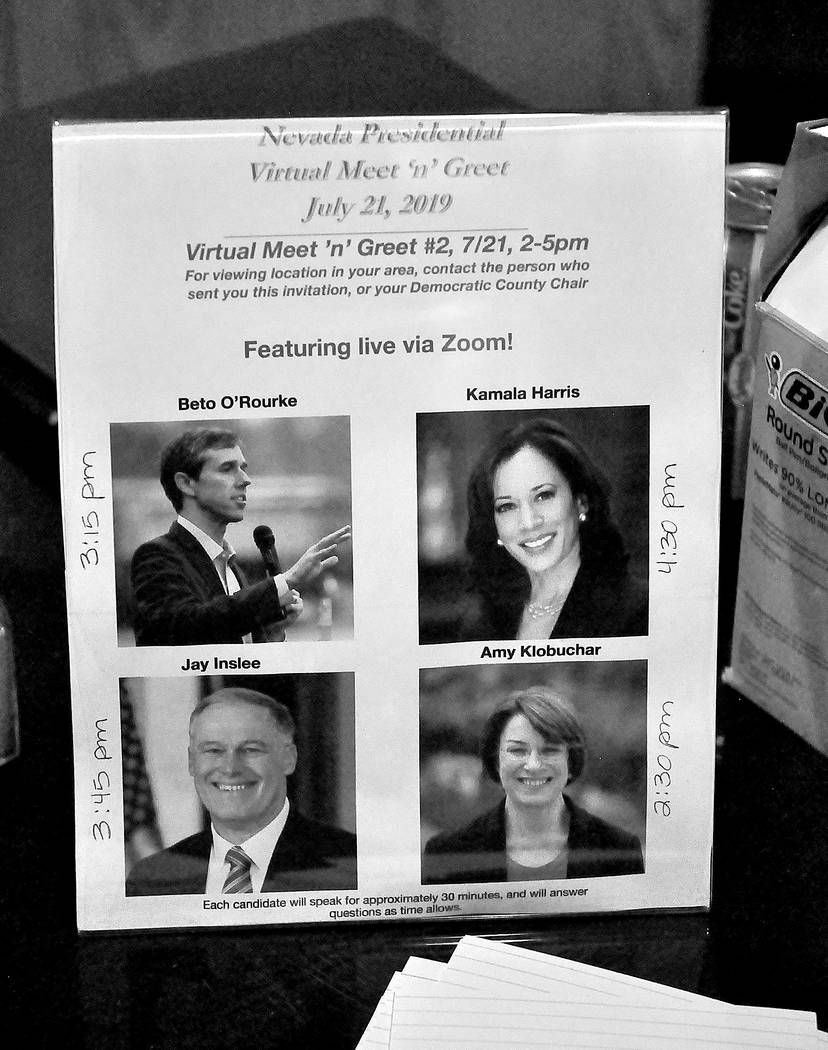 Democratic presidential hopeful U.S. Sen. Kamala Harris, D-Calif., and her team, have been moving across parts of rural Nevada in recent weeks to focus on issues facing less densely populated areas. The candidate, in a field of more than two dozen opponents, also participated in a virtual conference that was broadcast across several rural areas in the state.

“When I think about the issues as we go forward, it is through the lens, always for me, about thinking about how plans, policy, issues, impact real people in their daily lives, in their everyday lives,” she said during a digital conference dubbed the “Nevada Presidential Virtual Meet ‘n’ Greet.” The virtual conference, which allowed people to ask questions of candidates, was telecast to 16 locations in rural Nevada, including in Nye County at the K7 Bed and Breakfast in Pahrump July 21.

Harris said for that reason she asked her political director to travel across several parts of Nevada. The director traveled nearly 1,000 miles and traveled to 10 rural counties in the state in recent weeks, according to Harris.

“That kind of work for me is because we want to make sure that we are on the ground, we are present and that we are listening,” Harris said during the telecast.

Juan Rodriguez, national campaign director for Harris, said in an interview that “part of the reason we made an investment early on in the process to go to these (rural) communities and also to make sure that we have staff to organize in these communities is because the issues in rural America, in large part, sometimes have been an oversight. That’s something that we hope to change this cycle.”

Some challenges have arisen during the 2020 cycle with 20-plus candidates vying for the Democratic ticket.

“One of the challenges early on with 20-plus candidates is building to scale and making really smart investments, so I anticipate we’ll continue to grow,” Rodriguez said. “We’ve got some people that we brought on board, more folks that are coming online. That exact number will largely be determined on how this field breaks over the next couple months and how resources come to the campaign.”

Rodriguez said support has been on the rise for Harris.

“I think you saw over the last couple of weeks, post-debate, kind of an increase in overall support — not just movement in the polls, but resources as well,” Rodriguez said in a mid-July interview. “And I think if we continue on that path, and we’re pretty confident that we will, we will continue to make some investments.”

During the telecast, Harris spoke about her 3 a.m. agenda and what it means.

Harris spoke about President Donald Trump and said he has been trying over the last several years and the last several weeks “just continuously trying to divide and separate Americans, and I just reject that wholeheartedly and outright and part of how I think of it is this: The vast majority of us have so much more in common than what separates us, and I know it to be true.”

Harris continued: “I know it to be true based on what I call the 3 o’ clock in the morning thought, which is when we wake up in the middle of the night, thinking about that thing that’s worrying us, for the vast majority of Americans, that thought has to do with one of just a very few things.”

Some of the things Harris pointed to were personal health and the health of one’s family, students with school loans and several other issues, including access to broadband in rural areas and the closure of rural hospitals over the last several years.

“When I think about the priorities of our country, I really do think of it through the lens of not only the commonalities between but also just about the basic things that keep people up at night or wake them up in the middle of the night that need to be solved, and that’s why I have a plan from everything we need to do around health care to everything we need to do to pay teachers their value…,” Harris said. She continued on speaking about several of the major issues to add on to this statement.

Harris also took questions from several of the 16 sites she was being telecast in.

Harris was one of four speakers. The others were former Democratic Texas congressman Beto O’ Rourke, Washington Governor Jay Inslee and U.S. Senator Amy Klobuchar, D-Minn. Each of them spoke and engaged in a question-and-answer session for 30 minutes each.