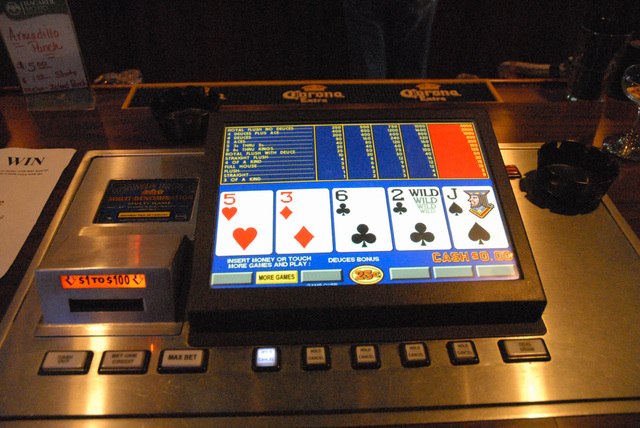 When the Gaming Control Board meets this month, two Pahrump businesses will be on the agenda for a restricted gaming license.

Keoki’s Wings N Things on Loop Road, and Karma’s Saloon on North Blagg Road will be up for discussion as establishments leasing gaming machines from Best Bet Products.

Owner Shawn Holmes said since the bars will be leasing equipment through him, Best Bet will carry the licenses. On approval, Karma’s will have nine machines, Keoki’s will have 15. He said he expects the gaming machines to be up and running Nov. 1.

Karma’s has been open since March and was granted a temporary liquor license March 26. If approved for gaming, the business will have been nine months without gaming. Keoki’s took over the Last Chance Saloon and Steakhouse restaurant in late February and the bar in April. It, too, has been without gaming for eight months.

Keoki’s circumstances differ from Karma’s in the location for Keoki’s has never closed and gaming was available until the new owners took over the bar. Asked if not having machines in the bar has affected business, manager Alice Cummings said, “It slowed down at first, but we have the NFL Ticket and our football nights are really busy. We do look forward to having the gaming back to serve our customers who want to gamble.”

Holmes, whose business serves “all but two of the bars in Pahrump” also said as of Sept. 30, the gaming machines have been turned off at K-7 Lounge on Hafen Ranch Road. “They have made some changes to the restaurant and it’s not a bar anymore,” he said. K-7 now offers an international buffet five days per week and has plans to turn the bar into a coffee house atmosphere with open mic, special performances and house-roasted coffee drinks. The alcohol is still available but the bar supports the restaurant.

Another change is on the horizon as well. According to company spokesperson Carmalen Gillilan, Tavern operator for Dotty’s, whose controversial business model inspired casino industry changes to statewide gaming regulations, will open another location here at 3610 S. Highway 160, Suite 405. The space was formerly occupied by Benderz Lounge.

Dotty’s parent company, Nevada Restaurant Services, owned by Craig Estey, who created the business model for the gaming establishment in 1995, came under fire in late 2010. Opponents said the operations were “nothing more than a glorified slot machine parlor, offering snack food and minimal alcohol while focusing solely on gaming,” according to the Las Vegas Review-Journal.

In 2011, the Nevada Gaming Commission also amended regulations governing taverns, requiring Dotty’s and similar small businesses with gaming to have a nine-seat bar, 2,000 square feet of public space and a kitchen operating at least half the time the business was open.

Even though, according to the gaming commission, Dotty’s has two years to comply with the new ordinances, it is already in compliance in the other two locations here. The establishment closed its stores in Albertson’s shopping center and in Beverly Plaza for 48 hours in July.

In that time, crews rearranged the gaming machines and installed bars with stools and wall-mounted televisions. Kitchen facilities were already in existence and the business offers hamburgers, fries and other appetizer foods.