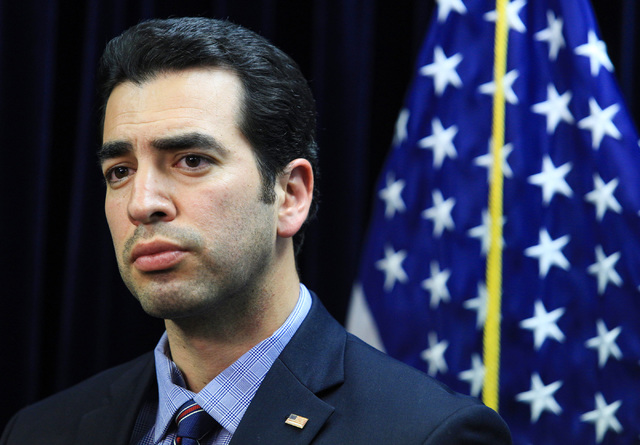 And when the first-term congressman gets his chance today before the Subcommittee on Environment, Committee on Energy and Commerce, he said on Nevada Newsmakers on Monday that he will fight a Yucca revival.

The Yucca site is in Kihuen’s district.

“The bottom line is, you have all of these other states that are generating this nuclear waste and they picked Nevada to basically come in and dump it in our backyard,” he said. “So we are going to remind them that we are not a dumping ground.”

The Yucca Mountain dispute goes back to 1982, when Congress first designated it as a permanent nuclear-waste site. And it has erupted again since the election of President Trump and the retirement of former U.S. Senate Majority Leader Harry Reid, D-Nevada.

Reid was instrumental in getting the Obama administration to defund the project in 2012, declaring the site unworkable.

Trump put $120 million in his fiscal 2018 budget blueprint for Yucca’s revival, according to Gary Martin of the Las Vegas Review-Journal Washington Bureau.

Meanwhile, Congress has not landed on another permanent storage facility and the state of Texas has sued the federal government for not adhering to the law that requires permanent disposal of the waste.

“There is a reason why the Republican Gov. Sandoval and a Republican (U.S.) senator in Dean Heller and the entire Democratic delegation is in opposition to Yucca Mountain,” Kihuen said. “Because we all know that it is dangerous and we just don’t want that nuclear waste in our backyard.”

Kihuen discounted the idea that nuclear-waste storage at Yucca Mountain would help generate jobs in rural Nevada. Kihuen represents the southern and central areas of Nevada’s great outback and acknowledged much in the area is suffering economically.

Kihuen proposed, instead, a bi-partisan infrastructure plan to rebuild schools, roads and buildings.

“I just came back from a tour in Ely, Caliente and many other areas of our state and I saw first-hand how buildings are deteriorating, how roads need to be rebuilt, elementary schools that need to be refurbished,” he said. “Why not invest that money in infrastructure and as a way to put those people back to work?

Kihuen is also concerned that one nuclear accident at Yucca would harm the states’ top economic driver — tourism — since the nuclear waste storage site is 90 miles from Las Vegas.

“We’re a state that depends on tourism and gaming and if people find out that some sort of action happened that could put their life at risk, people are not going to want to come to Las Vegas and that is going to hurt our entire economy. So this is not just a public safety issue, this is an economic issue as well.”

A majority of Nevadans feel like he does toward Yucca, Kihuen said, although he acknowledged a segment of the population sees the nuclear waste as a business opportunity.

“Most of my district and most Nevadans are in opposition to this, and again, I’m a representative of the state of Nevada,” Kihuen said. “When you have an overwhelming majority of Nevadans saying we don’t want this nuclear waste, then it is my responsibility to speak on their behalf.

“I know there are some in Southern Nevada that may be interested in bringing it here to create jobs, but again, my suggestion is let’s invest these billions of dollars into infrastructure on a bipartisan basis, Republicans and Democrats, and pass an infrastructure bill that would put people back to work,” Kihuen said. “That is my suggestion.”

Kihuen was asked if his chances of re-election hinge on the Yucca issue.

“Look, I’m focused on doing my job right now. I am not focused on what is going to get me re-elected,” Kihuen said. “This is one of those issues where it is non-negotiable.”