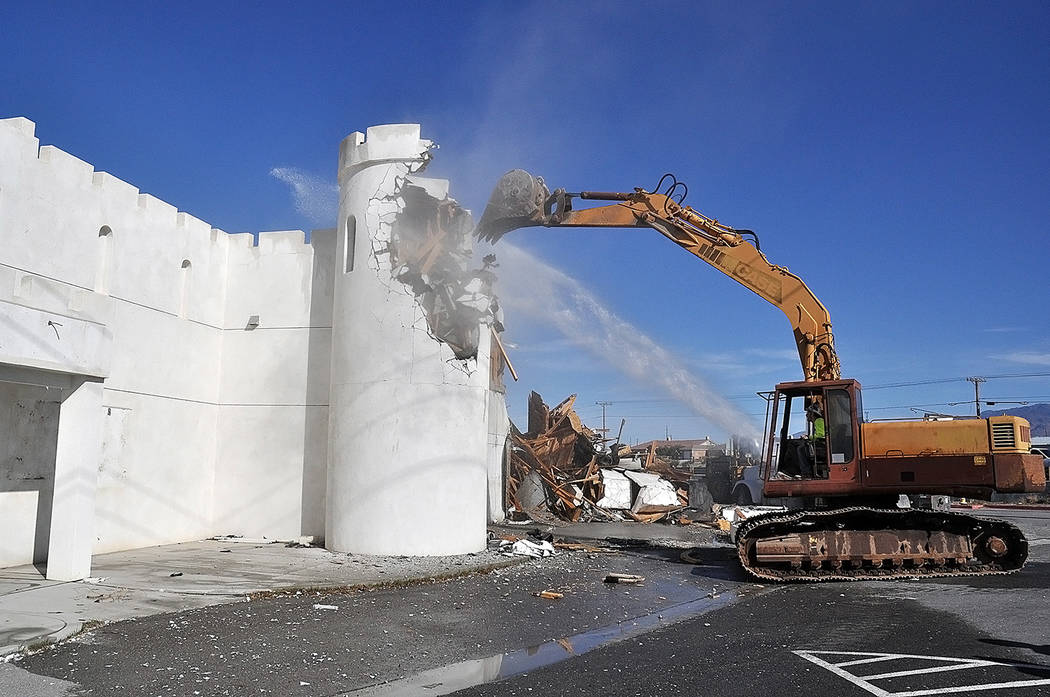 Horace Langford Jr./Pahrump Valley Times The bucket of an excavator takes down a raised section of the castle-themed Kingdom Gentlemen's Club at Homestead Road and Highway 160 on Friday March 15. After opening back in 2004, the establishment closed its doors roughly 10 years later. 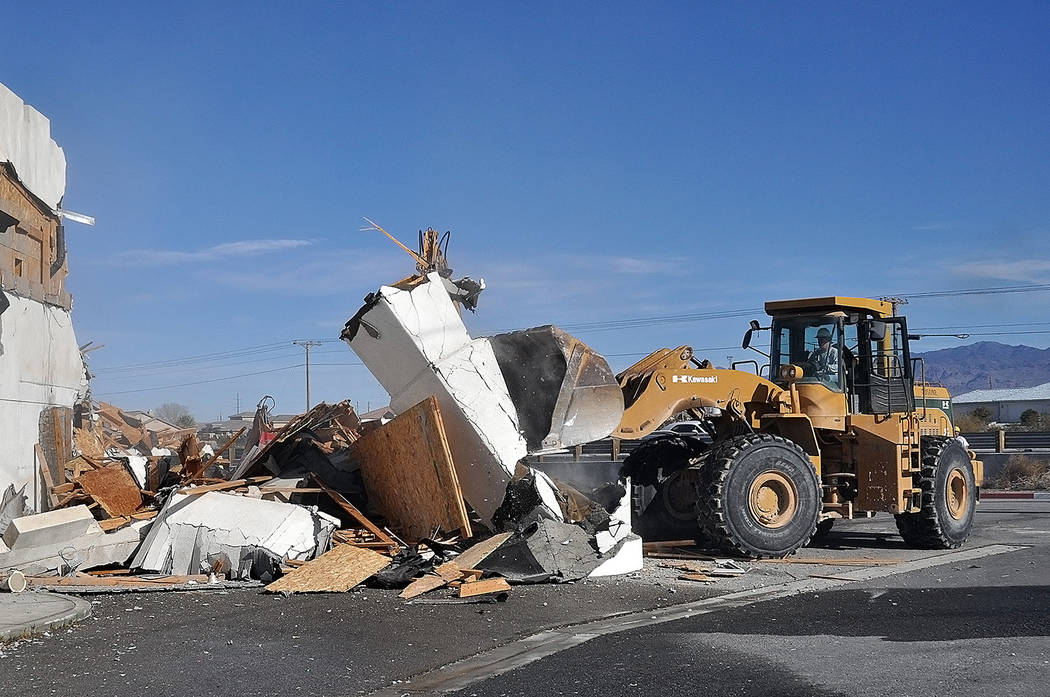 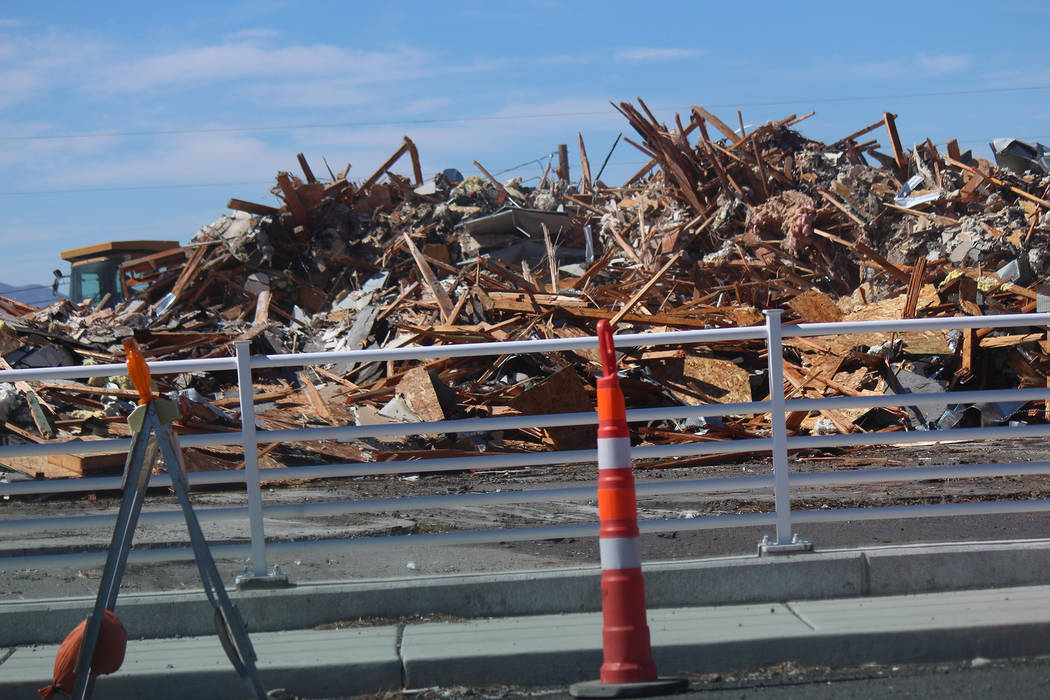 Jeffrey Meehan/Pahrump Valley Times A castle-style building that once housed the Kingdom Gentlemen's Club was reduced to rubble in March. Owners of the site at 2310 S. Highway 160 plan to redevelop the property in the future. 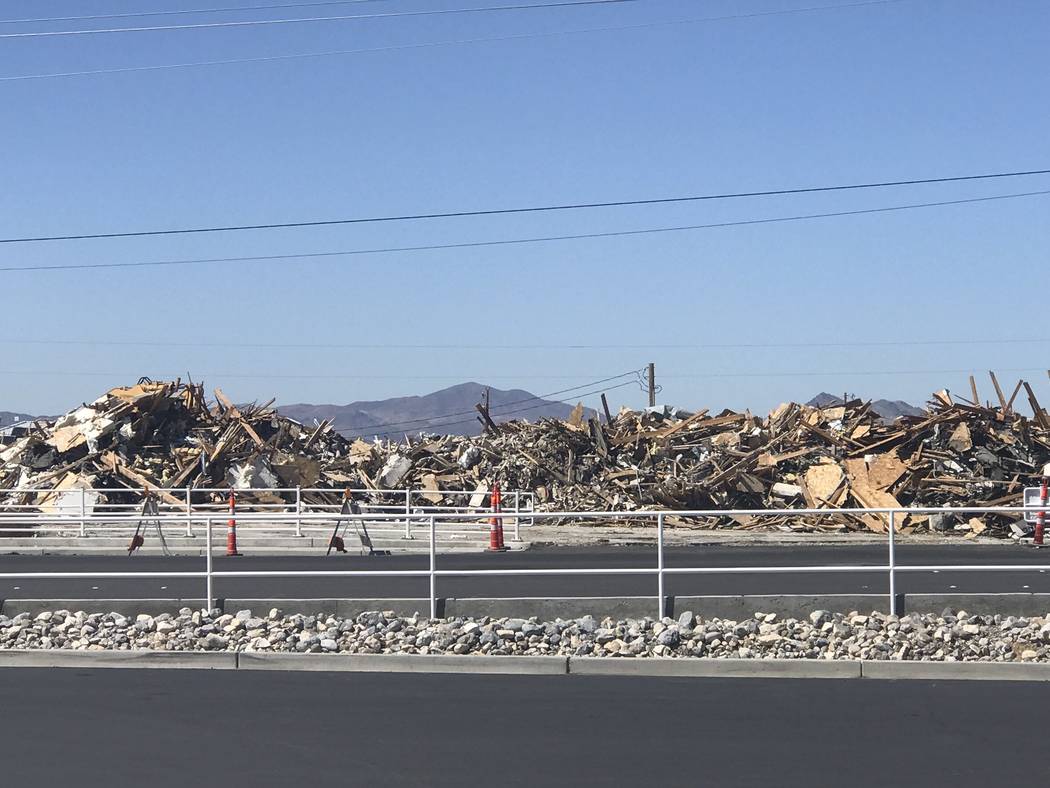 Jeffrey Meehan/Pahrump Valley Times A castle-style building that once housed the Kingdom Gentlemen's Club was reduced to rubble in March. Owners of the site at 2310 S. Highway 160 plan to redevelop the property in the future.

There’s something distinctly different about the intersection of South Highway 160 at Homestead Road, as of late.

On Friday, March 15, the old Kingdom Gentlemen’s Club was leveled to make way for a yet-to-be-revealed project.

The castle-themed building has been a fixture at the intersection since 2004.

Danny Murphy of Pahrump’s Full-Throttle Excavation said the project went very smoothly, once it got underway.

Among the heavy equipment used to take down the building were an excavator, a front loader and bulldozer.

“Actually my guys, all worked in sync, and I was very impressed with the way that they performed,” he said. “It went a lot quicker than I thought it was going to. We had people gathering around and taking pictures. Some were friends and others were just curious local residents.”

Murphy originally had plans to begin the demolition on Wednesday of last week but was forced to postpone it due to weather concerns.

“The winds were just too high,” he said. “We thought we were going to be able to start on Thursday, but the winds still continued. We are not able to do this kind of work with winds over 15 miles per hour. We actually knocked it down in just one day. It’s probably going to take us about a week or two to haul the debris off.”

Prior to leveling the structure, Murphy said efforts were made to salvage some items inside the building.

“We salvaged a walk-in freezer, and we saved the kitchen hoods,” he said. “There were also chairs, tables, and couches that we donated to the No to Abuse organization. They were very appreciative of the donations.”

Murphy also said some of his crew members salvaged a few items.

“My brother-in-law took the stripper poles,” Murphy said with a laugh. “Some of my guys also took some of the memorabilia that was hanging on the walls. One of them took the occupancy sign, but I’m not sure why. They just wanted to have a little piece of the former Kingdom Club.”

Before the demolition project even began, Murphy noted that a few local residents also wanted a few items, at great risk.

“Somebody went in there and stole the breakers out of the breaker panel,” he said. “They were very expensive breakers, and they stole them when the panel was actually live. We also had a lot of these so-called tweakers trying to steal the wire. They were stealing wire as we were trying to take the building down.”

Additionally, Murphy said some individuals got a bit creative as they sought items at the demolition site.

“There were some of them who even put on vests and hard hats, and there was one guy who actually put an amber flashing light on the roof of his car,” he said. “He also had a vest and hard hat on and we told them to leave. These guys go around to different construction sites, acting like they are workers but they are actually stealing stuff.”

This week, Murphy noted, crews will begin the task of clearing all of the debris from the site.

“We will be using a dozer to smash it all down, and running it over with the dozer along with spraying it down with water,” he said. “We then will start hauling it off. Between this week and next week, it should be all gone.”

Regarding his personal thoughts on the establishment, Murphy didn’t appear to have a very strong opinion.

After closing its doors in 2014, the site was purchased the following year by a Utah company.

“I think it could have been remodeled, just save some money, but I don’t know that for sure,” he said. “The new owners wanted the building down. They said they were having a hard time selling it because it was a strip club at one time. They thought they could sell the property easier if the building was gone. I really don’t know what will become of that piece of property.”