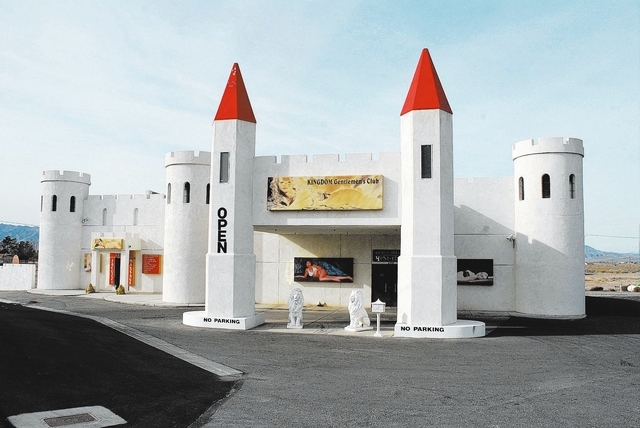 The future of the Kingdom Gentleman’s Club at Homestead Road and State Route 160 may be determined by the Pahrump Town Board and Nye County commissioners.

Owner Joe Richards said last week that he would agree to move the adult themed business away from one of the busiest intersections in town if town and county officials allow the de-annexation of property located on Homestead Road in Pahrump’s so-called “Red Light” district.

Town board members were scheduled to vote on the item during Tuesday’s board meeting.

Due to time constraints, results will appear in Friday’s edition of the Pahrump Valley Times.

On Monday, Pahrump Town Manager Susan Holecheck said even if the town board approved the action, it still remains to be seen if county officials follow suit in the process.

“Nobody knows right now and to be honest, we don’t even know how the county is going to react to this. I met with Amy Riches and I met with Gary Hollis. Gary is representing Joe Richards and Gary feels that he is in a position to make representations for Mr. Richards,” she said.

Richards owns the land in question said he will likely be able to develop another adult-themed business at that location or at least get zoning approved that will make his property near the two major brothels along Homestead more valuable.

According to backup material for Tuesday’s agenda, in the early 1990s, the 10 acres of property was zoned to be within the Town of Pahrump boundaries.

While the property was designated as “Brothel,” the town does not afford the proper licensing thus the property should be de-annexed in return for an agreement regarding the future of the gentleman’s club at Homestead and State Route 160.

Richards noted that he previously had an adult-themed business adjacent to one brothel.

“Venus Massage Parlor &Madam Butterfly’s Bath &Massage Parlor was kiddy-korner from the Chicken Ranch and that was years ago. It was a triple-wide mobile home at the time and I was all set to do something down there. I then moved it back up on the corner at Homestead and 160. All they have to do is go ahead and zone that brothel down there and if they do, I will move and it will be the end of all the adult stuff on the corner,” he said.

Holecheck, meanwhile, said if the proposal is approved by town and county officials, no adult-themed businesses can set up shop at 160 and Homestead from here on out.

“Mr. Richards is anxious to move forward on those 10 acres. In exchange for correcting what they believe was an oversight on a zoning issue, they will ensure that the Kingdom is torn down and that the grandfathered ability to have a sexually oriented business at that location will be given up. That corner at Homestead and 160 will only be zoned as commercial so we won’t find ourselves in an instance with another sexually oriented business on that corner,” she said.

Several years ago town officials investigated the possibility of purchasing the gentleman’s club through a partnership with Nye County to turn the site into a Welcoming Center that would house the Pahrump Valley Chamber of Commerce.

Nothing came from that suggestion.

Holecheck said the action is necessary due to an increase in additional duties performed by town employees over the years.

Holecheck said she feels that the verbiage describing the positions needs to be made to better reflect the work being performed.

“Those positions are the ones that I felt were problematic. They don’t match what the people are doing,” the town manager said.