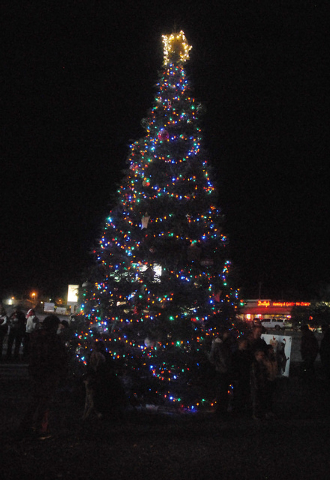 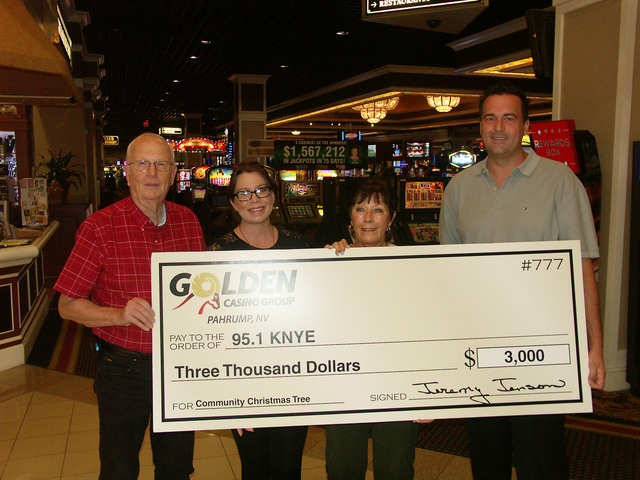 The owner of Pahrump’s sole radio station says she no longer wants to kill trees in order to celebrate the Christmas holiday season.

KNYE 95.1’s Karen Jackson is opting for what she believes is an environmentally friendly alternative.

Jackson said she will no longer use fresh trees for Pahrump’s community Christmas tree as she has for the past several years at roughly $4,000 a pop.

Instead, the station owner plans to use an artificial variety, but she needs help from local residents and businesses to make it happen.

Officials at the Pahrump Nugget presented her with a check for $3,000.

Jackson says she has already picked out the perfect tree.

“I’m tired of killing these beautiful trees. I went online and found a beautiful realistic artificial tree. It’s 30 feet tall and yes, it’s initially $17,000, but if everybody thinks about it, we’ve already got $12,000 involved with the trees we threw away. This is something that will be everlasting and it’s guaranteed for 30 years, and it’s beautiful,” she said.

“The community actually contributed to this. We donated a dollar for each buffet and we’d like to thank everyone who came through,” he said.

Jackson also has another ally for the cause.

Business owner Ron Frazier of Frazier Furniture agreed to donate a portion of his sales for the community tree.

Frazier took on a humble tone when asked about his offer of support.

Jackson, meanwhile, said the artificial spruce tree she is eyeing comes with special features such as lighting and even its own star.

“What I really like is the fact that we can adjust the height of the tree by ordering another ring to make it 35 feet and it’s also guaranteed by the manufacturer. What’s really nice is there will be no delays in getting it put up. It’s all lit and people can decorate the top and the kids can have a ball. Last year, our tree was a week behind because there was some bad weather and they couldn’t get it out here,” she said.

One major concern Jackson has is the time frame.

“I have to order it by mid-September. People can make their checks payable to “Christmas tree” and drop it off at the front desk at Best Western 24/7. Ron and Marion Frazier will have a drop-off box at their store at 1241 E. Calvada Blvd., or they can just mail it to the station at 1230 Dutch Ford Rd.,” she said.

Additionally, Jackson spoke about what the community Christmas tree meant to some local homeless families as she has witnessed for the past three years.

“They’re homeless and they don’t have Christmas. Every day that tree is up, I see families around that tree taking pictures so it’s just as important to this community and the less fortunate that we have this tree, and that’s why I started it,” Jackson said.