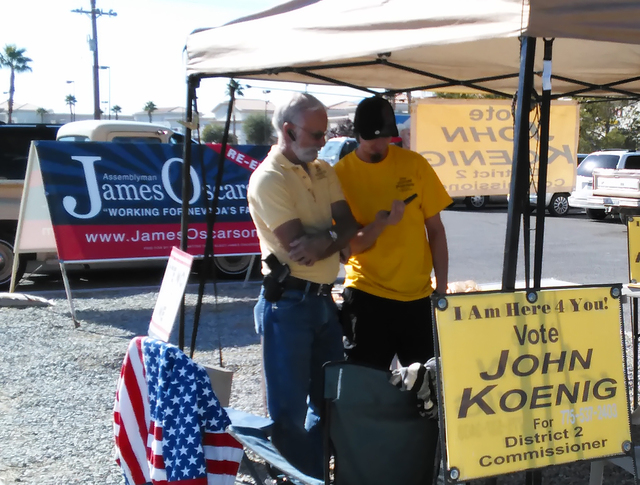 After earning more than 70 percent of the vote, Nye County Commission District II candidate John Koenig will fill the seat of Frank Carbone in January.

Koenig, a Republican, said his win confirms that Nye County residents agree with his political views.

“I am really humbled and once again it confirms my belief of the way things should be happening,” Koenig said this week. “I got 70 percent of the vote and that tells me that at least the people in District II feel the same way I do.”

As a brand new commissioner, Koenig said he’s confident the five-member board will work well together in moving the county forward on numerous issues.

Koenig has experience working on county boards having been chairman of the Pahrump Regional Planning Commission, as well as being a member of the Nye County Regional Transportation Commission, both appointed seats.

Although he doesn’t take office until Jan. 3, Koenig and his future fellow commissioners can expect a busy week, as the Nevada Association of Counties convention rolled into town on Tuesday at the Pahrump Nugget Events Center.

“It’s being held in Pahrump this year and I think that’s a big plus for Pahrump,” Koenig said. “There will be over 200 people coming in from every county in Nevada.”

Koenig noted his first order of business as a commissioner will be revealed on his first day on the dais.

He also said the board will select a new chairman during a meeting early next year, a position currently held by outgoing District II Commissioner Carbone, who did not seek re-election.

“As far as who will be the next chairman of the board of commissioners, that will be voted on during the January meeting because the chair changes every January,” he said. “I just want to say that I am very grateful to the voters and everybody who donated to my campaign and those who contributed their support with their slaps on the back and handshakes.”

During his campaign, John Koenig pulled no punches while explaining the differences between him and his opponent.

He suggested that he’s more fiscally responsible than his opponent.

“Harley’s leadership when he was chairman of the Pahrump Town Board several years ago, helped lead to the town board’s disbandment by voters and county commissioners,” Koenig said.