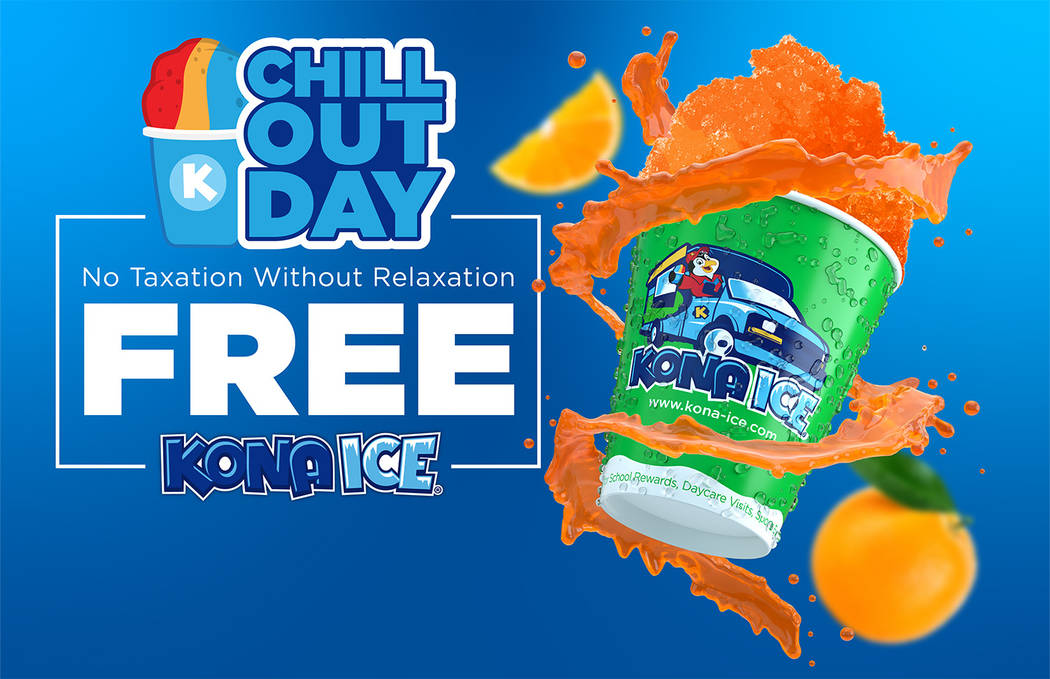 Special to the Pahrump Valley Times During "National Chill Out Day," Kona Ice will provide free shaved ice treats at the VFW Post 10054 from 2-to-4 p.m. on Monday April 15, which is federal tax day. The VFW is located at 4651 Homestead Road. The refreshing treat will ensure that there is "no taxation without relaxation this tax season," company officials said.

As parts of the upper Midwest are getting pounded with upward of two feet of snow and below-freezing temperatures courtesy of Mother Nature, residents in Pahrump can look forward to chilling out a different way on Monday, April 15, with a free frosty treat courtesy of the folks at Kona Ice.

The annual event is officially known as “National Chill Out Day.”

It should be noted that the weather forecast in Pahrump on Monday calls for pleasant, sunny conditions with a daytime high temperature of 77 degrees.

As stated in a media release, the annual nationwide event was created by the company to help relieve taxpayers of the stress associated with meeting Monday’s federal deadline for tax day.

“The island-inspired truck will be parked at the Pahrump VFW Post 10054 at 4651 Homestead Road to hand out free cups of tropical shaved ice to all who stop by,” the release stated. “The refreshing treat will ensure that there is no taxation without relaxation this tax season.”

Though the event has been in existence across the country for the past six years, Las Vegas Kona Ice franchisee Jim Karr said Monday marks the second year Kona Ice has made a stop in Pahrump for tax day.

“We will be at the VFW Post from 2 to 4 p.m. on Monday, April 15,” Karr said. “We had quite a turnout last year, but I think we’re going to have a massive one this year. We have 10 different flavors of Kona ice, and 20 serving stations so we can serve a lot of people.”

Something different this year

Unlike last year’s event, Karr said this year he’s added a twist, to the benefit of the VFW Post.

“We’re holding a canned food drive, called Cans for Kona,” he said. “We want to help the VFW fill their food pantry and we have two schools, which are Hafen and Floyd Elementary, and we’re urging kids to bring a canned food item to school, with their parents’ permission. We also have freezers for perishable food items. We are driving up to Pahrump and we are going to pick up the cans from those two schools.”

Karr also made sure to note that the kids or other members of the community need not bring a can to get a free Kona Ice cup.

“We are hoping to fill the VFW food pantry,” he said. “I am also a veteran so I kind of like doing things for veterans. National “Chill Out” Day is one small, yet powerful, way Kona Ice hopes to put a smile on peoples’ faces. I’m retired, but giving back to the community is always a good thing. To me, it’s not so much what you make in this life but it’s what you actually give is what’s important, and we love giving back to the community.”