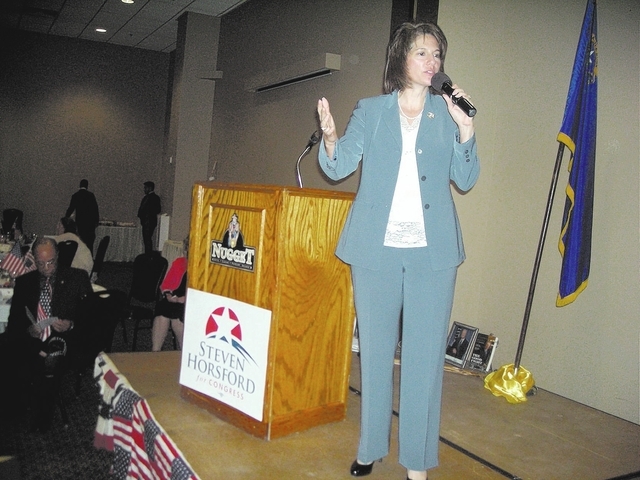 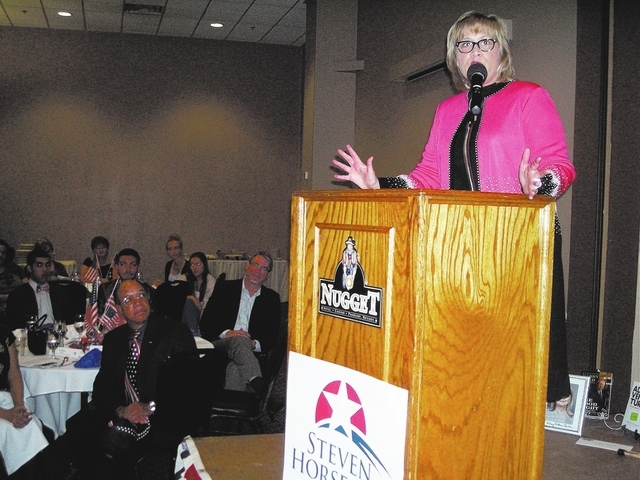 Pahrump Town Board member Harley Kulkin, who previously lost races for county commissioner and state assemblyman, confirmed he is running for lieutenant governor during a speech at the annual Jefferson-Jackson Dinner at the Pahrump Nugget Hotel and Casino Saturday night.

“As we all know, Democrats don’t do well in rural Nevada. So a Democrat has to move to Las Vegas or Reno or run for statewide office. The lieutenant governor’s office works with economic development and tourism. That’s what I’m into,” Kulkin told Democrats at their annual dinner.

Local Democrats weren’t the only people at the dinner. A pair of state officials were in attendance, despite Nevada Day weekend festivities across the state.

Kim Wallin, first elected as state controller in 2006, announced she will run for state treasurer to succeed Kate Marshall, another Democrat who plans to run for secretary of state in the musical chairs in Carson City due to term limits.

Wallin said she was the first certified public accountant elected to her office in 40 years and first certified management accountant. A native Nevadan, she recalled visiting Pahrump when there was still a cotton gin and cotton fields. The controller prepares the annual financial statement and collects debt owed to the state.

“When I came into this office as controller we were only collecting about 4 percent of the debt. We got it up to 28 percent in 2011. The 2011 budget cuts, in the infinite wisdom of the governor’s budget, recommended let’s get rid of my assistant controller who oversees collections. Our debt collection went down to 19 percent. This year in their infinite wisdom we got the assistant controller back. So we hope to get debt collection back because with all of us suffering in the cities, counties and state, it’s important that we collect every single dime that is owed to us. If we did a better job collecting money that is owed to us, we wouldn’t be worried about finding other taxes and raising taxes,” Wallin said.

She pledged to continue looking for waste and inefficiencies. “We were going to reissue a check somebody had lost, we’re printing out 12 pieces of paper to reissue that check. Why? We’re not any more.”

A reason she wants to serve as treasurer is the state needs to replace its statewide accounting system. Wallin said she wants to make sure they have the right system and do it right.

“I also want to improve upon the good work that Kate has done as treasurer. She has gone and improved the unclaimed properties. I don’t know how many of you have been able to get your money back, but she’s done a fabulous job,” Wallin said.

She also wants to ensure the Millennium college scholarship program has funds for student loans or even expand it.

Openly gay State Assemblyman Andrew Martin, D-Las Vegas, introduced his same sex spouse in the audience while announcing he would seek to replace Wallin as state controller. Martin said he is a certified public accountant, a former federal government auditor, investment advisor and in his first term in the Nevada Legislature served on the Nevada Economic Forum, which makes projections on the economy the governor uses in drafting his budget.

Speaking of his engagement after 27 years, Martin said, “these are the things worth fighting for. These are the times that are exciting to be in the legislature. We can work for organized labor, we can work for the working men and women in the state and in this country.”

He wants to continue Wallin’s work.

“You need someone who’s extremely qualified. What do I mean by qualified? You’re basically the chief monitor. You’re basically the monitor protecting the bond ratings of this state. So when Winnemucca or Pahrump go into the credit markets, the credit rating is solid. You need to be able to have a dialog with bond rating agencies. You need to understand what the audit is,” Martin said.

Attorney General Catherine Cortez-Masto is also term limited, but wouldn’t disclose any plans to run for another office. She detailed her accomplishments since January 2007. Her biggest task was helping people suffering in a state with the worst mortgage crisis in history, ground zero for the crisis nationally, using one of the smallest attorney general’s offices in the country, with a staff of 365 employees including 155 attorneys and 48 peace officers.

“What we were seeing in this community and hearing from all of you that filed complaints in our office, staff got together, we triaged, we discussed what we were doing and it was to fight the mortgage crisis, among everything else we were doing. That’s why it was so important for us to bring the first lawsuit against Bank of America. We were the first one in the country along with Arizona to go after Bank of America,” Cortez-Masto said.

That led to a settlement that she was allowed to review for only two weeks. Like a good attorney, Cortez-Masto said she drew up 36 questions. When her questions were leaked to the press, federal officials contacted her within 24 hours, the fastest she’s had a response.

“At the end of the day though I wasn’t happy with all the terms in it, there were a lot of terms that brought relief to homeowners,” Cortez-Masto said. “To this day we have brought in the State of Nevada close to $1.9 billion in relief to homeowners in this state, with more coming.”

That was followed by lawsuits against the Royal Bank of Scotland, bringing $40 million in relief to homeowners and last week, Deutsche Bank agreed to settle, another $11.5 million. She said the settlement money has been earmarked for Housing and Urban Development counselors and legal aid counselors in the Home Again program, which is free to distressed homeowners.

She said comprehensive immigration and marriage equality for gays is important.

Cortez-Masto said she just came from a candlelight vigil for the shooting victims at Sparks Middle School. There needs to be more done to see the type of tragedy that happened in Sparks doesn’t happen in Nevada communities, she said.

“I go into the schools. I talk to the kids. I talk about tolerance. I talk about respect, why it’s important, why kids need to understand there’s somebody who loves them that is willing to talk to them and listen to them,” the attorney general said.

After a couple of years in which Nevada led the nation in women murdered as a result of domestic violence, the most recent study put the state 16th, Cortez-Masto said. She said two legislative sessions ago she introduced a bill to create a domestic violence review team.

Nevada Democratic Party Chairman Roberta Lange applauded gains like the re-election of U.S. Sen. Harry Reid against a Tea Party favorite in 2010 and President Barack Obama carrying Nevada in both 2008 and 2012. She said the state secretary of state’s office was probably one of the most important.

“We have those in the Legislature who passed legislation to have our voter registration go to the last week of the election to do some other things and they passed the Assembly, they passed the Senate and our governor vetoed it. If that’s any indication of what Republicans would do in the Nevada Secretary of State’s office we need to protect this office,” Lange said.

Christopher Preciado, chairman of the Stonewall Democratic Club of Southern Nevada, a gay rights group, said Republicans can put on airs about being the party of equality but still field candidates like former Alaska Governor Sarah Palin and U.S. Rep. Michelle Bachman, R-Minn.

“President Barack Obama said, quote, our journey is not complete until our gay brothers and sisters are treated as equal under the law,” Preciado said.

Harriet Schutsch, state director of UnitedWomen.org, pushed to persuade the Nevada Legislature to pass the Equal Rights Amendment, which didn’t pass the required number of states in the 1970s to become law.

“Apparently it still can be ratified in this state. There is a special consideration constitutionally that it has not expired, that we can take it to the Legislature,” she said.