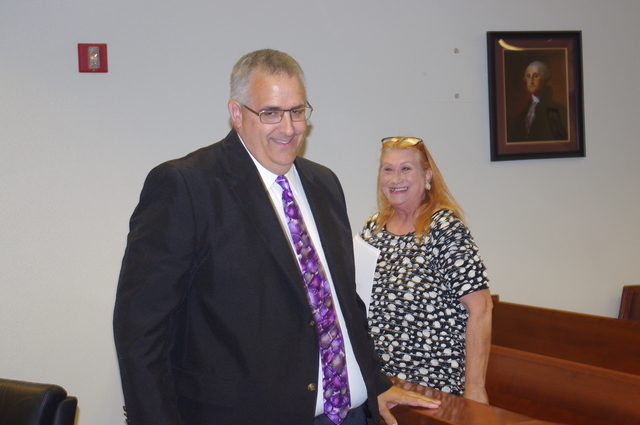 Nye County District Attorney Brian Kunzi has applied for a seat on the new Nevada Court of Appeals, just approved by voters in the Nov. 4 election.

“I have a lot of irons in the fire,” Kunzi said. “It’s unfortunately way too early to really know where I’m going. There’s a lot of things that have come to me that I’m exploring. I’m not fearful at not having something to do in January.”

He said that includes the possibility of getting into private practice.

Kunzi was defeated in his bid for re-election by Angela Bello, 7,388 votes to 4,618, a margin of victory of 61.5 percent to 38.5 percent. Approximately 53 percent of the voters statewide approved ballot question No. 1, creating the new court of appeals, though the measure lost in Nye County by a wide margin.

The application deadline for the new appeals court closed quickly, a week after election day. There’s a judge representing each of three departments on the court, the governor will pick from a short list of three applicants for each of the three departments, Kunzi said.

“They’re moving very quickly. My understanding is they want to have the appeals court seated and start hearing cases in the middle of January,” Kunzi said.

“I think I bring a tremendous amount of diversity of experience out of litigation in a lot of different areas they’re looking for. I think one of the biggest benefits is I’ve practiced all over the state,” Kunzi said. “I’ve done trials in almost every county in Nevada.”

Before being elected Nye County D.A. in 2010, Kunzi was a senior deputy attorney general specializing in workman’s compensation and insurance fraud cases. He was a one-time district attorney of Mineral County. In the Navy, he was a Judge Advocate General (JAG).

“They may be looking for siting judges but I think what I tried to emphasize in my education, one of the functions we do as district attorney every day we are required to issue opinions on different parts of county government. I write opinions all the time, analyzing what the law is. That’s exactly what the Court of Appeals does,” he said.

The Las Vegas Review-Journal said the names of the finalists will be given to Gov. Brian Sandoval so the judges can be seated Jan. 5.

Kunzi shrugged off the results of the election in his first telephone interview since Nov. 4.

“That’s politics in Nye County when you have ‘D’ behind your name,” he said.

Kunzi is a Democrat, the only member of his party to hold countywide office for the last four years. Bello is a Republican. But his campaign slogan de-emphasized his party label saying,”Just results not politics.”

But despite that appeal, Kunzi said, “If I had changed my party affiliation three years ago I wouldn’t even have had an opponent.”

Likewise, if he is appointed to an appeals court position it will be made by a Republican governor.

Kunzi said he will certainly reach out to Bello to educate her on pressing matters. “I certainly will not leave anybody in the lurch,” he said.